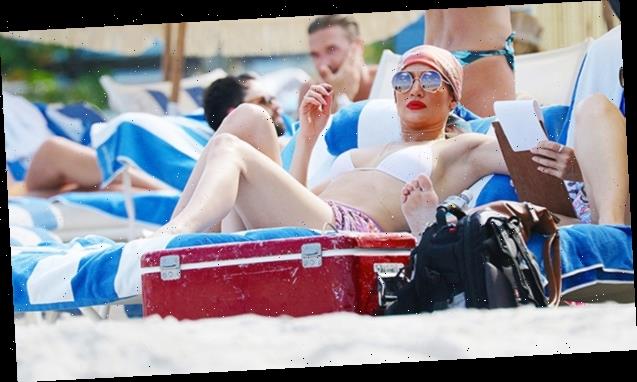 Jennifer Lopez opens up about that white bikini selfie seen around the world, and reveals why she posted the post-Super Bowl pic!

Fresh off of stunning the world (and enraging a few conservative moms) with her sexy Super Bowl LIV halftime show, Jennifer Lopez sat down with Oprah Winfrey and discussed something important: that bangin’ white bikini selfie. The Instagram photo, posted February 16, showcased the 50-year-old performer’s incredibly toned body, that was so impressive that it launched a viral body positivity challenge. Obviously, she had to chat about it during the Los Angeles stop of Oprah’s 2020 Vision: Your Life in Focus tour. All you need to know about it was already in her simple caption: “Relaxed and recharged.”

“This was after the Super Bowl and I was exhausted, so I took some time to relax and recharge… it took me a couple weeks to recharge,” she explained during their March 1 chat at The Forum. “I felt like I had been hit by a truck after the Super Bowl.” Jennifer trained for months for the halftime show, which she shared with Shakira. She worked tirelessly on dance routines before hitting the stage in Miami on February 2, and clearly, her body was better than ever. In the epic selfie, which you can see below, the mom of two is wearing a barely-there bikini that puts her abs and toned body on display before hitting the pool.

Two weeks after the Super Bowl, she was still taking a much-needed break from her hectic work schedule. And it wasn’t just the halftime show that kept her busy in 2019. “I started working on Hustlers the February before — so a year ago,” Jennifer told Oprah. “And I went from Hustlers to the tour, to Hustlers coming out, to filming a movie that I just did called Marry Me, to the Super Bowl. It’s just non-stop. So I think I was just trying to get to the Super Bowl and finish. The next day I looked so crazy! I could not move from the bed. Like, my legs weren’t working; they were done!”

Jennifer also dished about her engagement to Alex Rodriguez, 44, in her interview, telling Oprah that they feel “no rush” to get married. “Your old thinking comes right back, all that hopeless romantic [stuff] that made me get married three times. He’s like, ‘Whatever you want to do, we can talk about it’. I said, ‘But if we’re going to be together for the rest of our lives, what is the rush?’.”