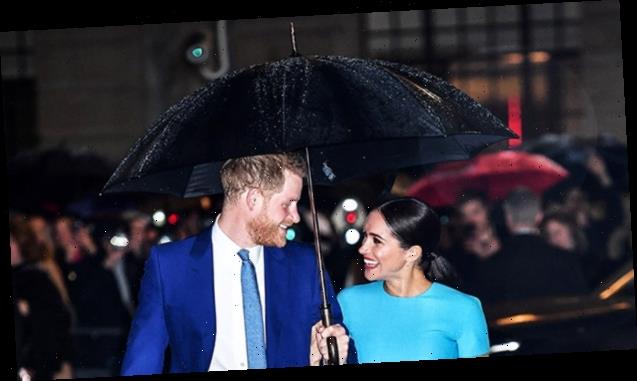 We’re back! Meghan Markle, 38, and Prince Harry, 35, made their first public appearance together on Thursday, March 5, since announcing their decision to step down as senior working members of the royal family. They arrived at the 4th Annual Endeavor Fund Awards in London where the married couple avoided the rain by ducking under a big umbrella before making their way inside. Meghan looked absolutely smashing in a bright blue midi dress by Victoria Beckham that fit her body to perfection. She added some major style points in her Manolo Blahnik stiletto pumps while keeping her accessories at a minimal for the big night ahead. She did, however, rock a petite clutch next to her handsome beau who wore a darker colored blue suit and dress shoes. They were spotted in a loving gaze with one another reminiscent of their legendary wedding that took place almost two years ago.

Don’t expect to see Meghan and Harry out at any royal appearances past this month. The date of their official transition into post-royal life is nearing (April 1, 2020), meaning that there’s only weeks to go before their lives go through another major change. The pair are, however, still scheduled to reunite with his brother Prince William, 37, and Duchess Kate Middleton, 38, on Monday, March 9, for Commonwealth Day. It will eventually lead to them completing their remaining round of royal duties on March 31. This all followed the Sussexes’ January 8 announcement that they would be taking a step away from their roles in the royal family.

The Duke and Duchess “have no regrets about leaving,” a source shared EXCLUSIVELY with HollywoodLife on February 21. Furthermore, the source said that Prince Harry and Meghan’s move “was absolutely the right choice for them. They‘re so relieved that it’s all out in the open now.”

The stress of the entire ordeal has clearly alleviated over time. “The process has been extremely stressful but the toughest part is over and it’s obvious a big weight has been lifted off their shoulders,” our insider continued. But while the most difficult part of their move is over, “they aren’t sitting around relaxing, they’re both full speed ahead.”