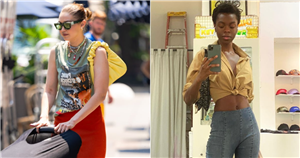 Model Nanga Awasum was just going about her day when supermodel Gigi Hadid was struck by her confidence on the street. Gigi quickly snapped a pic of her outfit and wrote on Instagram, “Shoutout to my NYC inspiration of the day : this queen. Was too 🤤 🤤 🤤 to get a pic of the front, but she was major.” Nanga was wearing a khaki-colored button-down knotted into a crop top with denim flares and a Dior bag. The ’70s-infused outfit looked pretty great, if we do say so ourselves.

Suffice it to say, Nanga was on her way to Zara to change when two women approached her at the store and let her know her look had hit home with Gigi. Suddenly, the ensemble became something Nanga would treasure forever, as she subsequently posted on Twitter about the moment: “It’s the way @GiGiHadid would have changed my entire life if I was only facing the right way.” Gigi responded, too: “You were facing the right way exactly where you were headed. Sunshine! Sending biiiiig love Nanga !”

The exchange brought a lot of attention to Nanga’s page and her style, and it shows what can happen when we take our noses out of our phones and appreciate the people right in front of us. POPSUGAR talked to Nanga (who had always been a Gigi fan) about the social media act of kindness, which might seem minor to some but holds more power than you know. “She is exactly the type of woman I want to look up to, and I’ll say it over and over again, I don’t have a lot of positive role models in this industry. I don’t only want to be remembered for being beautiful; I want to be remembered for the positive impact I left on others. Just as she left on me,” Nanga said.

Ahead, see how things unfolded when Gigi paid it forward, then find out how Nanga reciprocated in admiration by choosing her favorite street style outfit of Gigi’s!