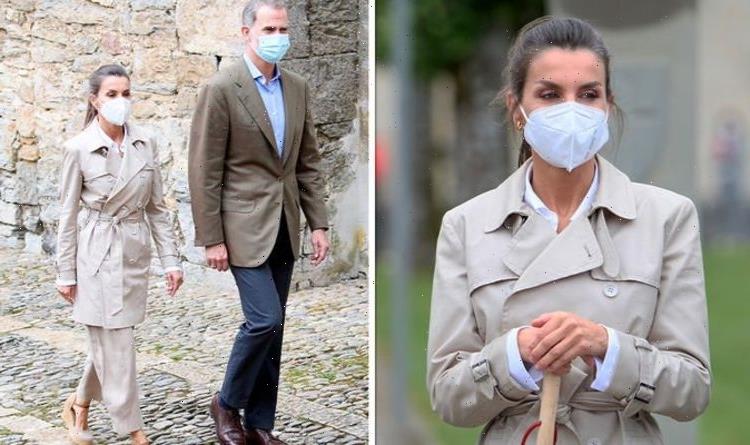 Kate Middleton and William arrive at Wimbledon for final

Queen Letizia and her husband King Felipe VI joined other walkers along Camino de Santiago, the most famous pilgrims’ route in Spain

The mother-of-two looked beautiful and very smart in a long trench coat.

She combined the beige jacket with matching linen trousers and a white shirt.

The elegant coat is from designer Hugo Boss, one of the queen’s favourites.

She finished her “pilgrim” look carrying a walking stick and a black umbrella.

On this occasion, the Queen opted for classic makeup with a dash of mascara.

She decided to keep her jewellery to a minimum, sporting a pair of gold hoop earrings.

For the occasion, the monarch chose to have her hair tied in a stylish ponytail.

Queen Letizia and King Felipe walked for one kilometre (less than one mile) to commemorate the Jacobean Year.

The couple sheltered under black umbrellas as they chatted with other walkers.

Although later in the day, Queen Letizia was seen wearing comfortable shoes, she started the walk wearing high heel espadrilles, something that shocked many.

Fans took to social media to comment on her outfit and although some thought she looked like a “chic pilgrim”, many criticised her choice of footwear.

“Since when this is a pilgrim’s look?” one user said.

What do you think? Join the debate in the comments section here

“Wow, and she walked one kilometre with heels… a bit extravagant,” said another one.

“Wearing a Hugo Boss trench for a walk, she definitely won’t go unnoticed,” commented a third one.

When she changed shoes, she opted for a pair of beige trainers by Panama Jack.

Letizia’s countryside look failure, which was “too chic” for many, can be due to the lack of official outdoor appearances.

Compared to other royals, like the Duchess of Cambridge, Queen Letizia and her husband are rarely seen in the countryside.

As a lover of the great outdoors, Kate Middleton always dresses appropriately for outdoor occasions.

She is not afraid to put on a pair of rain boots and a Barbour jacket and she still looks as glamourous as ever.