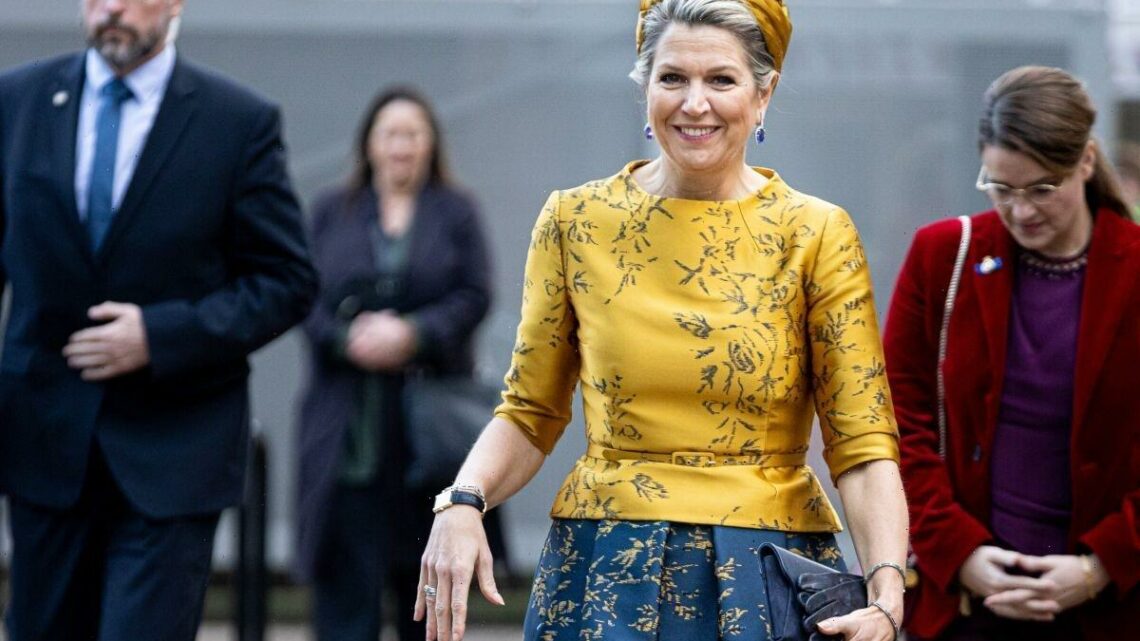 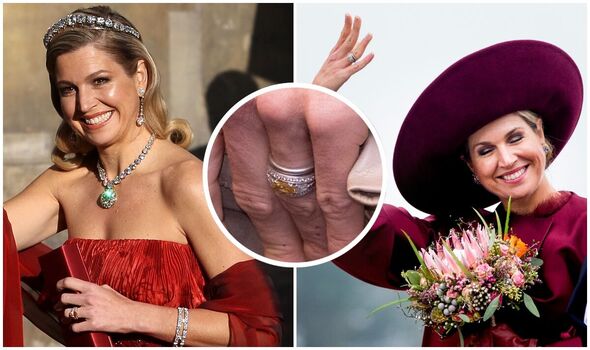 Máxima Zorreguieta Cerruti was just 27 years old when she met a young man who introduced himself simply as “Alexander”. After some difficulty, the couple eventually got engaged and then-Prince Willem-Alexander presented his bride-to-be with a beautiful orange diamond engagement ring.

The colour of the stone was chosen deliberately, and while the Queen still wears the piece today, which hand she chooses to wear it on when she steps out in public is very random.

In terms of the ring’s design, Willem-Alexander had turned to Steltman, a Dutch jewellery firm, to make it.

The centrepiece of the white gold ring is an unusual oval-cut orange diamond, which is flanked by a pair of emerald-cut white diamonds, and two rows of pave-set diamonds hug the central portion of the ring.

As for why an orange diamond was chosen, the choice of the colour was deliberate: it references the House of Orange-Nassau, which is the name of the Dutch royal dynasty.

The title bestowed on the heir to the Dutch throne is Prince (or Princess) of Orange, and Willem-Alexander was Prince of Orange at the time of their engagement and wedding.

The name of the royal house is a reference to a place (the town of Orange, which is in Avignon in the south of France), not the fruit or the colour, but the family understandably later adopted the colour orange as one of their symbols.

During their wedding, the couple exchanged wedding bands, and this ring sat behind Máxima’s engagement.

However, while many royals wear their engagement ring exclusively on one hand (usually the left), Queen Máxima has been photographed wearing her ring on both her left and right hands.

This is because of the blended traditions that Queen Máxima and King Willem-Alexander have brought to their family.

King Willem-Alexander is Protestant, while Queen Máxima was raised in the Catholic Church.

When Willem-Alexander told Máxima that he was a Prince, and the future King of The Netherlands, she thought he was joking.

But after initially hitting it off, they promised to meet a few weeks later in New York, where Máxima was working for a bank.

Máxima and Willem-Alexander, who was 32 when they met, kept their relationship quiet for several months, and in the September of the same year they met, they appeared in public together for the first time.

By 2001, the relationship was serious, and the couple decided they wanted to marry.

Máxima, who was born in Buenos Aires, already spoke several languages, so she began learning Dutch. But her family background caused issues when Willem-Alexander approached the government about a possible marriage.

Máxima’s father, Jorge Zorreguieta, had served as a cabinet minister to an Argentine dictator, Jorge Rafael Videla. Jorge’s connections to a regime that had committed atrocities against the Argentine people were unacceptable to the Dutch government, and some members of the Dutch press argued Prince Willem-Alexander should have to renounce his rights to the throne to marry Máxima as a result.

Willem-Alexander’s parents, Queen Beatrix and Prince Claus, however, gave their support to the prospective marriage. The Prince tried to defend Máxima and her family on television, earning him a rare public rebuke from the country’s Prime Minister, who “asked him to keep quiet” about the issue.

Public opinion sided with the young couple, and the government ultimately relented – with the caveat that, although she had not done anything wrong herself, Máxima would have to distance herself from her father, who would not be allowed to attend the royal wedding, which took place the following year in February.