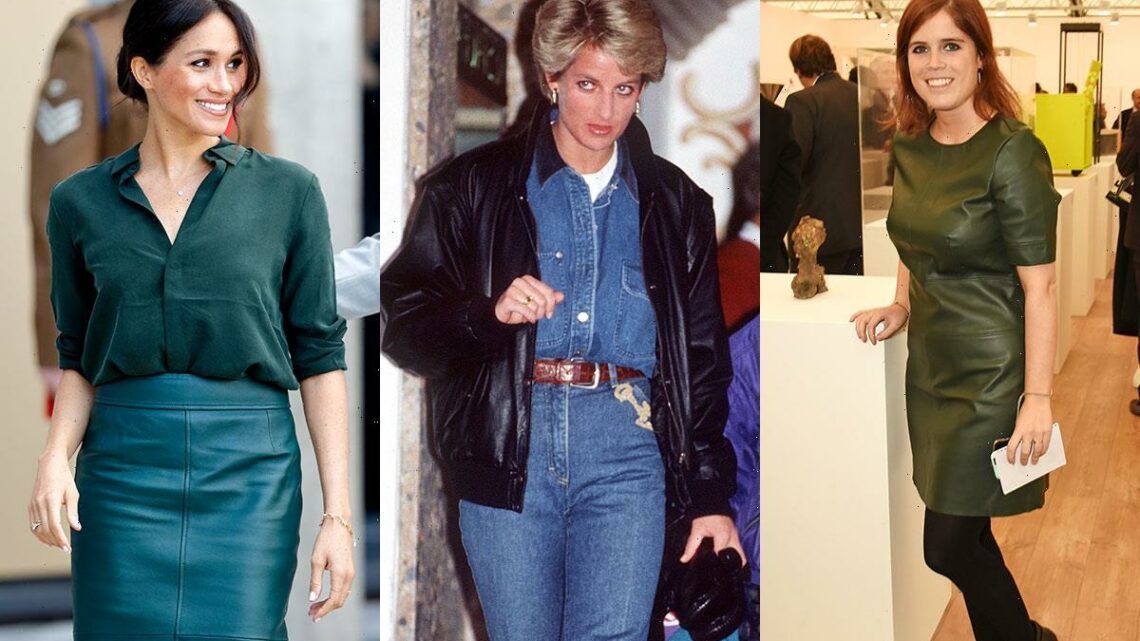 Who doesn't love a good leather jacket to add a bit of edge to your outfit? The majority of royals agree, with the likes of Duchesses Kate and Meghan and Princesses Beatrice and Eugenie all spotted out in chic leather outfits in their time.

In fact, the Duchess of Sussex rocked a gorgeous pair of leather trousers during a surprise appearance on America's Got Talent in September 2020 – watch the video above!

Whether it's a fun mini dress for a night out or pencil skirts for royal engagements, scroll down to take a look at how our favourite royal ladies rock their leather…

Meghan has long been a fan of leather garments and wore this ultra-chic green pencil skirt by BOSS for a visit to Sussex in October.

Speaking of her former acting days, Meghan was often seen wearing leather biker jackets to toughen up her outfits. When she first began dating Prince Harry, she chose a deep berry studded number for the 2017 Invictus Games Opening Ceremony.

MORE: Royals looking beautiful in blue: From Duchess Kate and Meghan to the Countess of Wessex

Back in 2016, she looked very striking in a pair of leather trousers for a Suits event in New York – and just look at that bold red lip!

It's now thought that Meghan chooses not to wear bright lip colours, as she doesn't feel comfortable in them.

The Duchess of Cambridge

Kate isn't often seen wearing leather outside of her shoes and handbags, but she does favour her Really Wild Nubuck Leather Gilet for outdoor engagements.

Plus, a young Kate used to love her leather jacket while she was still dating Prince William! Here she is pictured at the polo back in 2009.

Beatrice – who is known to be very modern with her style choices – is also a big fan of wearing leather.

She stepped out in a leather mini dress for a night at Soho House in 2016, teaming it with a quirky varsity jacket for extra edge.

She showed us how to rock a mini skirt in this fun number, too! Extra points for the pink Perspex clutch…

Sister Eugenie is clearly just as keen to break the royal mould when it comes to fashion – she wore this gorgeous leather wrap dress to a product launch back in 2016.

This olive green shift dress, worn to a preview of the Frieze Art Fair in 2015, is equally as chic, don't you think?

Eugenie also loves her leather leggings! She wore this bold outfit for a date night in London with husband Jack Brooksbank.

Ever the rebel, Princess Diana memorably stepped out for a night at the theatre in bold red leather trousers back in 1987, and was also fond of her voluminous bomber jacket. Hands up if you'd still wear these today!

In fact, in one of the sweetest archived shots of the People's Princess, she was seen being gifted two adorable children's leather jackets for the young Princes William and Harry by singer Lionel Richie.

For her daughter Princess Eugenie's wedding, Sarah Ferguson opted for a total of three fabulous outfits! But it was the third one she wore to the wedding reception that really caught our eye.

She swapped into a stormy blue leather jacket with chunky buttons which she layered over a pale blue dress by designer label Jad Ghandour.

If there is one colour that can perfectly transition us from autumn to winter and out the other side, it's maroon. Queen Maxima showed us how to style it by wearing the colour from head-to-toe in September 2019.

Elegant as ever, she wore a pair of leather culottes, with matching white-spotted, pussy-bow blouse from Zara and maroon heels. So chic!

How gorgeous did Princess Mary look in this navy pencil skirt? She wore it with matching heels and a printed blouse from Serbian fashion designer Roksanda Ilinčić as she attended the annual Christmas Label presentation in Copenhagen.

The Countess of Wessex

Sophie seems to love her leather jacket, which she's been spotted in on a number of occasions.

Here she was photographed at the Windsor Horse Show in May 2017, where she teamed it with a simple blouse, skirt and boots.

Perhaps unsurprisingly, Spain's ever-stylish Queen Letizia is also a fan of leather and has been spotted in a variety of trousers, jackets and dresses in the sleek fabric.

One of our favourite moments was in Madrid in February 2016, where she wore these perfectly-tailored cropped trousers to the opening of the ARCO art festival.

The mother-of-two showed off her sexy side by wearing a gorgeous maroon leather pencil skirt in South Korea in October 2019.

And who can forget her favourite black nappa leather leggings by Uterque?

In September 2019, she looked sophisticated in monochrome, layering a white Massimo Dutti textured weave gilet over the top.

This jacket and trouser combo is gorgeous, too – worn to a screening of the film Safety Last! in October 2018.

Princess Charlene also loves a leather trouser, wearing hers with an ultra-chic blazer and checked top to the 2017 Princess Grace Awards Gala Kick Off Event in October 2017.

Princess Anne's daughter loves dressing up and attended Storm Keating's 40th birthday bash wearing a fabulous blouse, which she tucked into a pair of gorgeous leather mini shorts. So chic!