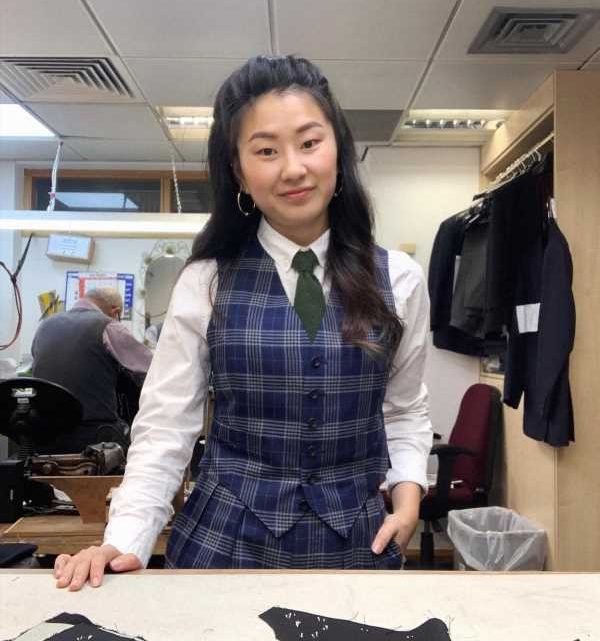 Savile Row Tailor Jihae An Is Breaking Boundaries in Her Field

The Korean and English maker, who is breaking boundaries in her field, is known for creating precise, bespoke wears.

Britain has more to offer than tea and crumpets—there’s also a Queen who hoards corgis within the gates of Buckingham Palace and a grandson who recently hinted in his tell-all interview with Oprah that there is, in fact, some truth to The Crown. But perhaps the most redeeming homegrown export found on the island across the Atlantic is the one appreciated by the dapper dandies worldwide. Savile Row is symbolic of British excellence and has been for almost 400 years. According to lore, the street in Mayfair, London known for its traditional bespoke tailoring is a central hub for boys becoming men and princes turning into kings—with the help of precise tailors and sewing masters. And, while the numerous cutters, tailors, and makers found on Savile Row continue to support the hundreds of years which built the country’s identity, there’s one young maker who’s at the forefront of evolving what being British and working on Savile Row looks like.

“I’ve been on The Row for years now, and I still get a fizzy feeling every time I walk down it to and from work,” 29-year-old Savile Row maker Jihae An tells W. An is currently in her fifth year working at one of the oldest and most renowned tailoring houses on Savile Row, Ede & Ravenscroft. “In history books, you see the pictures of all these tailors on Savile Row sitting around the table, doing the work. And, being here now, it makes me excited to continue its legacy.” But An is doing more than continuing its legacy. As a member of The Row’s vanguard, the young maker is inherently making history as one of the few and first women of Asian descent on Savile Row.

Naysayers may claim that’s not a big deal—and even An, a first-generation immigrant from South Korea, admits that she used to downplay her heritage. “I used to not want to be known as just ‘the Asian’ tailor.’ I wanted to be known for my skill,” she says. But when asked how many other Asian tailors there are on Savile Row, An says “I can probably count them on one hand.”

The rarity of Asian women on Savile Row inspired An to start posting her work on her Instagram account, which has amassed more than 13,000 followers. From photos of unbound pieces to videos of her actually working, An offers a visual treat to curious on-lookers from around the world. “I remember seeing an Asian Bratz Doll on television growing up. As the only Asian kid in East Yorkshire, seeing this kind of representation was everything,” she adds.

Cultural implications aside, there’s also no question when it comes to An’s skills. Her former professor at the University for The Creative Arts in England, Stuart McMillan, describes An as “first-class” and “a master of everything she did in the craft.” Founded in 1689, Ede & Ravenscroft is one of the oldest shops on Savile Row—and one of its most loyal clients is the British Royal family. There’s no denying the prestige in having Queen Elizabeth, the corgi hoarder herself, and her late husband, Prince Philip of Edinburgh, don royal garbs by An’s employers.

In her position, An says she “receives the dismembered pieces of the suit” and puts them together create the finished product. She’s known as the person who breathes life into the garments—she and other makers at other shops are the reason why so many people pay big bucks just for one suit. “It’s for the experience. They come for the fittings in the shops and a product that’s made by people like me who have gone through years of training,” An says. “I’m proud of showing the inside of the coat just as I am the outside, because that’s the way I was taught.”

In a world where fashion is fast and often unsustainably produced, made-to-measure practices on Savile Row offer a touch of history, harking back to a time when fashion was treated as a slow craft rather than an industrial machine. “Obviously it’s still a part of fashion. But it felt like I wasn’t choosing fashion in any way,” An says. “It has history and is reminiscent of how Dior and Chanel first began.” She owes her start in the craft to her first teacher, Julio Mompó who was trained at Maurice Sedwell and is the head tailor at Thom Sweeney. According to An, Mompó “took a chance” on An and taught her everything she knows now. “When I first donned a Savile Row-made suit, I felt like a power ranger. People treated me like an adult,” An says. “You can’t get that feeling anywhere else.”

“I’ve fought tooth and nail for this position,” An says. Her love for the craft eclipses archaic, discriminatory views against people of color—and her role on Savile Row, one of the utmost British trademarks, is a lighthouse constantly reminding people what being British is. “This is what Britishness looks like,” An Says. “That you have a love for this country, love for this democracy, and love for the many aspects of England. Passing people don’t get to suddenly be border police and ask ‘Where are you from?’”

In the wake of the Black Lives Matter movement last year sparked by the murder of George Floyd, An said her concern motivated her own racial awakening. Recently, she’s been working on a special project: combining her Korean and British identity through clothing. As a Savile Row tailor, her skill is in three-piece suits. As a Korean woman, her love is in the Hanbok. It’s in the works now, but An is working on creating an ensemble that merges the structure of the suit with the regal aspects of the Hanbok. “The purpose is to signify that I’m both British and Korean. There is no separating the two.”