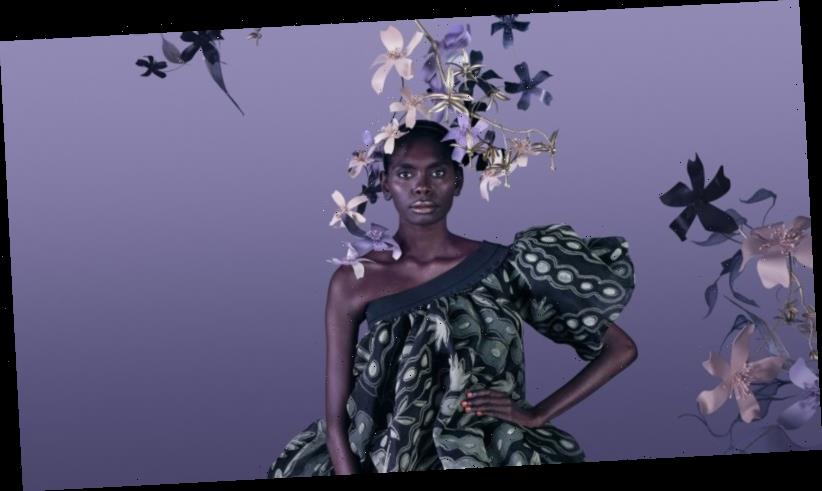 I had an epiphany at the Melbourne fashion festival’s final show on a muggy Sunday afternoon in March last year. I’d already covered 20-odd high-volt events in the previous two weeks and was hankering for some unglamourous, unspangled banality to reset my frock co-ordinates and return from Planet Fashion. Maybe a footy match later, or an arvo on the couch with Netflix. Just one show to go: the Global Indigenous Runway. 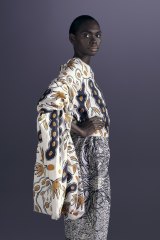 Most Virgin Australia Melbourne Fashion Festival (VAMFF) runways are staged in the gobsmackingly glamourous Royal Exhibition Building but this one, a bright blip on the festival’s sprawling independent and arts event calendar, was bumped in to the vast, gloomy Goldfields Theatre on South Wharf. (Its 2020 iteration is on this weekend in the same venue.) Hundreds of us shuffled into seats banked around a C-shaped floorwalk: mums, dads, aunties, kids, and mates of the wannabe designers, models and backstage crews.

Then all quiet. A lone young bloke; slick suit, sharp haircut, shiny tan shoes, strolled out of the shadows from backstage (‘‘Men’s tailoring,’’ I jotted with a ‘‘??’’) to the corpuscle-pumping huffs of a didgeridoo.

‘‘Walanbaa mari … walanbee yinarr …’’ (‘‘strong Aboriginal woman … strong Aboriginal man’’), singer/songwriter Mitch Tambo sang in a high piping voice and, as he did, peeled off symbolic layers; jacket chucked here, shirt tossed there until, down to belted trousers he plunged his fingers into a bark scoop of chalky paint, smeared jagged stripes across his bare chest and danced, stamping, leaping, chanting, half business-suited city buck, half (I found out later) Gamilaraay warrior, into my psyche.

Mesmerising. I could almost feel the metaphorical threads knitting click click together; 60,000 years of indigenous culture meshing into Australia’s multicultural mainstream and cresting rhetoric around reconciliation, treaty and national identity. And it didn’t surprise me that all this was crystalising at a frock show, either. Au contraire.

Fashion is handily situated on the showy frontlines of cultural change, quick to pluck out any conscience-pricking issue percolating in the Zeitgest. So far this millennia it’s thrust feminism, gender equality and fluidity, diversity and racism, body shaming and sustainable and ethical garment production onto its own catwalks, into frockblogs and magazines, through its social media communities and even into trends and collections.

Fashion’s made it uber-cool to be a ‘‘woke’’ mainstream consumer; aware and principled about all the important stuff, calling the shots on what’s right and fair with Insta-posts, TikToks and, most crucially, with cash, PayPal and credit cards. Consumers shape fashion’s future and, by ripple effect, fashion shapes popular and mainstream culture.

So it was inevitable Australian indigenous culture, simmering so long on fashion’s fringe, would push up to its frontline. ‘‘My culture lives and breathes within my spirit but I also walk in the contemporary world,’’ Tambo told me this week, a year after my epiphany. ‘‘It’s only right that both worlds come together in the space where I express myself, where I tell my story in the most authentic way possible.’’ 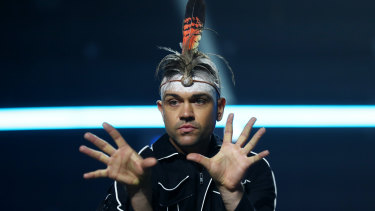 Mitch Tambo during a media call for Eurovision on the Gold Coast last month.Credit:Getty Images

A lot has happened to Tambo since last year. He’s wowed crowds as a Eurovision contender and with his Gamilaraay rendition of The Voice at Sydney’s Fire Fight Australia fundraising concert. But what marks his moment in the Zeitgeist most poignantly is the pride expressed in his message by non-indigenous Australians. ‘‘It’s been amazing,’’ Tambo says. ‘‘The outpouring of love and support from outside my community for my contemporary way of honoring and paying respect to my ancestors, it’s just amazing.’’ 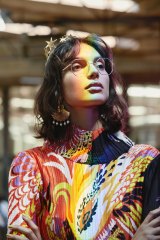 Charlee Fraser is the face of VAMFF’s 2020 campaign.

Tambo will perform a welcome to country for VAMFF’s Australian Fashion Summit next week. And if last year’s sprinkle of indigenous events across the festival’s independent and arts schedule was a breakthrough, this year’s is a tipping point, with indigenous model Charlee Fraser the face of a program heavily peppered with Aboriginal artists and designers.

‘‘Fashion’s waking up to what a lot of first nations people have always known about sustainability, upcycling, and not basing [fashion] on wasteful trends,’’ says Bendigo Art Gallery’s first nations curator, Shonae Hobson. ‘‘We have a close relationship with country and the land so everything we do is about looking after it. The rest of the world is slowly catching up to that.’’

Hobson is a Kaantju woman, appointed 18 months ago as the gallery’s first dedicated, permanent first nations curator. She is curating Piinpi: Contemporary Indigenous Fashion, a watershed exhibition by first nation designers and artists to launch at the gallery in July. 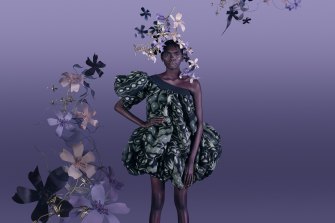 ‘‘Nothing like this has been done on this scale before,’’ Hobson says of the exhibition, the first kernel of the gallery’s ambitious plan for a permanent collection. ‘‘This is rich contemporary culture, indigenous storytelling reflective of today, being shared, being translated into beautifully crafted wearable art, silk scarves and fabrics, beautiful accessories.’’ 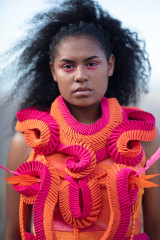 Hobson stresses the modernity of Piinpi’s exhibits: indigenous cultures don’t just stop evolving, she says, despite their ancient echoes. It makes for a delicate duality in many contemporary art and craft works by first nations designers. It’s a duality, Hobson believes, that is most intuitively understood by those who, like her, straddle indigenous contemporary and ancient cultures as well as the broader mores of modern Australia.

‘‘Indigenous people have been misrepresented for so long, but we’re taking control of our own narratives and perspectives now,’’ she says. ‘‘It’s important we do; we’ve got that deep cultural understanding of our own stories, our own art, our cultural obligations, ceremonies, traditional practices … we have natural depths of knowledge that just aren’t accessible to a non-indigenous curator.’’

Former CEO of the Australian Fashion Council David Giles-Kay realised a couple of years ago that the industry needed to lift its game when it came to indigenous representation.

‘‘Indigenous culture wasn’t really reflected in our industry as much as it should have been, yet every time we had a talk or an event, we were always recognising the traditional owners of the land,’’ he says. ‘‘I realised how uncomfortable I was saying it. I knew [the fashion industry] needed to do our part in the reconciliation process.’’

Giles-Kay now consults for the Darwin Aboriginal Art Fair, but two years ago, while still CEO of the fashion council, he tackled the anomaly by contacting Jen Layton, a woman renowned for forging links between indigenous artists and the wider fashion industry. After selling her share of The Ark Clothing Company, Layton established Earthed Foundation, a bridge into fashion for artists from Fitzroy Crossing and its Marninwarntikura Women’s Resource Centre. ‘‘[The artists] want to earn income to help keep their small communities going,’’ Layton says, ‘‘and we want to walk beside them and learn from them and work with them at their own pace. There’s never-ending talent at the top end of Australia, and potential to absolutely explode, but not a lot of access or support.’’

‘‘Communities tend to be hesitant and that’s understandable,’’ says Drummond, a Torres Strait islander with a long history in fashion, politics and indigenous rights and health before she started Jira in 2017. ‘‘Leaving [to model] can also be overwhelming so I meet their family, their community, not just them, and, it’s not just about modelling, it’s about life; everything from how to check into a flight, get a taxi … save your money. It’s as basic as that.’’

Hazel’s fashion classes have also become a roaring success. ‘‘[The women] would hang back in the beginning,’’ Layton recalls. ‘‘So shy, all the way across the other side of the room. But by year three, they’re sitting together with Lois, sewing, thigh-to-thigh, chit-chatting and laughing.’’

Hazel, an RMIT graduate and independent designer in Melbourne, shares her design, patternmaking and sewing skills in practical ways the artists can use to convert their print designs into luxury fashion pieces. ‘‘They sell out so quickly that we’re at a crossroads,’’ Layton says. Whether to scale up, perhaps to digitally print some fabric, demands thought around originality, sustainability, authenticity. ‘‘We have let them consider,’’ she says of the artists. ‘‘It will be up to them.’’ 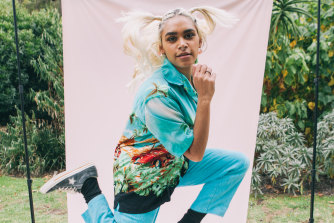 As it is for every indigenous artist at this swivel point in Australian fashion. Fledgling designer and DJ Sky Thomas, 25, baulks at the idea that her joyfully genderless streetwear label Sawft, launching at VAMFF with a crowd-funded runway and carpark party, might be considered more than usually desirable just because she is indigenous.

‘‘Yes, it’s an extremely important part of my life, obviously been a factor in shaping who I am, but it’s not the key of who I am,’’ says the Darwin-born, Melbourne-raised designer. ‘‘I don’t want people to know me as just: this is Sky, she’s indigenous.’’

Thomas’ offbeat and oversized baggy tees, dungarees and jerseys were more inspired by daggy telly shows and movies: Welcome Back Kotter, Pretty in Pink, Boyz n the Hood, than any cliched iconography.

‘‘I didn’t want to be in an indigenous runway,’’ Thomas says. ‘‘I want to show with everything in my life, the complexity and the diversity and everything that people – and indigenous people – can be.’’

Deakin Edge, Federation Square, 9am: Mitch Tambo will perform a welcome to country on behalf of indigenous clans to open the Australian Fashion Summit.