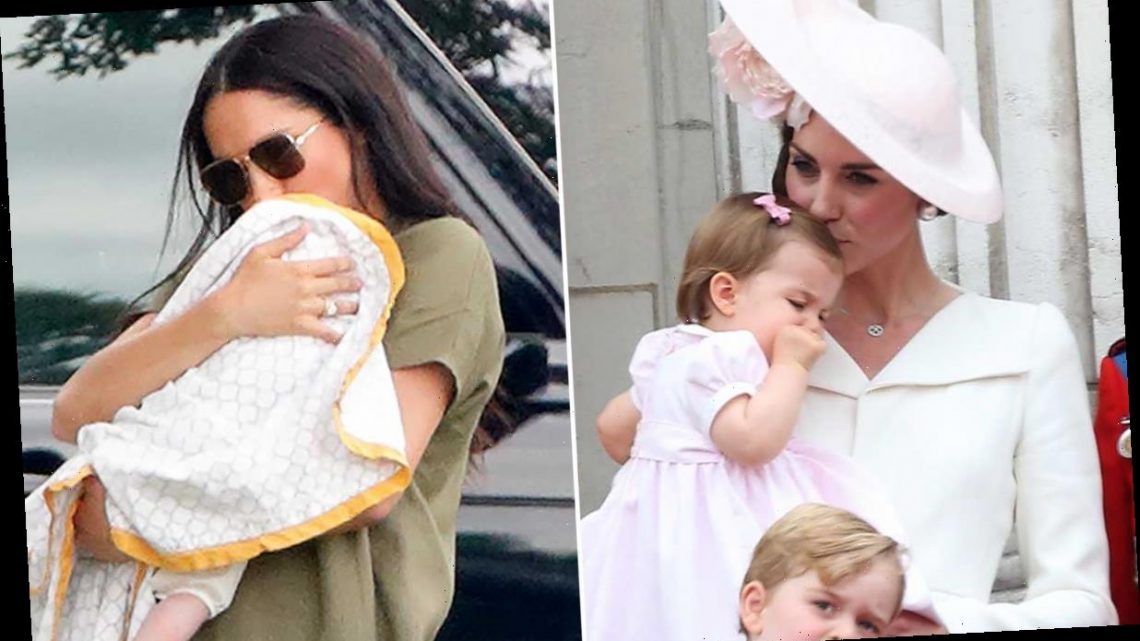 With Mother’s Day nearly upon us, our favourite royal mums will no doubt be treated to a special day with their loved ones on Sunday.

There have been several cute bonding moments these royals have shared with their children over the years – and we hope to see many more!

Here at HELLO!, we take a look back at some of the times the likes of the Duchess of Cambridge, the Duchess of Sussex and Zara Tindall have been picture kissing their little ones.

There’s no denying that Kate has a strong bond with all three of her children. And in 2016, the royal mum melted hearts when she was spotted kissing Princess Charlotte‘s head during their appearance on Buckingham Palace’s balcony – how cute!

WATCH: Adorable moment Meghan kisses Archie as they play on the beach in Santa Barbara

Just two months after welcoming little Archie into the world, the Duchess of Sussex made a surprise appearance with her newborn baby at one of Prince Harry’s polo matches back in July 2019. Royal fans were delighted after seeing Meghan planting a tender kiss on her baby’s head as she carried him from the car.

Zara, the Queen’s eldest granddaughter, gave her youngest daughter Lena a peck on the cheek during the 2019 Festival of British Eventing at Gatcombe Park. Zara and husband Mike, who are also parents to eldest daughter Mia, are expecting their third child together in 2021.

It was clearly a family affair! At that same event, Zara’s sister-in-law Autumn was also pictured kissing her youngest daughter Isla’s cheek.

GALLERY: Royals who have changed their engagement rings from Meghan to Princess Diana

Back in 1990, Sarah was seen softly kissing her then baby daughter Princess Eugenie following her christening at Sandringham Church. Eugenie and husband Jack Brooksbank became first-time parents with the arrival of baby August in February 2021.

Although she often greets both her children with a kiss, Princess Anne is also a doting grandmother! The Princess Royal gave her granddaughter Mia Tindall a peck on the cheek before they watched Zara Tindall play in a Jockeys vs Olympians charity polo match at the Beaufort Polo Club in 2016.

Shortly after becoming a mother to Princess Estelle, the Swedish royal was clearly enamoured. The now mum-of-two gently kissed her foot as her husband Prince Daniel held their baby in his arms during her 35th birthday celebrations in 2012.

GALLERY: The most beautiful royal weddings of all time

Crown Prince Frederik’s wife was spotted kissing her then seven-month-old daughter Princess Josephine as the Danish royal family boarded the royal yacht in 2011. Josephine’s twin brother Prince Vincent was also pictured in his dad’s arms during the sweet family moment.

Princess Charlene of Monaco kissed her son Prince Jacques on the lips during the Riviera Water Bike Challenge in 2018.

GALLERY: 7 royal couples who gave up their titles for love

The wife of Crown Prince Haakon of Norway tenderly embraced her daughter Princess Ingrid Alexandra during an appearance at their National Day celebrations in Oslo.

How The Grammys Really Feels That Beyonce Isn’t Performing