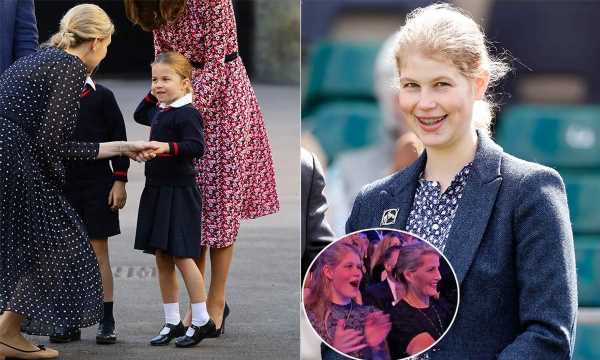 11 times royal parents cheekily bent the rules for their children

The royal family are an example of model citizens always on their best behaviour and knowing exactly what to do and what to say when. However on occasion, the royals bend the rules.

Over the years, they have gone against protocol or the expected norm for their children, but they usually have a very good reason. Let’s take a look at all the times these royal parents have let their brood do things other children simply wouldn’t be allowed to…

The Duke and Duchess of Cambridge’s eldest child, Prince George, got the opportunity of a lifetime when he attended the Euro 2020 final between England and Italy on Sunday 11 July.

The game kicked off at 8pm on the night and ended up going into extra-time and then a penalty shootout, meaning it was quite a late night for the young Prince!

Ordinarily, it would have been a school night but George and Charlotte were luckily already on their summer holidays by that point.

Sadly, England lost to Italy on penalties, and William was spotted consoling his son.

During an interview with BBC Breakfast in April 2020, the Duke and Duchess of Cambridge let us all into a little secret that they had been keeping from their own children. Like thousands of other pupils across the UK, Prince George and Princess Charlotte were homeschooled during the coronavirus lockdown but their parents admitted they hadn’t told their eldest kids about the Easter holidays and had kept up their lessons. Kate said: “Don’t tell the children, we’ve actually kept it going through the holidays. I feel very mean.”

Prince Edward and the Countess of Wessex’s daughter Lady Louise Wessex is best known for her love of horses, but she clearly also loves dancing. So much so, that the Queen’s granddaughter and her mother were spotted in the audience of Strictly in November 2018. The trip was a special treat in honour of Louise’s 15th birthday and both she and Sophie were photographed clapping, laughing and having the time of their lives.

Presenter Tess Daly said at the time: “They enjoyed all the action from the front row and they had a great night. It was great to welcome them.”

But was it against the rules? Strictly contestant James Cracknell previously revealed on This Morning that he’s looking forward to his son turning 16 so that he can watch his dad on the dancefloor, suggesting that children under that age aren’t usually allowed. (We won’t tell if you don’t.)

MORE: When royals break down in tears from Kate Middleton to Princess Charlotte

The Duke of Cambridge dropped George off for his first day at school in September 2017, with Kate unable to attend as she suffered from severe morning sickness. The four-year-old was personally greeted in the playground by the head of the lower school, Helen Haslam, who even shook the young royal’s hand. At the time, Ben Thomas explained: “We are going to try and make this a really happy, safe and secure place.”

It can only be assumed that the personal greeting and extra attention was to ensure that his classmates were not subject to the high media coverage and press frenzy that George was exposed to as he walked through the playground.

And two years later in 2019, Princess Charlotte was given the same special treatment as she arrived at Thomas's Battersea with her parents. This time, Kate was able to do the school run. The royals were again greeted by the head of lower school, Helen Haslam.

READ MORE: 10 times the Queen wasn't her usual happy self

Princess Charlotte and Prince Louis at the Chelsea Flower Show 2019

The Duchess of Cambridge worked alongside architects Andrée Davies and Adam White for months designing a garden for the Chelsea Flower Show 2019, and the royal couldn't wait to show her three children the completed design! The doting mother invited her husband and three children to admire her hard work, with Prince William, George, Charlotte and Louis attending the day before the show opened to public.

However, for this special visit it seems some rules had to be bent, as RHS clearly state on their website that: "We regret that we cannot allow under 5s, prams, pushchairs or babes in arms at Chelsea". Luckily, mum Kate was on hand to get special permission and the royal children happily attended and clearly enjoyed their time there.

MORE: 14 fabulous photos of the Queen and her family enjoying themselves at royal garden parties

Princess Eugenie married Jack Brooksbank on Friday 12 October 2018 in a beautiful ceremony that took place in St George's Chapel at Windsor Castle. The Duke and Duchess of Cambridge proudly watched their eldest children, George and Charlotte, fulfil the role of pageboy and bridesmaid on the special day. In order to attend, William and Kate made the decision to take George out of school during his Autumn term and Charlotte out of nursery. One day never hurt anyone, right?

Prince William and Kate broke the rules when they flew to Australia and New Zealand in April 2014, with Prince George, who was just nine months old at the time. It is thought that heirs should not take the same flights in order to protect royal lineage, but it was reported at the time that permission was sought from the Queen before the trip. Since then, the father and son have flown together to Canada, Poland and Germany.

Prince George in the cockpit

In July 2016, Prince George attended the Royal International Air Tattoo alongside Prince William and Kate for his first royal engagement in the UK. At the age of two, the Prince appeared eager to take a closer look at the RAF Aerobatic Team's Red Arrow Hawks, persuading his parents to allow him to climb up into the cockpit and sit in the plane. It is extremely rare that a child would be given this opportunity, indicating the influence of George's royal status.

In 1989, the Queen gave permission for her granddaughter Zara Phillips, who was 8 years old at the time, to attend Royal Ascot with her mother Princess Anne. This decision went against Royal Ascot's rules, with the event holding a strict age limit of 18 at the time. The eldest granddaughter of Queen Elizabeth II was the only child to have been allowed into Royal Ascot that year. Since then, the age restrictions have changed, with children under the age of 18 allowed to attend Royal Ascot when accompanied by a paying adult. It seems that the event had a positive impact on the mother-of-two as she went on to win a silver medal for the equestrian event team at the London Olympic games in 2012.

Crown Princess Victoria of Sweden and her husband Prince Daniel raised eyebrows when they brought their seven-year-old daughter Estelle to a Metallica concert in July 2019. The standard age limit for the concert is 13 years old, but an exception was made for the young princess, who reportedly watched the heavy metal band from a box with controlled sound.

MORE: Find out what Kate Middleton always travels with in her car