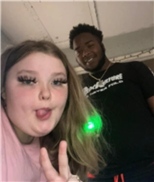 In fact, her family’s fame has made it difficult to make real friends.

Apparently, finding herself a boyfriend has been less challenging.

But Alana’s boyfriend isn’t one of her current classmates … because he is a 20-year-old college student.

During Alana Thompson’s most recent interview for Teen Vogue, she did mention having a boyfriend.

At the time, however, she did not disclose many details.

The Sun, however, has learned that Alana is dating Dralin Carswell.

The two have reportedly been dating for about six months.

Notably, Alana turned 16 years old on August 28, which was this past weekend.

He was attending a Nashville technical school before the COVID-19 pandemic threw a wrench into those plans.

He is currently living in Georgia, however, near where Alana and her sister, Lauryn, live.

According to the inside source, “Dralin and Alana are attached at the hip.”

“And,” the insider continued, the two “hang out all the time.”

Alana lives with Lauryn, who is 21, and has taken over in the role of parent since June’s downward spiral a couple of years ago.

“He was quiet at first, but he’s like one of the family now,” the source characterized.

According to the insider: “He’s just as fun and crazy as the rest of them.”

Dralin is a huge fan of cars, and includes Alana in that passion.

“He has a Camaro, that’s like his baby, and he lets her drive it sometimes,” the source revealed.

As for Alana, the insider added: “Right now she is saving up for her own car though — she wants a Jeep.”

Alana and Dralin are sort of public, actually.

Back in March, Dralin changed his Facebook status (in 2021?) to “In a Relationship.”

That same day, Alana posted a photo of the two of them together on her private account.

Where things became more obvious was in the comments beneath the photo.

Dralin posted a heart emoji under the pic of the two of them together.

He also referred to Alana as his “bae.”

Alana’s family members are friends with Dralin on social media … with one exception.

Mama June Shannon, who has only recently gotten back in touch with her daughters, is not linked to him on Facebook.

Whether this signals that she doesn’t know about him, doesn’t approve, or just isn’t overly invested in keeping her Facebook contacts up-to-date … your guess is as good as ours.

We mentioned that Alana is 16 but only turned that age this weekend.

We also mentioned that Dralin is a 20-year-old adult.

The obvious question that follows is: is this legal?

Like in many (arguably most) countries, Georgia permits 16-year-olds to consent to sex.

Obviously, it looks like Alana and Dralin began dating when she was 15.

That said, dating is not always synonymous with sex. It is possible to do one without the other — especially in high school.

We have to note that Alana comes from a troubled family background.

Mama June, who became a grandmother at just 33 years old, was already a mother to Anna when she was Alana’s age.

Lauryn became a parent when she was 17 — still a teenager and still a minor.

With that grim context in mind, we have to understand that the Shannon family views age milestones very different than most of our society.

That’s not an excuse — just as the knowledge that Alana’s relationship is (now) legal is not the same as determining if it’s a healthy relationship for Alana.

We don’t have all of the answers. But we can definitely say that it’s a little weird for a high schooler to date a college student who was never her classmate, right?