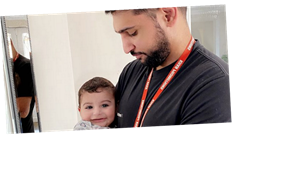 Amir Khan’s son is turning one, and the professional boxer intends to give him a truly knockout present.

The former I’m A Celebrity…Get Me Out Of Here! star has shared plans to give his little son Muhammad Zaviyar a Rolex watch later this month, despite the fact he is a few years away from even being able to tell the time.

The 34 year old took to Instagram to showcase the purchase to his 1.3 million followers and it is a Rolex Cosmograph Daytona. These typically sell for around £29,600 which is far more than most parents would ever dream of spending on an adult, let alone a young child.

Taking to his Instagram Stories, the star filmed the watch in its showcase, and captioned the video, writing: "Got my little boy his first birthday present. "His watch collection needs to [be] on [point]."

Last year in an exclusive interview with OK!, Amir said he "would never allow" his son to become a boxer.

The 34 year old revealed he would forbid his son from stepping into the ring, as he has “taken the punches” for his kids. Amir told us: “As a father, I like to be there for all my kids. I’m going to be very supportive and whatever they want to do I’ll be on their side."

He added: “I’ve been asked by a lot of people would you ever let him go in the boxing ring and fight.

"Look, I’ve done that for my kids, I’ve taken the punches for them and I would never like to see them punched in the face to be honest with you.

“But, if he wants to box – if Zaviyar says: ‘Look Daddy, I want to go to the boxing gym,’ I cannot stop him I will let him go there and let him pick what he wants to do himself.

“It’s a very tough sport to be in but like I said as a father I like to be there for all my kids. I’m going to be very supportive and whatever they want to do I’ll be on their side.”

However Zaviyar's birthday this is not the first time Amir and his wife Faryal Makhdoom have pushed the boat out for one of their child’s birthdays.

Last may their daughter Lamaisah turned six and was gifted with presents from Hermes as well as LOL! Surprise dolls and a matching themed cake by her parents.