Home » Celebrities » Angela Deem Melts Down at Critics: Go to Hell Idiots! Let My Name Taste Like S–t in Your Mouth! 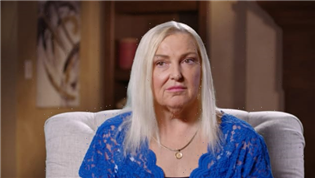 Angela Deem Melts Down at Critics: Go to Hell Idiots! Let My Name Taste Like S–t in Your Mouth!

Very few 90 Day Fiance stars make as big of a splash as the (fortunately) one and only Angela Deem.

She is loud, she has zero conflict-resolution skills, and she has no filter whatsoever. She was born for reality TV.

Angela is also toxic, bombarding her husband with verbal and emotional abuse.

Fans are tired of the horror show and want to see it stop. Angela … is not handling it well.

This is great news for Angela, whose behavior would only make sense if she were a rabid coyote.

Unfortunately, it is terrible news for Michael Ilesanmi.

It’s true that many fans suspect that, in the beginning, Michael was just trying to scam Angela.

Many conclude that he has since, perhaps with some help from Stockholme Syndrome, fallen for his wife.

But his motives are kind of moot. No one deserves to be married to an abuser.

Angela has been screaming at Michael for years.

It’s not a secret. It’s not an accusation.

We have all watched and heard it on our screens.

Even last weekend’s episode showed Angela once again back to her old tricks.

Of course, she told Michael that she was divorcing him — but grimly, we all know that the breakup didn’t stick.

Yelling is toxic enough on its own. But the content of Angela’s screams makes it worse.

First, there is what she says — screaming cruel obscenities.

Good, decent people who love their partners don’t yell at them to “shut up.”

Angela does. She says whatever she wants, at whatever volume she wants.

The second major issue is the motive behind her yelling.

We don’t just mean that it’s prompted by her mood or by imagined slights by Michael.

Angela’s vicious verbal abuse is designed to cow Michael into going along with whatever she wants.

That doesn’t necessarily mean that Angela is consciously, actively conspiring to break Michael’s mind and spirit.

In many ways, she comes across to fans like a raging chimpanzee that then calmly eats some pudding after ripping off its human’s face.

In this case, the chimpanzee also smokes in cars, in houses, and wherever else.

Does she even think to care about other people?

A lot of reality stars are carefully constructed images for branding, for laughs, for their careers.

Angela seems to be the genuine article. Which makes the nightmares that we see on screen so much worse.

That doesn’t stop some from accusing Angela of faking all of her fights and drama.

After all, this is the woman who went on Maury, twice, to accuse the same daughter of lying about her baby daddy.

That seems like the behavior of someone willing to be messy and obnoxious for fame.

Her daughter Scottie Deem wasn’t lying about that.

But Scottie was convicted for the sexual abuse of children.

Obviously, we don’t see all or even most of Angela’s life.

Many times, reality stars who seem to cry or complain every day only look that way because of editing.

Is that’s what’s happening with Angela?

Well, yes and no.

On the one hand, she is certainly being edited, not just for time but for content.

That way, we see her at her worst.

But no, at the end of the day, the things that Angela says and does on screen

It doesn’t matter if there are good moments edited out, or if she obviously pulls some stunts for the camera.

The verbal and emotional abuse is always, always wrong. There’s no wiggling out of that.

Very understandably, fans are fed up with Angela, and they’re not content to fast-forward through her anymore.

A petition has been started to get Angela removed from the show, because abusers don’t belong on TV.

TLC needs this outcry and pressure from fans — they’ll only take action if Angela hurts their bottom line.

Angela is handling this with her usual sense of grace and understanding.

That is to say that she is pitching an absolute fit like an ill-behaved badger.

This time, her verbal abuse isn’t aimed at her husband — but at random critics on social media.

As memes and bloggers openly wondered “who Angela will bully at this year’s Tell All,” the ill-tempered grandmother fired back.

“You if you don’t stop with the bulling bs,” she replied.

Many fans perceived that as being a threat. The tone certainly seemed hostile.

Angela told her critics: “Do go to he’ll idiot let my name taste like s-t in your mouth.”

JOHN HUMPHRYS: I admit I lived to work. I wish I'd just worked to live
Recent Posts