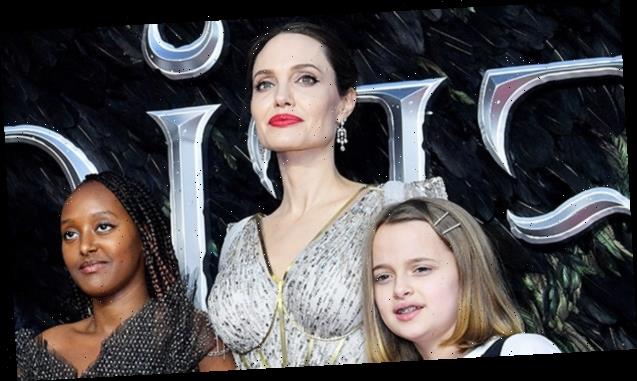 Angelina Jolie is continuing to be the most fun mom, taking daughters Zahara and Vivienne to see Cirque du Soleil’s touring show ‘Volta’ in Los Angeles.

While ex Brad Pitt, 56, has had the spotlight with his successful run through 2020’s awards season, Angelina Jolie, 44, has been under the radar so far this year. Until now. She posed with the cast of Cirque du Soleil’s traveling acrobatic show Volta, along with daughters Zahara, 15, and Vivienne, 11. Cast member Paola Fraschini shared an Instagram pic of the stunning actress surrounded by smiling cast members still in costume when Angie attended a recent “Under the Big Top” show at Dodger’s Stadium. She captioned the photo, “Ok.. I’ve never thought I could meet Angelina Jolie! She came to see the show…What a beautiful soul.”

Angelina looked stunning as always, with a slight smile and minimal makeup. She donned a black lingerie style slip dress with a black wrap over it. She wore her brunette locks down and flowing. Zahara could be seen a black shirt while Vivi was dressed more casual, in a white hoodie sweatshirt and patterned leggings.

Angelina has kept a low profile in 2020, as ex Brad tore through awards season winning every Best Supporting Actor prize for his role in Once Upon A Time In Hollywood and giving hilarious speeches along the way. He made fun of his two failed marriages when picking up his trophy at the SAG Awards, saying “Let’s be honest. It was a difficult part. A guy who gets high, takes his shirt off and doesn’t get on with his wife. It was a big stretch. Big.” It got tons of laughs and even a slight smile and applause from first wife Jennifer Aniston, 51, who was in the audience.

While he was unable to attend the BAFTAs due to a family emergency, his co-star Margot Robbie gave Brad’s prewritten speech on his behalf. She began, “Hey, Britain. Heard you just became single. Welcome to the club. Wishing you the best with the divorce settlement,” a joke referencing Brexit, as well as his own prolonged divorce war with Angie. At the Oscars, Brad finally gave his six kids with Angelina a shout-out, ending his speech by saying “This is for my kids who color everything I do. I adore you.”