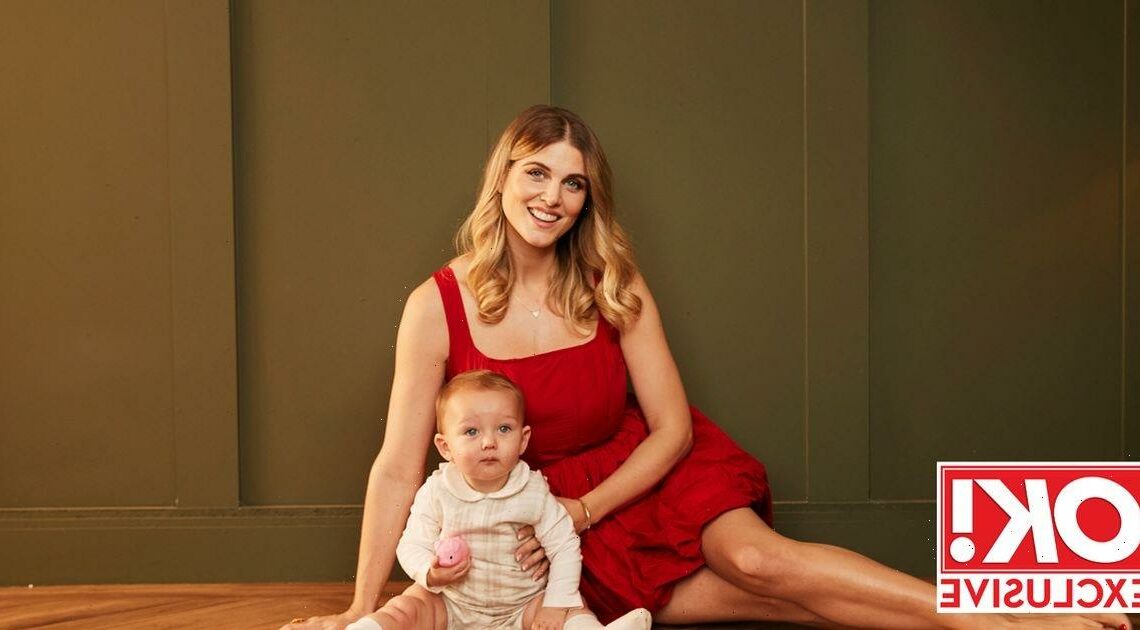 We’ve always loved Ashley James for keeping it real. From her unfiltered snaps to her breastfeeding selfies, the 34-year-old never shies away from sharing the realities of motherhood.

And after welcoming son Alfie 10 months ago with her boyfriend Tom Andrews, the DJ and presenter is keen to make other mums feel confident and empowered throughout their pregnancy and postpartum journeys.

So Ashley’s latest project couldn’t be more perfect, as the star has once again teamed up with Tu Clothing to curate her second edit of baby, maternity and womenswear, with the collection aiming to be practical and stylish.

Ashley is the first to admit that clothes she can feel confident in and a supportive online community have been hugely helpful when she’s had moments where she’s been struggling. “When you’re a mum you give so much of yourself to other people, so to be able to put on nice clothing that helps you keep your sense of identity is so important,” she says.

Here, Ashley opens up about the value of date nights, her worries when she and Alfie caught Covid-19, and backing her good friend AJ Odudu on Strictly Come Dancing…

You’ve been busy recently, Ashley. Have you enjoyed getting stuck back into work?

Yes! I had a really big gig in the summer at Boardmasters Festival and I’ve DJed at a few clubs.

It felt so nice to get back to it. I feel like my journey into motherhood is so intertwined with the pandemic and it’s hard to separate the two, as I found out I was pregnant in April 2020.

I had to give up DJing and going into Good Morning Britain [as an entertainment reporter] as it all went onto Zoom.

While there were amazing pros to that with being pregnant and tired, it was very emotional. Going back to those things felt like getting a bit of my old self back.

Are there any reality shows you would consider doing?

Never say never. I’m so busy with what I’m doing and with Alf, but I love watching those shows.

If the right show came up and it was the right time I’d consider it, but I probably wouldn’t do Strictly Come Dancing as I’m literally the world’s worst dancer!

My friend AJ [Odudu] is on it and I’m very happy to watch her smash it and save all my bad moves for the DJ decks.

You recently enjoyed your first date night with your partner Tom since welcoming Alfie. What was that like?

Tom’s parents came to babysit and his dad drove us so we literally felt like teenagers.

It was really nice, though. There was a stage not that long ago where I felt like I was never going to get those things back, especially with breastfeeding.

I felt so resentful and as much as I love Alf, there were times I felt trapped and like a prisoner. I was like, “Am I ever going to be able to leave him again?”

And then you feel guilty about saying it, but here I am a few months later and now I get a lot more time to myself and you realise it’s possible.

Hopefully there are more date nights to come – it’s important to schedule in that time for each other.

What helped when you felt trapped?

Definitely speaking to people online and in real life so you know you’re not alone. It’s so important. That phase goes very quickly.

We’re lucky Tom’s parents live close and they’re brilliant at helping out, and also my family when they’re nearby. There was a time when Alf was waking up every half an hour, so knowing there’s people there to step in really helps.

It’s a weird thing as a mum, people don’t like you to be picture perfect on social media but then there’s also this idea you shouldn’t be negative.

It’s like having a job with no days off and you don’t quite know what the job spec is until you’re in it and then it’s too late [laughs]! I don’t think I would have got through the last 18 months without support from people online.

Has motherhood become easier with time?

Different stages have been equally amazing and challenging. I loved the newborn stage and I thought it was the best thing, but I found it really difficult around four to seven months.

That’s when being a new mum and having a newborn wears off and people forget to check in. In the newborn stage you can get away with not showering and watching a boxset with your boobs out being milked.

You get to a point where you’re like, “Oh my God, I should shower now,” but Alf is awake and he wants to play so you can’t do anything. I also wanted to put time into work, dates and to see friends but I was still figuring out the juggle of how to make it work.

You’ve previously said there’s too much pressure on new mums to snap back into shape. Is that something you’ve personally experienced?

I wouldn’t say from anyone in particular, but it does upset me that it seems to be the narrative around postnatal bodies. I had Covid-19 around a month ago and I lost weight as I was so ill. A

lf was also ill and he ended up in hospital so that was obviously stressful and I wasn’t sleeping. I was continuing to breastfeed while being ill which was a challenge, and people celebrated my weight loss as if it was an achievement.

Sexiness and beauty is not one shape or size and it’s not about being the smallest version of yourself so you can be celebrated.

It must have been so worrying when Alfie was in hospital…

It’s scary when you go through something like that with a child. If I could’ve made my baby feel better and take his symptoms I would have.

Have you had any long-lasting effects from Covid-19?

Thankfully no. I was really worried as I lost my taste and smell, which is how I found out I had it. I was so worried as I’m a really big foodie, but I feel lucky that we’ve all made good recoveries.

It was definitely worrying, especially to feel so helpless when Alf was so ill and not be able to make him better.

You’re working with Tu Clothing on your second edit of baby, maternity and womenswear. Tell us about that…

I’m so excited. I feel happy that the first edit was well received. Having gone through pregnancy and getting to grips with postpartum and breastfeeding, I understand how overwhelming it can be to dress for yourself when your body is going through so much change.

And how much of that is linked with your confidence. We want to provide versatile items that don’t compromise on style.

My body is a different size and shape to what it was before and I did struggle with my boobs being five sizes bigger! I’m getting used to my body again and trying to figure out who I am when you lose bits of yourself.

You’re also supporting Tu’s 9 Months In, 9 Months Out campaign. Why does that resonate with you?

I think because your body goes through so many changes. And typically you only really tend to see the nine-month pregnancy and then it almost feels like you’re forgotten about once the baby comes, in terms of fashion and what you wear.

And what can we expect from your new edit?

There will be lots of practical pieces for winter that are handpicked by me. There’s a good balance between practical and fashionable and things that will make you feel good, as well as portable pieces.

There will be a diverse range of maternity, postpartum and some breastfeeding-friendly pieces, and cosy bits for babies as well, like sleep suits. Tu Clothing wants to be there for mums not just when they have a bump but beyond, so it’s nice to work with a brand that remembers postpartum mums.

I’m really proud to be a part of it again.

Tu Clothing baby, womenswear and maternity is all available to purchase online at Tu.co.uk and in selected Sainsbury’s stores. Ashley James’ A/W Edit is available to shop now

For more celebrity updates, sign up to our daily OK! newsletter.