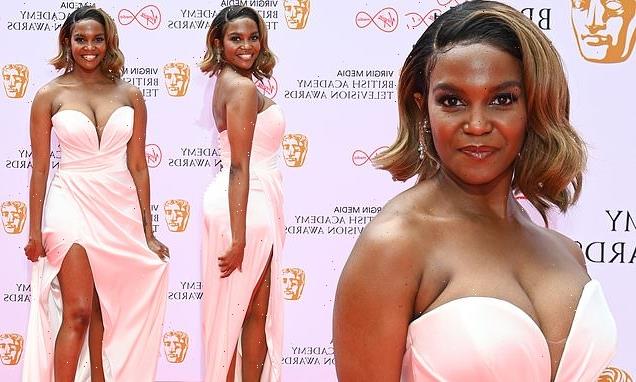 The BAFTA TV Awards 2021 will prove to one for the history books, as stars who are unable to attend will be beamed onto the red carpet in hologram form.

But Billie Piper, Jodie Comer, Michael Coel, and Oti Mabuse were among the select celebrities to make it onto the red carpet in person on Sunday, when they arrived at west London’s TV Centre in truly head-turning style.

Pop star-turned-actress Billie, 38, wowed she arrived on the red carpet in a black tuxedo dress, which was given a dramatic touch with a single puffy pink sleeve, which descended into a matching bow and train.

With one half of her dress covered in sequins, the star – who has been nominated for her turn in I Hate Suzie – toted a clutch bag, while she opted to accessorise with a glittering statement necklace.

While her ensemble was simple, the Killing Eve star added bold jewellery, including an open choker and colourful earrings as she posed up a storm for photographers gathered on the red carpet.

Strictly Come Dancing star Oti, 30, looked sensational as she stepped out in a deeply plunging cream gown, which boasted a daring thigh-high slit. 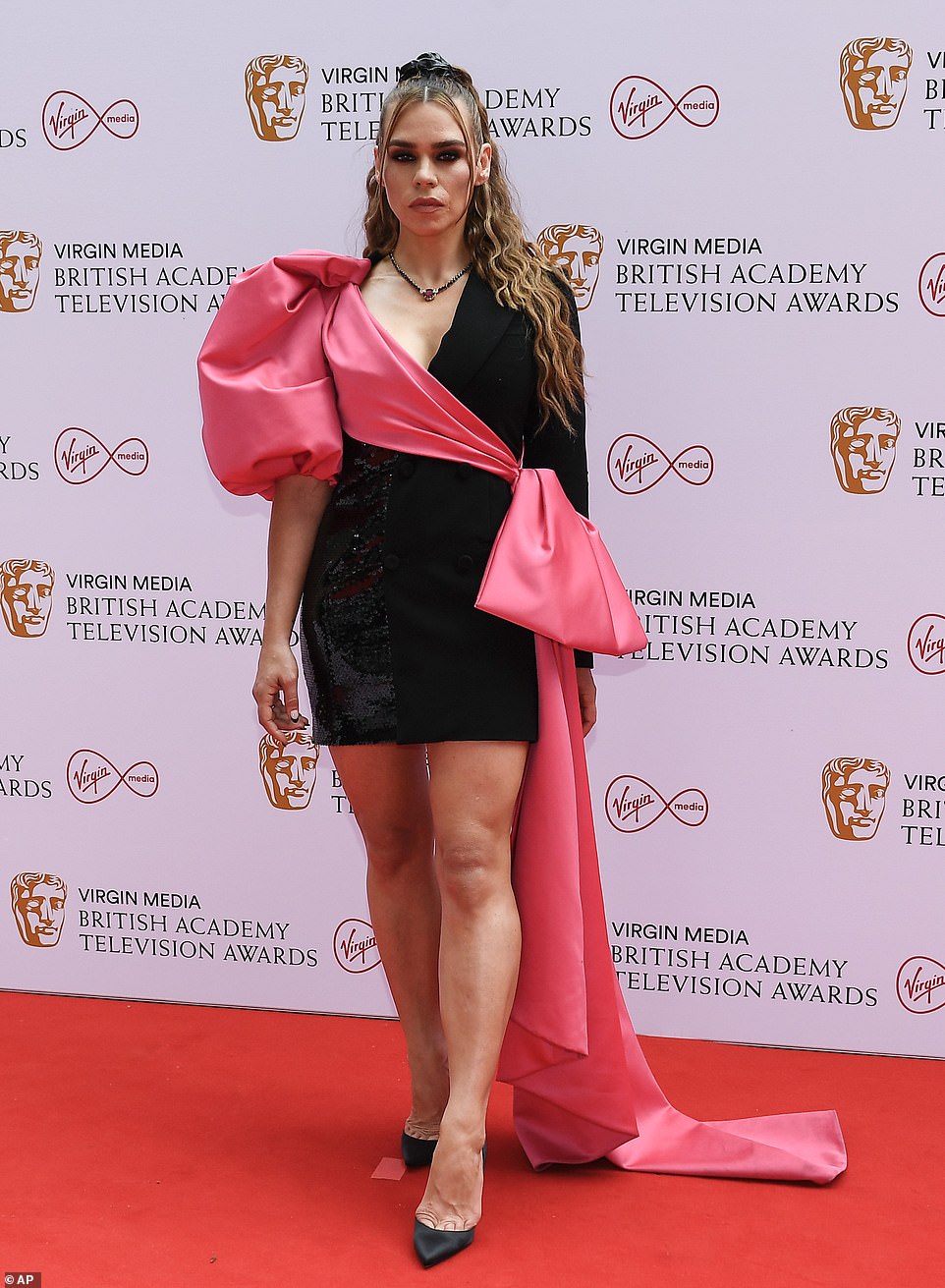 Suits you! Actress Billie turned heads as she arrived on the red carpet in a black tuxedo dress, a part of which was sequinned

Pink: The star’s ensemble was given a dramatic touch with a single puffy pink sleeve, which descended into a bow and train 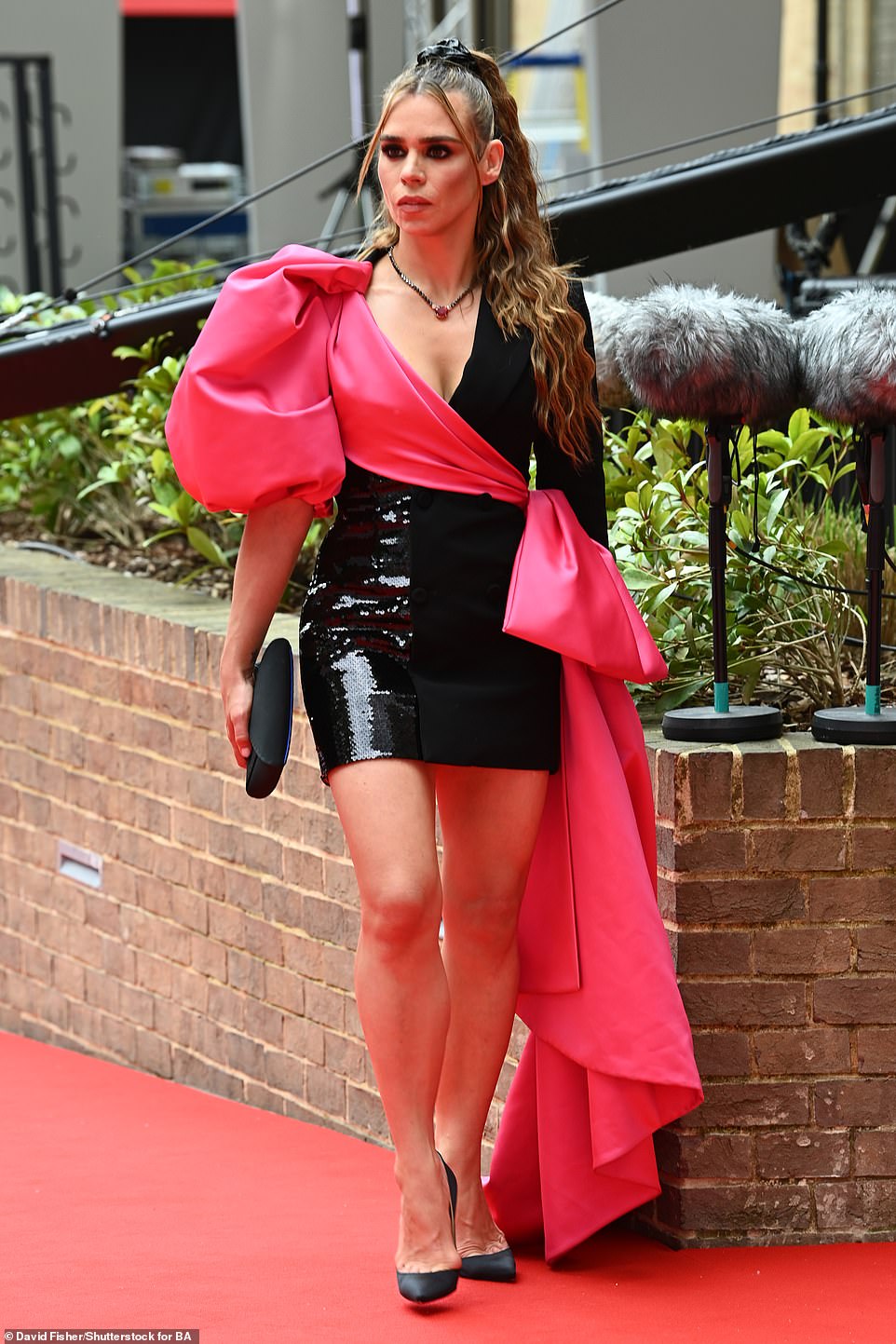 Glamour: Toting a clutch bag, Billie, nominated for her turn in I Hate Suzie, accessorised with a glittering statement necklace

Standing tall in a pair of silver strappy heels, the South African beauty’s dress of choice perfectly hugged and flattered her enviably toned frame as she posed up a storm for photographers.

With a pair of dazzling drop earrings complementing her stunning ensemble, the TV personality wore her honey brown tresses in a playful bob, while her good looks were highlighted with a palette of glossy makeup.

Claudia’s dress featured a series of shimmering silver tassels, adding a contrasting touch to her look, which also included a pair of vertiginous black heels. 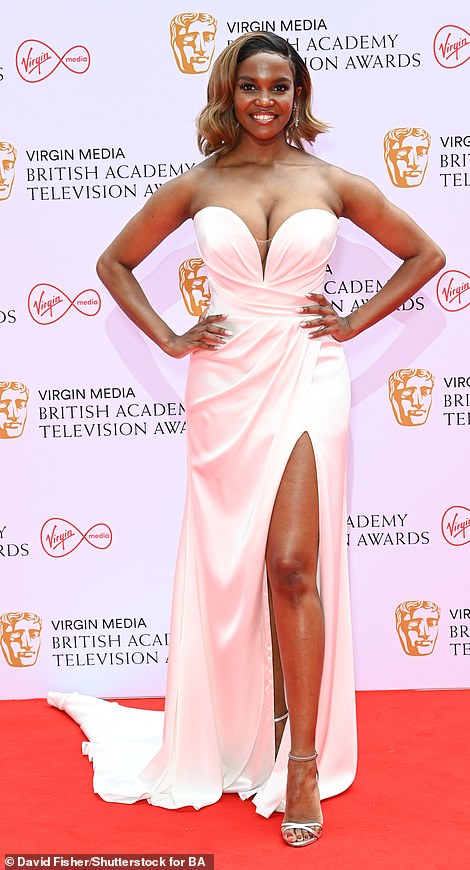 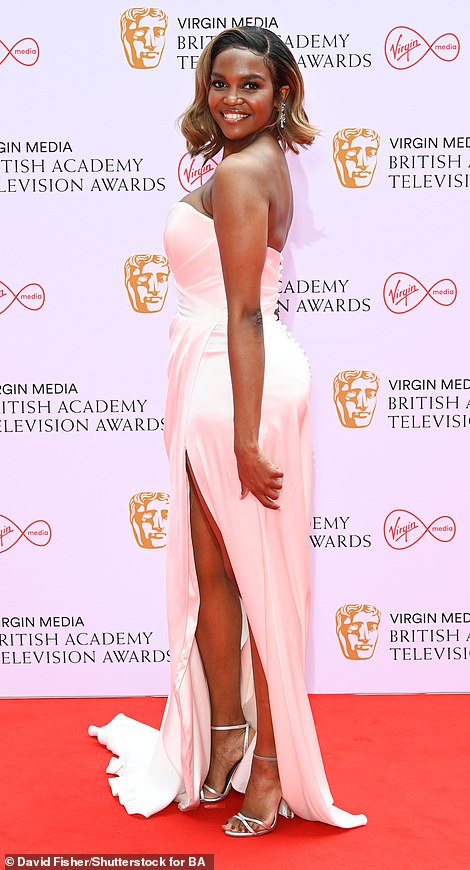 Glamorous: Oti Mabuse was among the stars in attendance at the TV BAFTA Awards, held at London’s TV Centre on Sunday 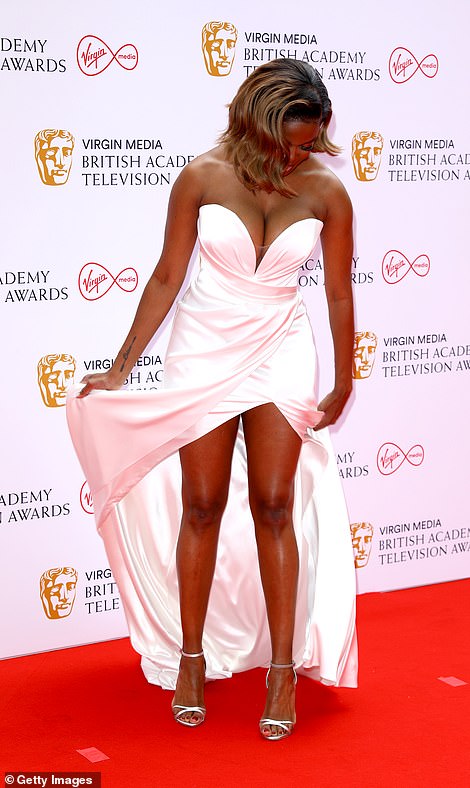 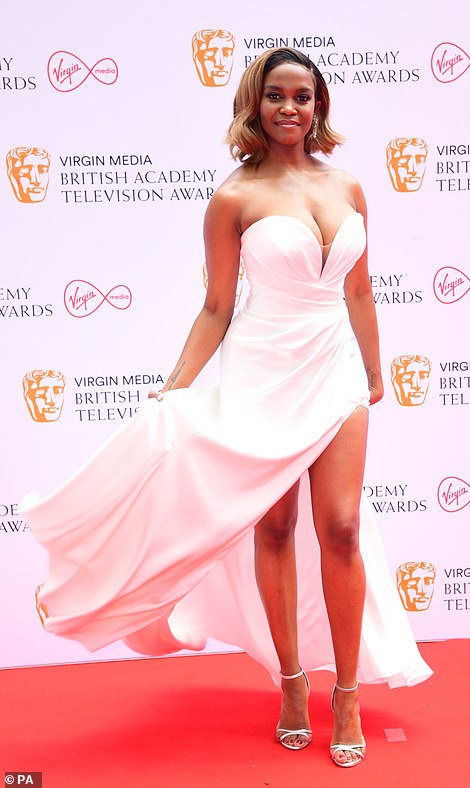 Monroe moment: The star appeared to be having something of a Marilyn Monroe moment as she adjusted on the red carpet 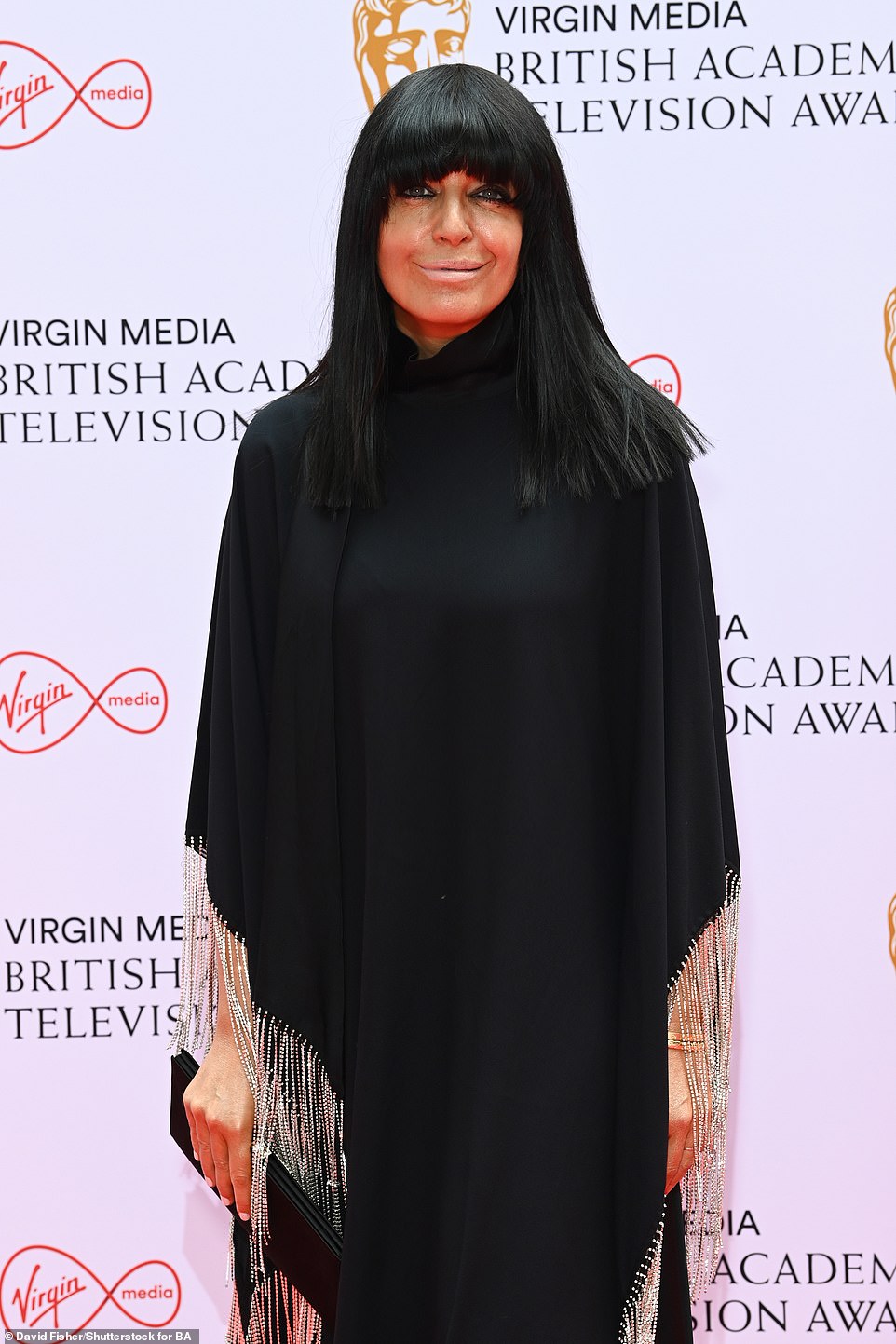 Making a statement: Claudia’s dress featured a series of shimmering silver tassels, adding a contrasting touch to her look, which also included a pair of vertiginous black heels

Toting a black envelope clutch bag, the TV personality wore her signature raven locks in a straight sleek style with a long fringe, while a generous application of makeup highlighted her looks.

Also in attendance was AJ Odudu, who stunned as she stepped out in a red feathered one-shoulder gown, which boasted a backless feature.

This year, BAFTA will be beaming celebrities that can’t attend onto the red carpet as holograms.

And ceremony hosts Stacey Dooley and Vick Hope will introduce the hologram guests to those actually at the socially distanced ceremony. 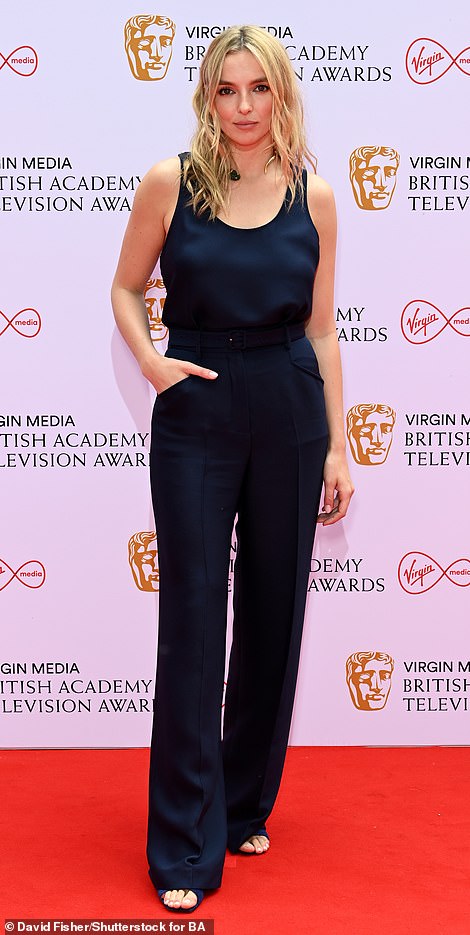 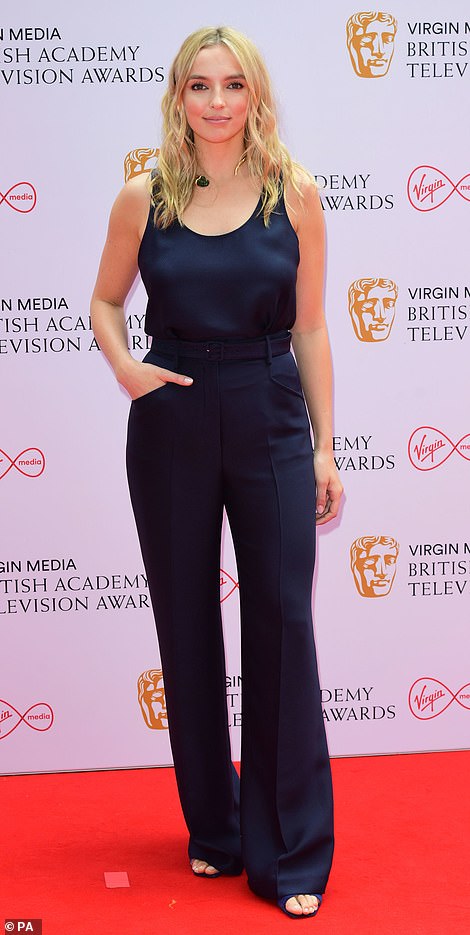 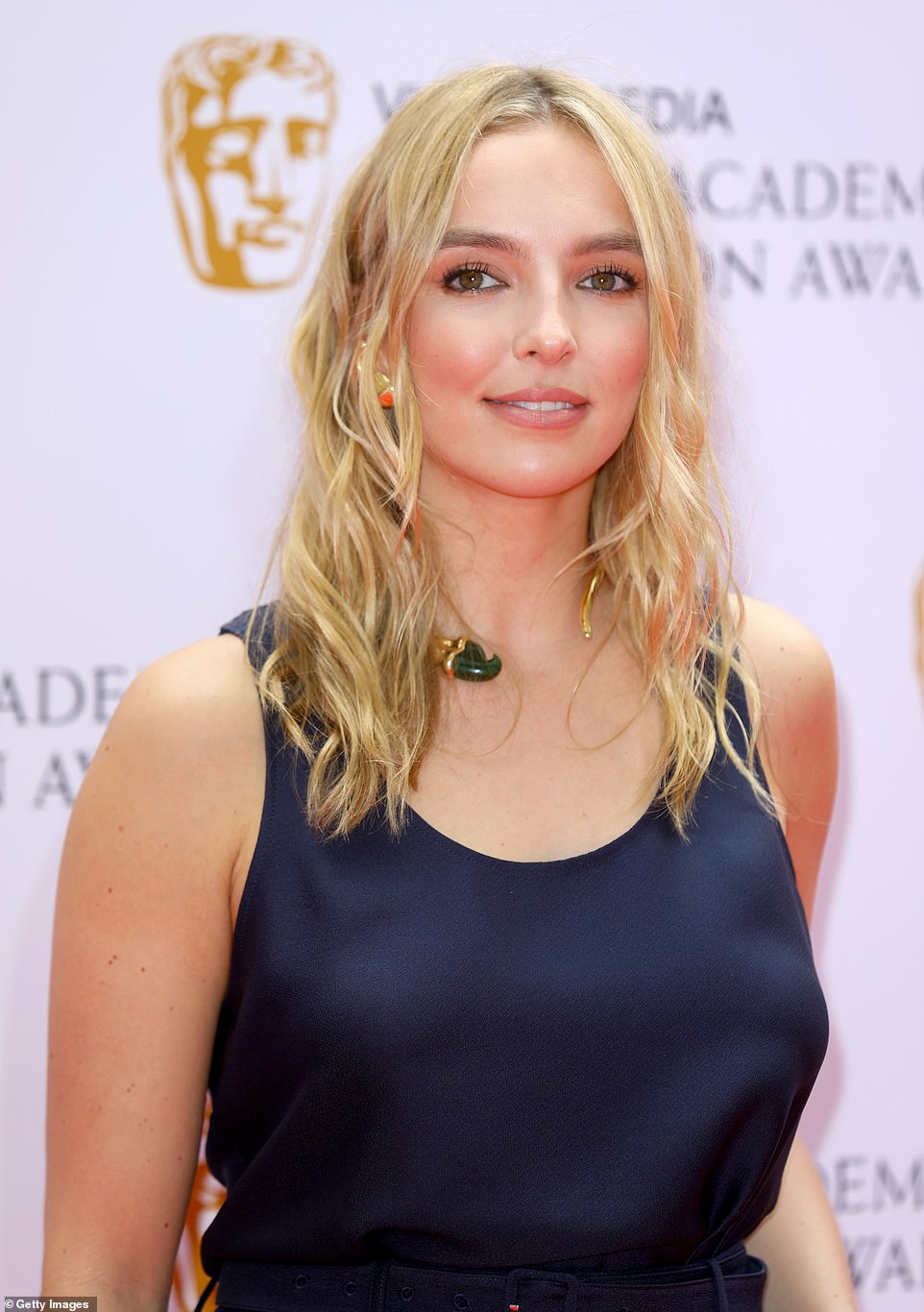 Bold jewellery: While her ensemble was simple, she added bold jewellery, including an open choker and colourful earrings 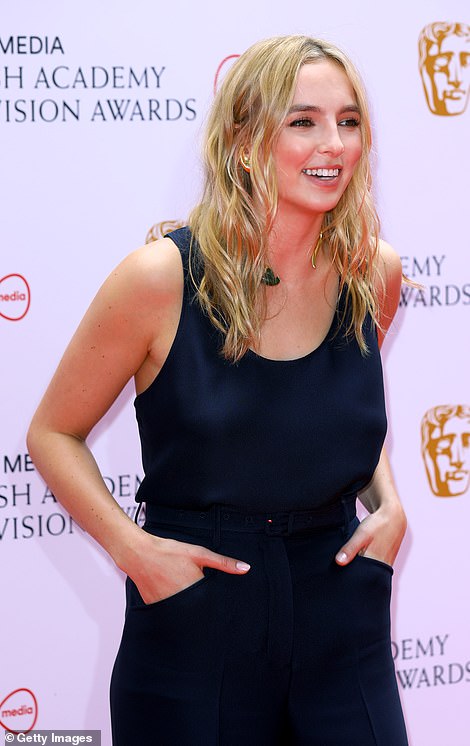 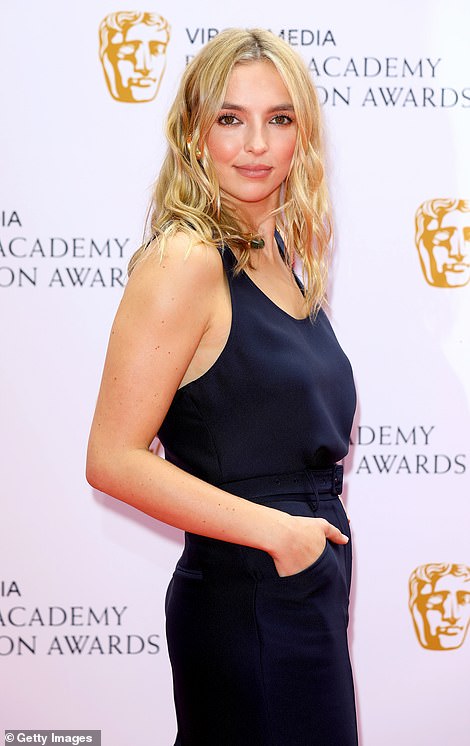 Strike a pose: Nominated for her critically-acclaimed turn in Killing Eve, the star gleefully posed up a storm for photographers

Of her red carpet role, Vick revealed last week: ‘If you’re anything like me, over the last year your WhatsApp groups will have been nonstop about a recent episode or moment in the latest TV drama, documentary, reality or even cooking show.

‘It’s made me fall in love with TV all over again, and it’s because of this that I think that the Virgin Media BAFTAs feels extra special this year.

‘To be able to chat directly with the TV fans who have voted for their favourite Must-See Moment nominee and connect them to their favourite stars via holograms live on the red carpet will be a unique, once in a lifetime experience.

‘I’m so excited to bring a bit of this magic to the fans at home, it’s going to be an emotional one.’ 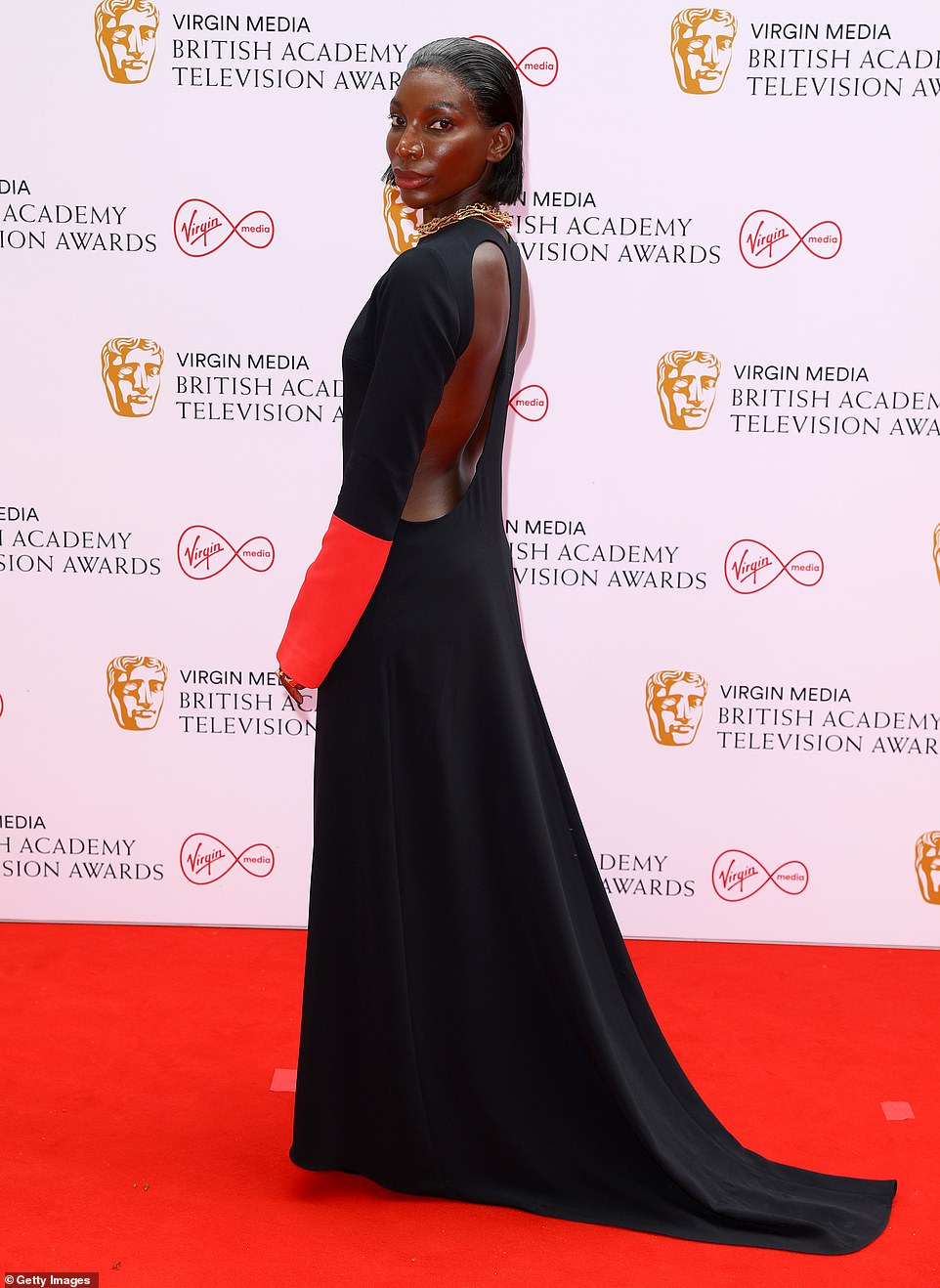 Eye-catching: Michaela Coel looked sensational as she made her way down the red carpet in a flowing black backless gown 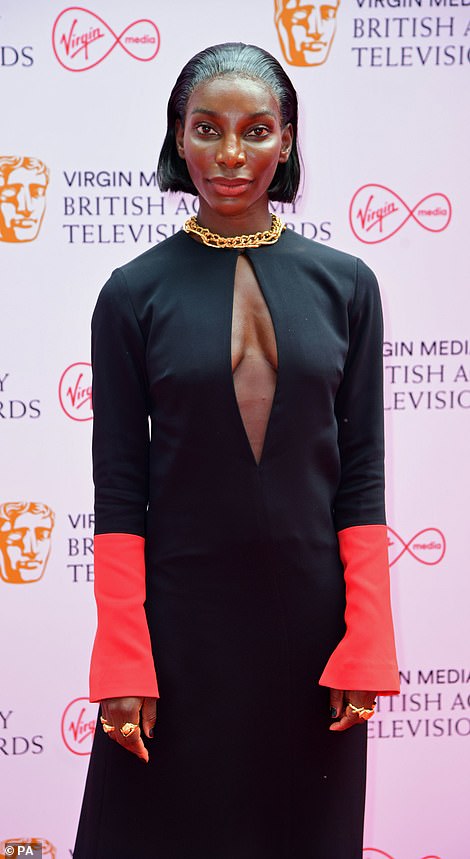 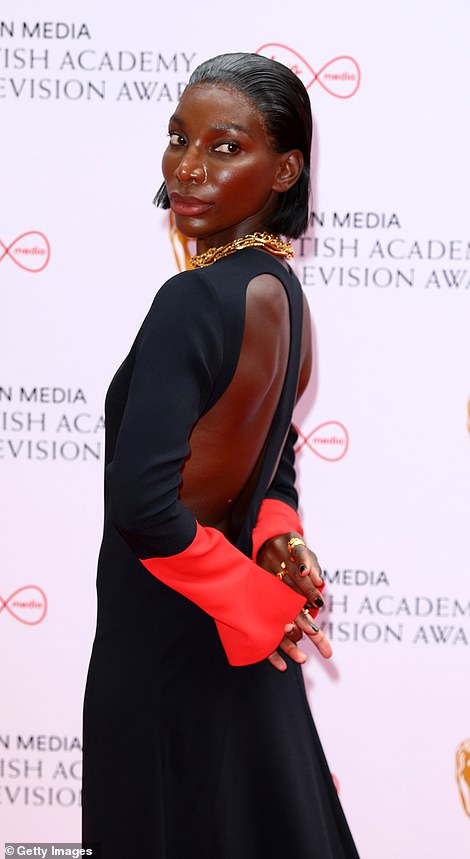 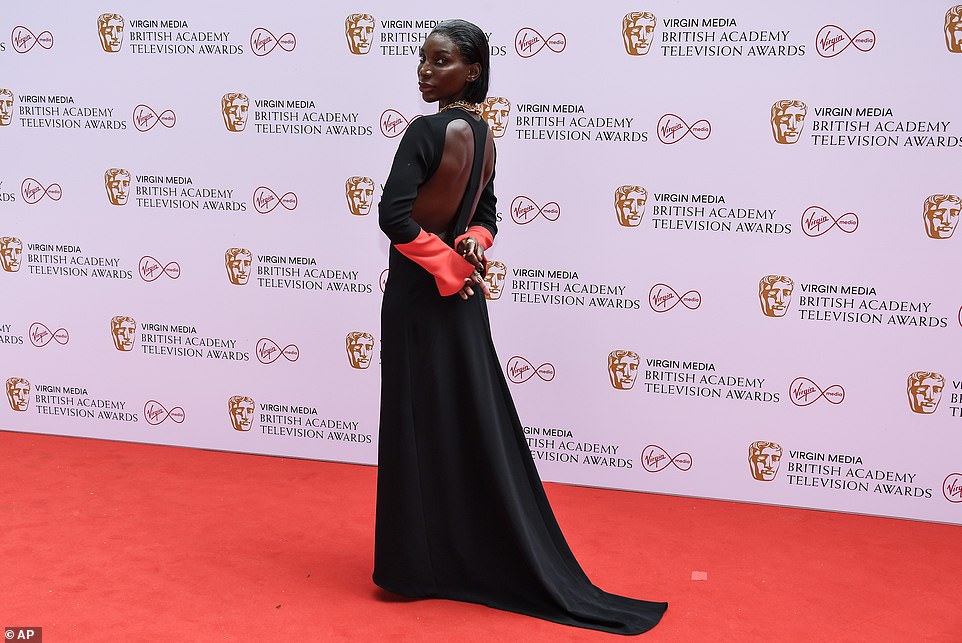 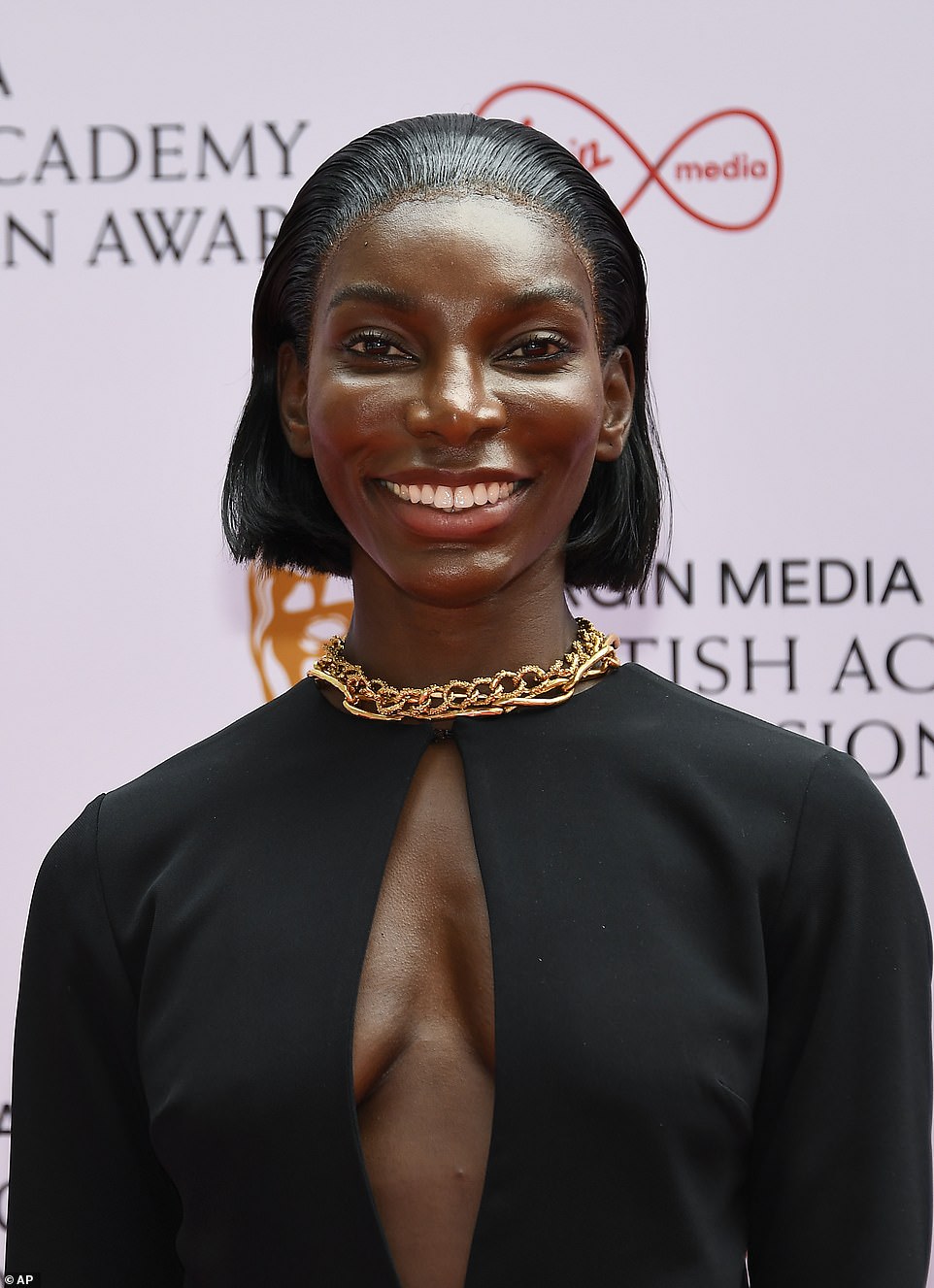 Shine bright: Nominee Letitia Wright arrived in a breathtaking black dress, which was embellished with crystals on the top 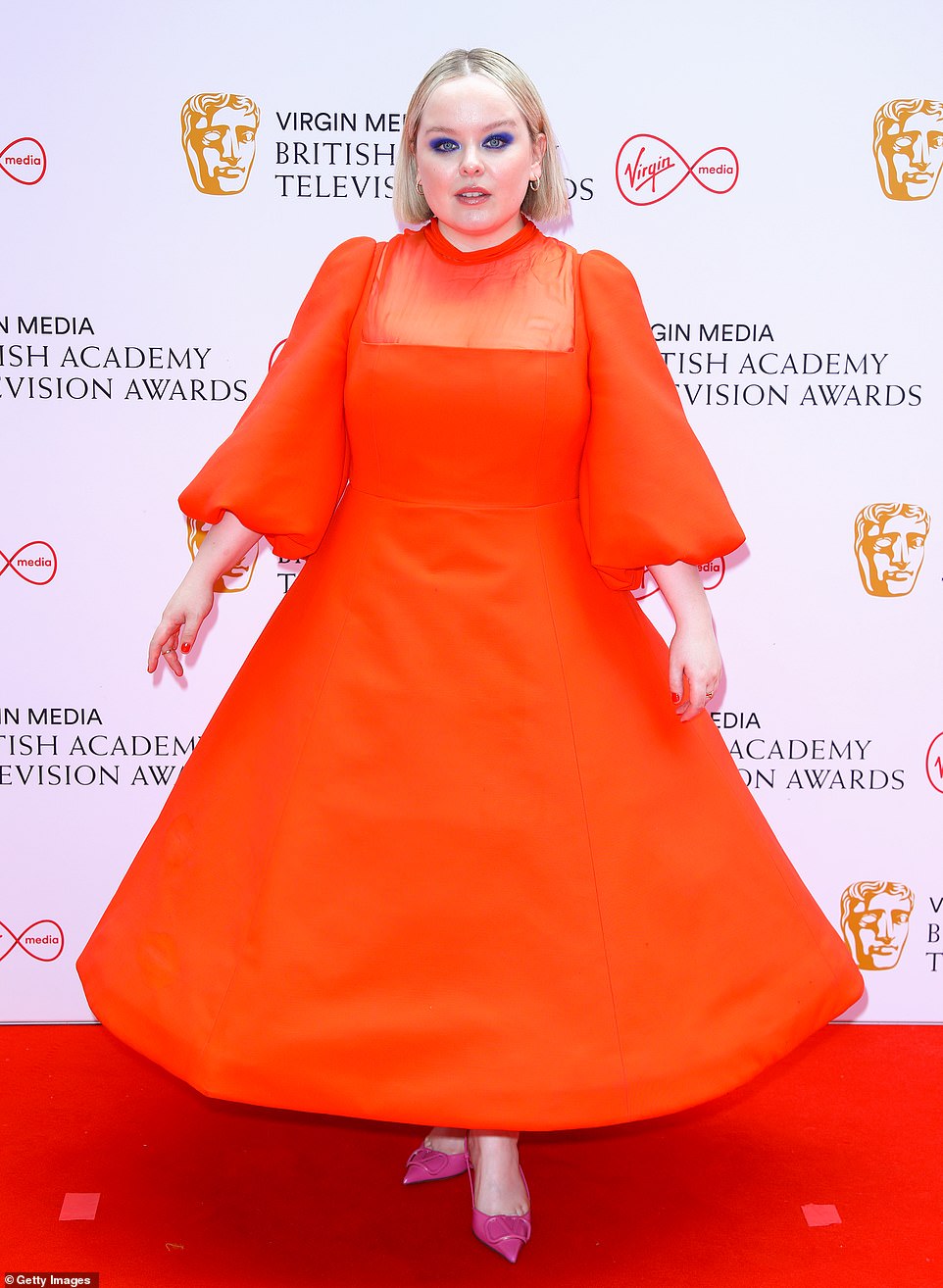 All things bright and beautiful: Bridgerton actress Emma Coughlan wowed as she hit the red carpet in a flowing orange gown 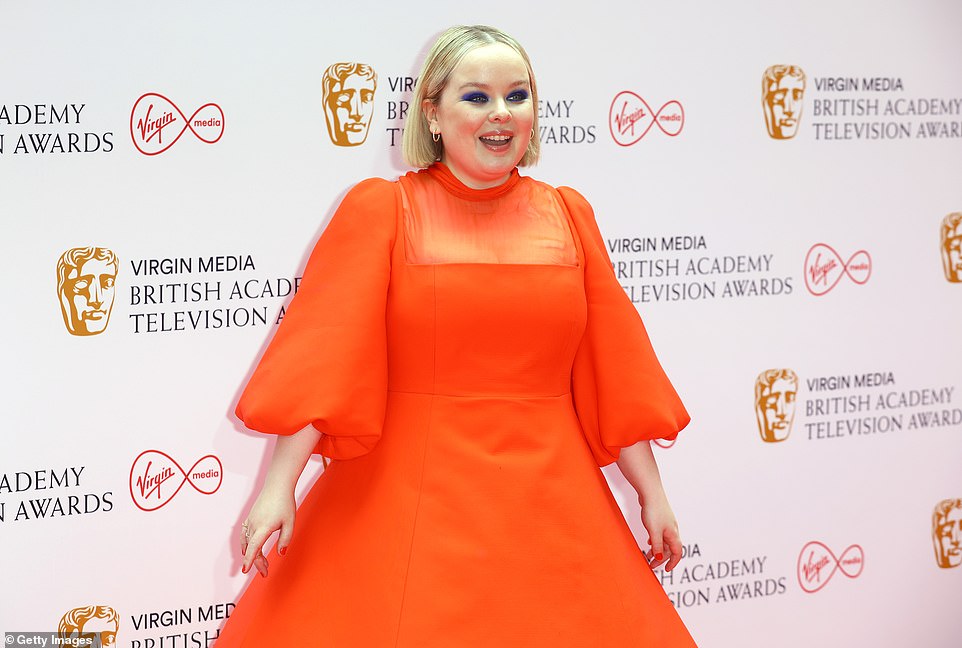 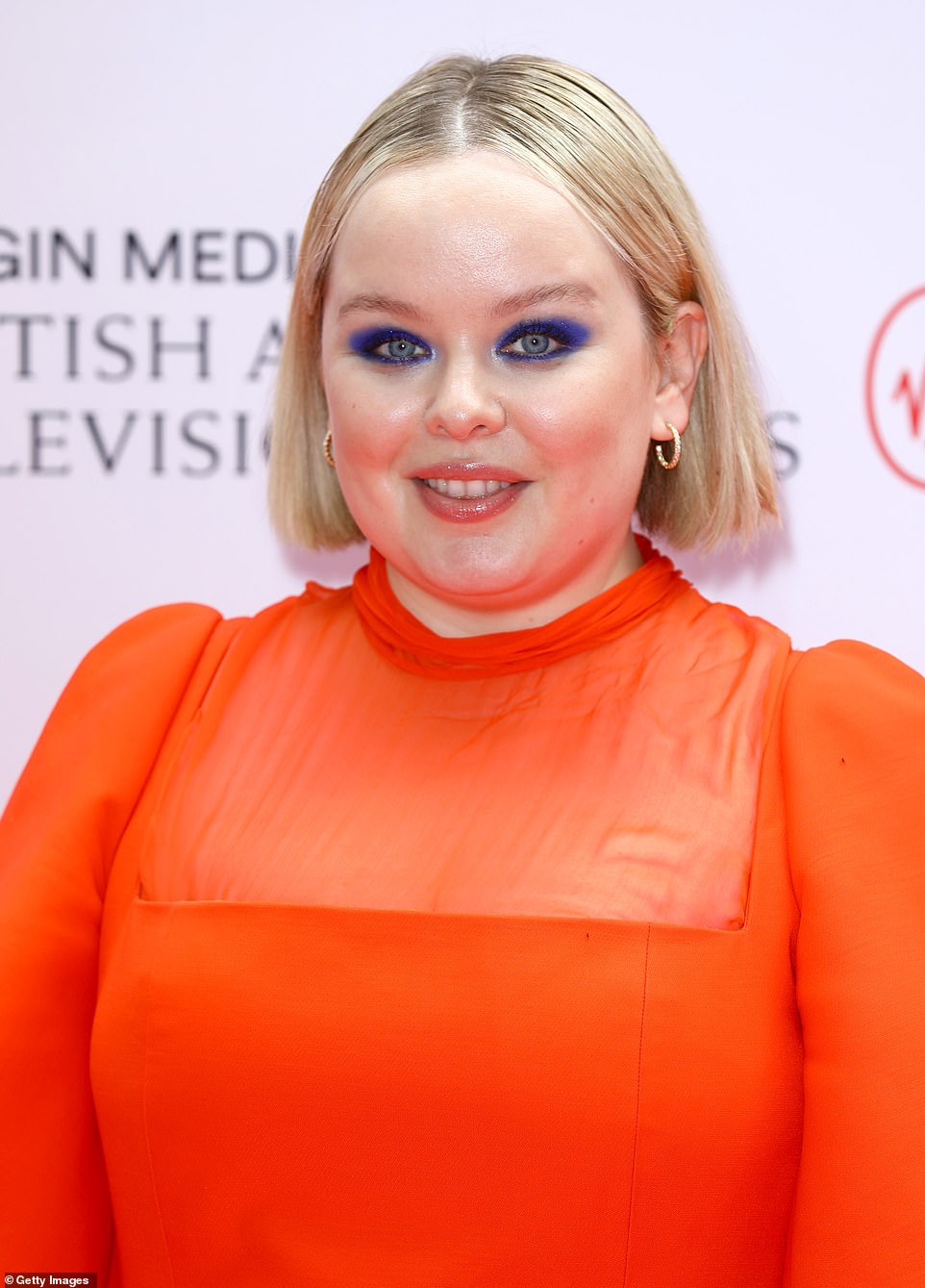 COVID-19 restrictions mean TV fans can’t be in attendance on the red carpet as usual this year and some nominees won’t be able to attend because of filming bubbles.

All content will be captured by a live stream camera and will enable everyone at home to see the action unfold from the comfort of their living room.

Members of the public can watch a livestream of the red carpet and be a part of the glamour by visiting Virgin’s website from noon on Sunday.

They can also choose from a selection of digital red carpet outfits to help them get into the spirit of the Awards and get ready carpet ready.

If selected, they will be beamed onto the red carpet and could even ask a question to their favourite celeb with a video of the interaction being sent to the fan after. 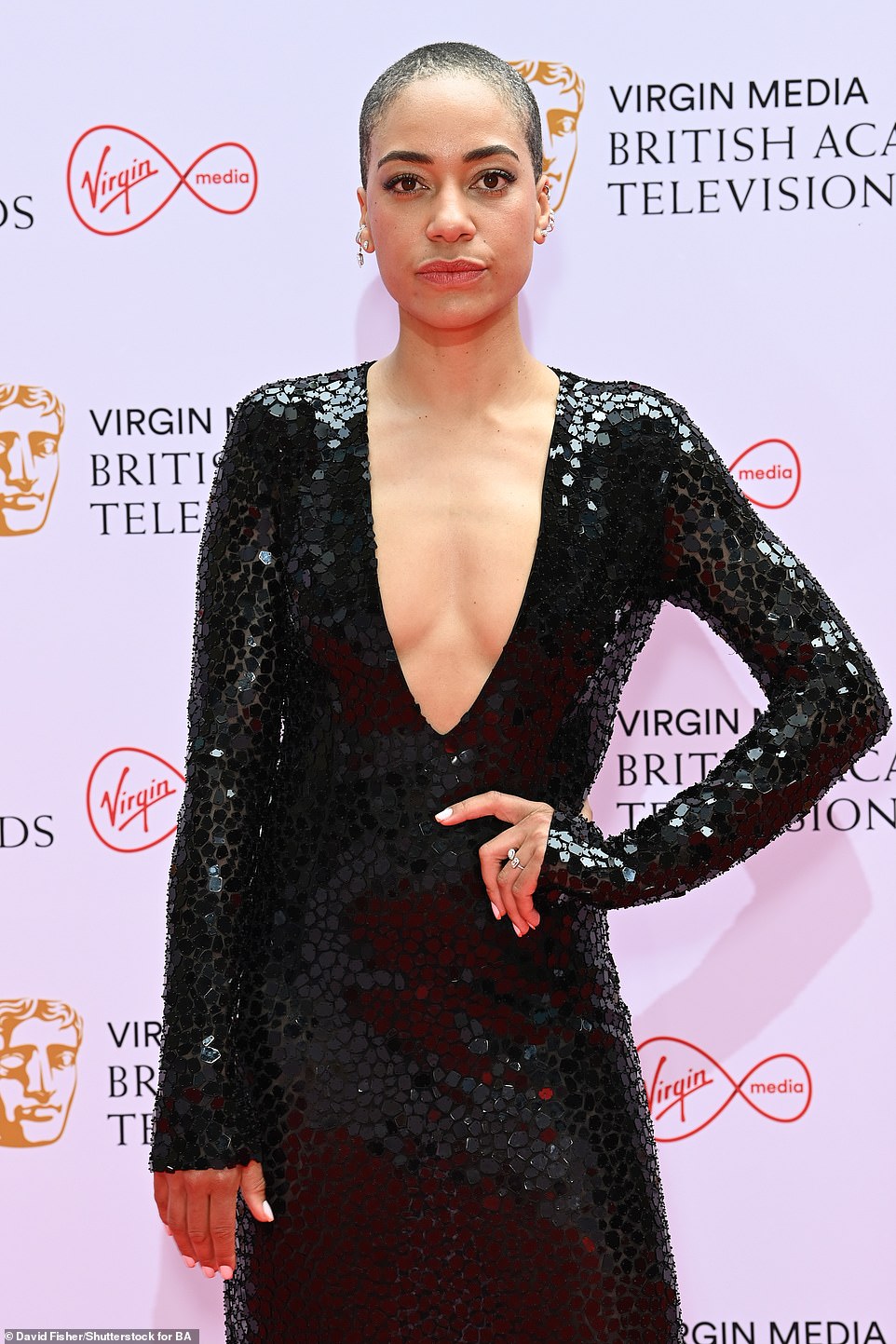 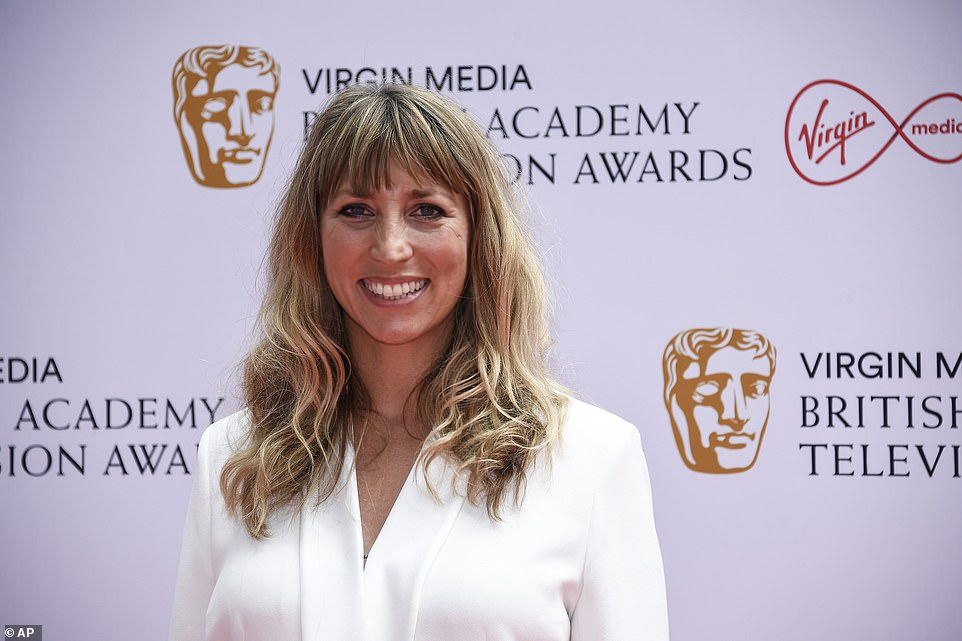 Several of the year’s biggest TV moments will be celebrated on Sunday, with Diversity’s controversial BLM-inspired routine on Britain’s Got Talent, which sparked 24,500 complaints to Ofcom, featured in the must-see moment category.

The category, which is voted for by the public, also sees nods to Penelope being revealed as Lady Whistledown in Bridgerton and when Luke Skywalker appeared in the climax of The Mandalorian’s second season.

However it’s Small Axe which leads this year’s nominations with 15 nods.

The BBC One anthology film series, directed by Sir Steve McQueen, picked up six TV nominations and nine in the craft categories, including a nod for the Mini-Series gong alongside Normal People, Adult Material and I May Destroy You.

Small Axe – which features five films that tell stories about lives of West Indian immigrants in London from the 1960s to the 1980s – also picked up two Leading Actor nominations with John Boyega and Shaun Parkes both receiving nods.

Letitia Wright, who also starred in the series, is up for the Leading Actress prize, and she will face competition from Billie Piper (I Hate Suzie), Daisy Edgar-Jones (Normal People), Hayley Squires (Adult Material), Jodie Comer (Killing Eve) and Michaela Coel (I May Destroy You).

Elsewhere, I May Destroy You star Paapa Essiedu will go up against John and Shaun for the Leading Actor award, as well as Normal People actor Paul Mescal, Baghdad Central’s Waleed Zuaiter, and The Crown’s Josh O’Connor.

The Crown received 10 nominations – four for TV and six for the craft categories – including a nod for the Drama Series accolade alongside I Hate Suzie, Save Me Too and Gangs of London.

Other nods included This Country, Man Like Mobeen, Inside No. 9, and Ghosts for the Scripted Comedy prize, and siblings and This Country creators Daisy May and Charlie Cooper received nominations for the Female and Male Performance in a Comedy Programme gongs, respectively.

The ceremony will be hosted by Richard Ayoade, while Stacey and Vick take charge of the red carpet presenting.

PAAPA ESSIEDU – I May Destroy You

MICHAELA COEL – I May Destroy You

WERUCHE OPIA – I May Destroy You

FEMALE PERFORMANCE IN A COMEDY PROGRAMME

DAISY MAY COOPER – This Country

MALE PERFORMANCE IN A COMEDY PROGRAMME

REECE SHEARSMITH – Inside No.9

I MAY DESTROY YOU

THE BATTLE FOR HONG KONG (DISPATCHES)

DAVID MITCHELL – Would I Lie to You? At Christmas

LOSING IT: OUR MENTAL HEALTH EMERGENCY

ONCE UPON A TIME IN IRAQ

RACE ACROSS THE WORLD

THE SCHOOL THAT TRIED TO END RACISM

DISABLED NOT DEFEATED: THE ROCK BANS WITH LEARNING DISABILITIES – DELTA 7

THEY SAW THE SUN FIRST

AMERICAN MURDER: THE FAMILY NEXT DOOR

LOCKED IN: BREAKING THE SILENCE (STORYVILLE)

VIRGIN MEDIA’S MUST-SEE MOMENT (voted for by the public)

Fatty liver disease symptoms: The texture of your poo can indicate if your organ is damage