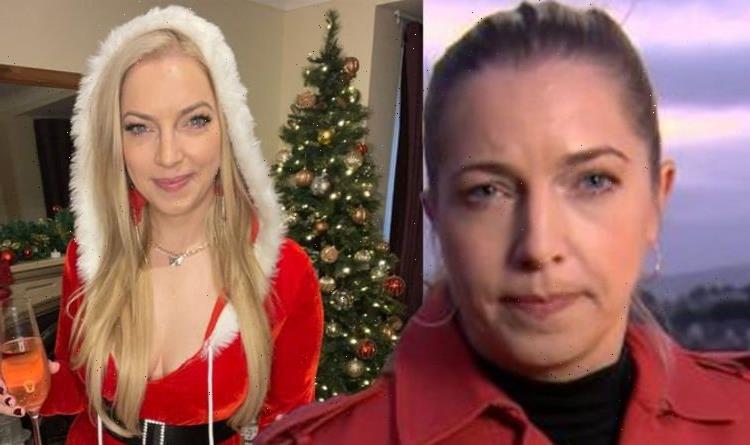 Emma Vardy, 40, looked sensational as she took to Twitter to share her good deed on Christmas Day. Social media users were distracted by the BBC presenter’s racy Christmas costume, however.

The presenter wowed in the ensemble which boasted a low neckline and a fur-lined hood.

Emma’s plunging ample assets were on show, with a black belt drawing in the presenter’s waist as she posted in front of the Christmas tree.

In view of her 49,600 followers she penned: “Merry Christmas Belfast!!

“Been out delivering presents on the doorstep to family members struck down by Covid – so couldn’t resist a wee outfit. (sic)

“Hope everyone’s having a great day.”

Many took to the comments to make sure the presenter knew how amazing she looked, while she deliver presents to families struck by Covid.

Thisis_taylors added: “Now if you presented news reports dressed like that BBC ratings would go through the roof. Looking well as always.”

Cyberbeagle1 commented: “Hope you’re doing the 6 o’clock in this outfit”

The post comes after she made a spoof sex video of herself and her boyfriend Aaron Adams to raise money for NHS charities.

The sex scene was one of the segments in a video made by Aaron and friends from his amateur football team to raise money for NHS Charities Together’s Covid-19 appeal.

Emma was filmed beneath Aaron and signed “I want to be free” before the video cut to another of the football players.

This did not go down well with the BBC however, as top bosses failed to see the funny side and sent out an email to newsrooms reminding employees about social media use and editorial guidelines.

The finished film was posted on Mr Adams’ Twitter profile and the club’s Facebook page, with the message: “So here it is. Four weeks of lockdown… no football… and this is what happens.”

Anger from BBC bosses did see quick edits made to the clip.

The raunchy scene involving Emma, an award winning journalist, was edited out of the fundraising video with a new version subsequently shared on social media instead.

Emma is currently the Republic of Ireland Correspondent at BBC News.

She began her broadcasting career as a junior at Sky News, working as an editorial assistant for Sky Sports.

In July 2006, Emma joined BBC Cornwall as a sports presenter.

On the news she covers stories related to politics, home affairs and counter terrorism.

She lives with her boyfriend Aaron Adams in Belfast, who is part of the amateur football team Belfast Ravens.

How does your partner act in social situations? The ‘inappropriate’ sign of dementia

Riverside home that comes with its own private island for sale for £1.4million
Recent Posts