Home » Celebrities » Behind the Scenes of Netflix's 'Sex/Life' (Exclusive) 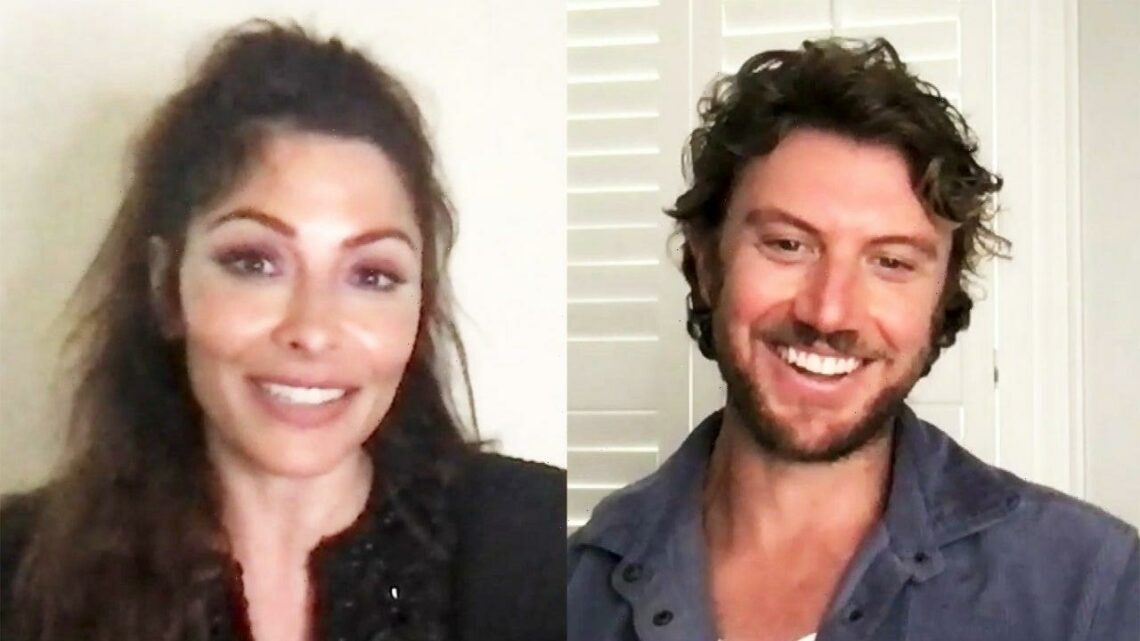 Behind the Scenes of Netflix's 'Sex/Life' (Exclusive)

Netflix’s steamy new drama, Sex/Life, quickly became the talk of the streaming platform after it premiered on June 25 — and for good reason.

The show tells the compelling, yet equally sexy, story of Billie Connelly (Sarah Shahi), a stay-at-home mother of two who finds herself longing for her wilder days as a single woman in New York City.

While Billie’s life with husband Cooper (Mike Vogel) is comfortable, she finds herself dreaming of what could have been with her ex-lover, Brad (Adam Demos). Not only does Billie begin to reminisce and fantasize about her past, she also starts journaling her thoughts, leading to one of two theories: Could it cause a sexual revolution with Cooper? Or perhaps take her down the path of “what could have been” with Brad?

ET’s Lauren Zima chatted with Shahi, Vogel and the drama’s showrunner, Stacy Rukeyser, ahead of the premiere, and they all shared just how much work went into perfecting the steamy scenes, revealed a few secrets about the onscreen romance, and spoke about the importance of the show. Vogel said that even though the show is super racy, it’s all driven by the storyline.

“They said from the beginning, we do not want to have a bunch of gratuitous physical scenes, so if it’s not driven by the story, we’re not doing it. And so at least in what I was involved in, I completely felt that there was always something pushing the physicality,” Vogel explained. “But yeah, it gets a little hot.”

When it came to those super sexy scenes, Vogel thanks the show’s intimacy coordinator for helping things run smoothly. “This is certainly, without a doubt, the most racy thing I’ve ever done,” he shared. “[Our intimacy coordinator] did an incredible job. Every one of these scenes, prior to filming, was rehearsed. There was not a hand out of place, there was not a move that was made that was not expected, so you can go into these scenes feeling completely protected, completely taken care of, and it allows you to concentrate more on the emotion and in what’s happening with these characters knowing that there are no surprises coming your way. And I think for a show like this, it’s a necessity and they did it wonderfully.”

Vogel also gave his take on the show, calling it “a passion and desire-filled journey through a relationship told through the lens of the female gaze.”

For Shahi, she shared that it took a lot of hard work to get to a place of comfortability. “We would rehearse on the weekends and we would discuss everything,” she explained of the steamy scenes, noting she, too, credits the work of the intimacy coordinator. “We would discuss our comfort levels, where you can and can’t put your hands, so that way on the day, there’s no real surprises.”

“The other important detail, which in my opinion, is what really sets the sex on this show apart from other shows that I’ve seen is we would pay attention to the most minute things,” she continued. “For example, the breath, excuse me, how are the characters breathing in this sex scene? Is it more intimate and is it quiet and is it a lot more in each other’s eyes and that eye contact or is it something that is more graphic and more wild? Because a lot of times, these sex scenes, they’re not just sex scenes. They’re informing the emotional states of the characters.”

Shahi said that when it came to her scenes with Demos’ Brad, “it was sometimes more intimate,” sharing: “It wasn’t just sex for sex. We really choreographed things and paid attention to the most minute details that would really help tell the stories of where these characters were at.”

“Not only is it sexy, but the storylines are incredible,” Shahi added. “The stories are just so relatable and the show has the courage to really put issues and questions about relationships and motherhood and just who we are. It just has the balls, I think, to put these questions out there in a way that no show really has before.”

The script itself had Shahi in her feelings. “I was just hoping it would be as good as I wanted it to be,” Shahi said, noting that because of all the people who worked on the show, it ended up surpassing even her hopes. “I’m incredibly proud and so grateful to be a part of this show.”

Rukeyser also gave props to the intimacy coordinator, saying: “It was exciting to get to look at this new way of showing female sexuality and desire. … [TV] often [shows sexuality] from the male point of view. … This is the flip, this is the kind of sex that we think women like and that women fantasize about and our camera hangs on the male body more than the female body. It’s about her experience and she is not objectified for us.”

Rukeyser elaborated: “What was exciting for me was the chance to create a show in this nostalgia-filled, sparkly fever dream version of the past and the best sex you’ve ever had and the impossibly sexy men you had it with, but it is also rooted in a deeper exploration of what it is as women when we are expected to sort of grow up and become responsible grownups and all of the things that we are supposed to give up along the way. It’s really a chance to, you know, to answer that age-old question, ‘Can you have it all?'”

Binge Sex/Life on Netflix now. For more on the show, watch the video below.

Mets face yet another doubleheader as game vs. Pirates postponed