Home » Celebrities » Britney Spears’ Son, 13, Claims His Mom Might Quit Music For Good & Admits He’s A Fan Of Her BF 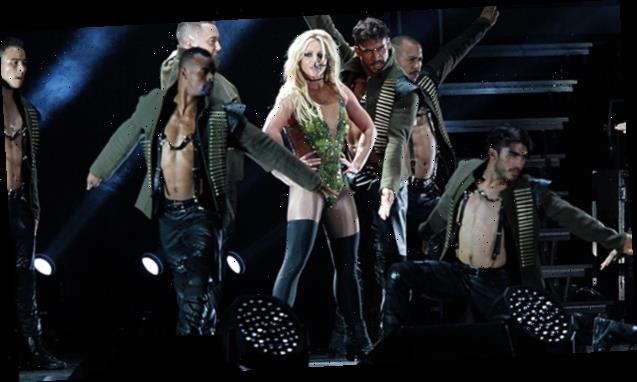 Britney Spears’ Son, 13, Claims His Mom Might Quit Music For Good & Admits He’s A Fan Of Her BF

Jayden Federline has spilled ALL of the tea. In one IG Live session, Britney Spears’ son slammed his grandfather, claims she’s thought about quitting music, and revealed that he’s ‘good’ with her boyfriend, Sam Asghari.

” ‘What’s going on with my mom?’” asked Jayden Federline, during a March 3 Instagram Live session, per Us Weekly. The 13-year-old son of Britney Spears and Kevin Federline went online to field questions from his followers and, naturally, Britney, 38, was a popular subject. Specifically, some fans wanted to know if she was working on a comeback, and Jayden had some shocking news. “Actually, I haven’t seen her doing a lot of music at all. I don’t think that … I don’t know, dude. I don’t even know. I remember one time I asked her, I said, ‘Mom, what happened to your music?’ and she was like, ‘I don’t know, honey. I think I might just quit it.’ I’m like, ‘What? What are you saying? Like, do you know how much bank you make off of that stuff?’”

Jayden said he would “tell you guys the whole story about my mom and stuff if I get 5,000 followers on my Instagram. That stuff will come out way in the future [when] I get really popular.” Unfortunately, that won’t be for a while, since he’s set his account to Private. It seems that though he said he wouldn’t get in trouble for his live stream (“I mean, my dad doesn’t care. I have the best day ever. My dad’s literally Jesus”), it seems he was wrong about that.

Along with praising Kevin Federline, Jayden blasted his grandfather Jamie Spears – who has been Britney’s conservator since 2008 save for a brief moment in 2019, when he stepped down due to serious health issues. Jayden said his grandfather s “a jerk” and “he’s a pretty big dick.” At least he had some positive thoughts on Britney’s boyfriend, Sam Asghari. “I like Sam. He’s good. He’s nice. He’s a really good dude.”

Considering that Kevin obtained a restraining order against Jamie Spears in Sept. 2019, it’s not surprising that Jayden dislikes his grandfather. “There was a disagreement that occurred while Britney and the children were visiting with Jamie at his home that led to a physical altercation that was observed by Jayden,” Federline’s lawyer, Los Angeles divorce attorney Mark Vincent Kaplan, told NBC News. “Britney did the right thing and removed the children and took them out of there, but the trauma to the kids is nonetheless.” Kevin filed documents in August 2019 to officially adjust the 50/50 custody agreement to reflect reality, with Kevin reportedly maintaining custody of the boys “closer to 90” of the time.

As for music, Britney hasn’t released a new album from 2016’s Glory, and she doesn’t have any plans to change that soon, a source told HollywoodLife EXCLUSIVELY. Right now, she’s focused on “living a low-key, normal life right now, and she doesn’t feel ready to perform. She’s focusing on her health, family, and personal well-being.”