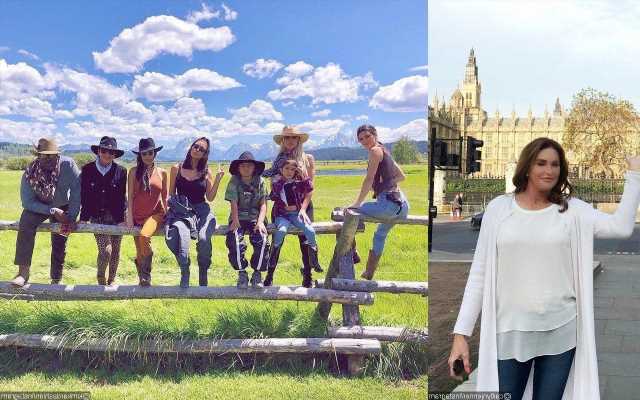 When making an appearance on ‘The Issue Is’, the retired Olympic gold medal-winning opens up to host Elex Michaelson that coming out as a transgender ‘was easier’ than talking about her governor run.

AceShowbiz –Caitlyn Jenner has spoken out about how her family, including the KarJenner, reacted to her run for California governor. When making an appearance on “The Issue Is” on Thursday, June 4, the former “I Am Cait” star revealed that it was “tougher” for her to tell her family that she is a Republican than a transgender.

When sitting down with Elex Michaelson, the former athlete was asked if Kim Kardashian, who advised former President Donald Trump on criminal justice reform, was going to be an adviser to her on the important issue. She replied and laughed, “One thing, and I’ve talked to all my family about running for governor and to be honest with you, it was easier to come out as trans than as a Republican candidate for governor.” She then pointed out, “It was a lot tougher to sell.”

Caitlyn herself announced her bid to run against Democratic Governor Gavin Newsom, who faces a recall election, back in April on Twitter, writing, “I’m in! California is worth fighting for.” At the time, she also shared an official press release in which she blasted Gavin for enforcing an “over-restrictive lockdown” to tackle the COVID-19 pandemic.

“For the past decade, we have seen the glimmer of the Golden State reduced by one-party rule that places politics over progress and special interests over people,” Caitlyn said in the statement. The 71-year-old added, “Sacramento needs an honest leader with a clear vision. I have been a compassionate disrupter throughout my life, from representing the United States and winning a gold medal at the Olympics to helping advance the movement for equality.”

A month ago, Caitlyn released her first campaign video. In the clip, she promoted her goal to restore the Californian dream and took a jab at “career politicians” Gavin and Speaker of the House Nancy Pelosi. The former spouse of Kris Jenner also dubbed them “elitists.” Calling them out, she showed footage of Nancy breaking COVID protocols by visiting a hair salon without a mask and a photo of Gavin being present at a large dinner party, where guests weren’t wearing masks or practicing social distancing.

Caitlyn showed off her trophies and Olympic gold medal in the nearly 3-minute ad video. “I’ve always been a dreamer,” she said in the clip. As old footage took over, she continued her narration, “California was once the envy of the world, we had what everyone else wanted. the American dream grew up here.”

Elsewhere in the video, the father of Kylie Jenner and Kendall Jenner also blamed politicians and their policies for shattering the dream. “The government is now involved in every part of our lives,” she strongly declared. “They’ve taken our money, our jobs, and our freedom. California needs a disrupter – a compassionate disrupter!”