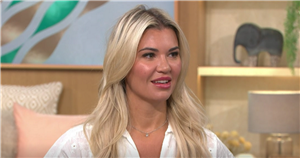 Christine McGuinness has opened up on her relationship with her estranged dad Johnny and shared her heartbreak over him “choosing drugs” over her as a child.

The 33 year old beauty went into detail about her difficult childhood growing up with a parent addicted to heroin, claiming that he is one of the longest-living addicts registered in the UK.

Christine, who is married to Top Gear presenter Paddy McGuinness, 48, has largely kept her father’s battle private before now, but in emotional passages in her new memoir, she reflects on some of the most harrowing moments of her life.

“I saw my dad inject heroin,” she tells readers, in an excerpt obtained by The Sun. “As a teenager, I struggled with his addiction. I blamed myself.”

The blonde star went on to say it was her own journey as mother – to eight year old twins Penelope Patricia and Leo Joseph, and Felicity Rose, five – that made her reflect on her own upbringing.

“When I became a mum, I kept thinking about how he chose drugs over his own kids,” she recalled.

“But as I’ve gotten older, I’ve realised it wasn’t as simple a choice for him," she said, adding: "Addiction is an illness.”

The model’s new book, Christine McGuinness: A Beautiful Nightmare, is set for release later this month.

The TV personality heartbreakingly said that her dad’s drug problem began when she was just a one year old baby.

It wasn’t until she crawled over one of Johnny’s needles that her mum Joanne realised she needed to take Christine and her sister Billie-Jo away from the worrying environment.

The mum and daughters left Liverpool and finally settled in Merseyside, where Christine grew up.

Despite their difficult start and the disappointment she faced when he didn’t make it to walk her down the aisle at her wedding to Paddy, Christine has a close relationship with her dad Johnny and says she loves him.

Sadly, she made the tough decision not to allow him to meet her children as she doesn’t feel comfortable with them meeting and knowing a heroin addict.

It comes as the star recently shared her news about being diagnosed with autism, as her husband detected similar behaviours in her with their twins Penelope and Leo, who are also autistic.

Christine McGuinness: A Beautiful Nightmare is out 25 Nov and is available to pre-order now.

For all your latest updates on Christine McGuinness, sign up to OK!'s daily newsletter.