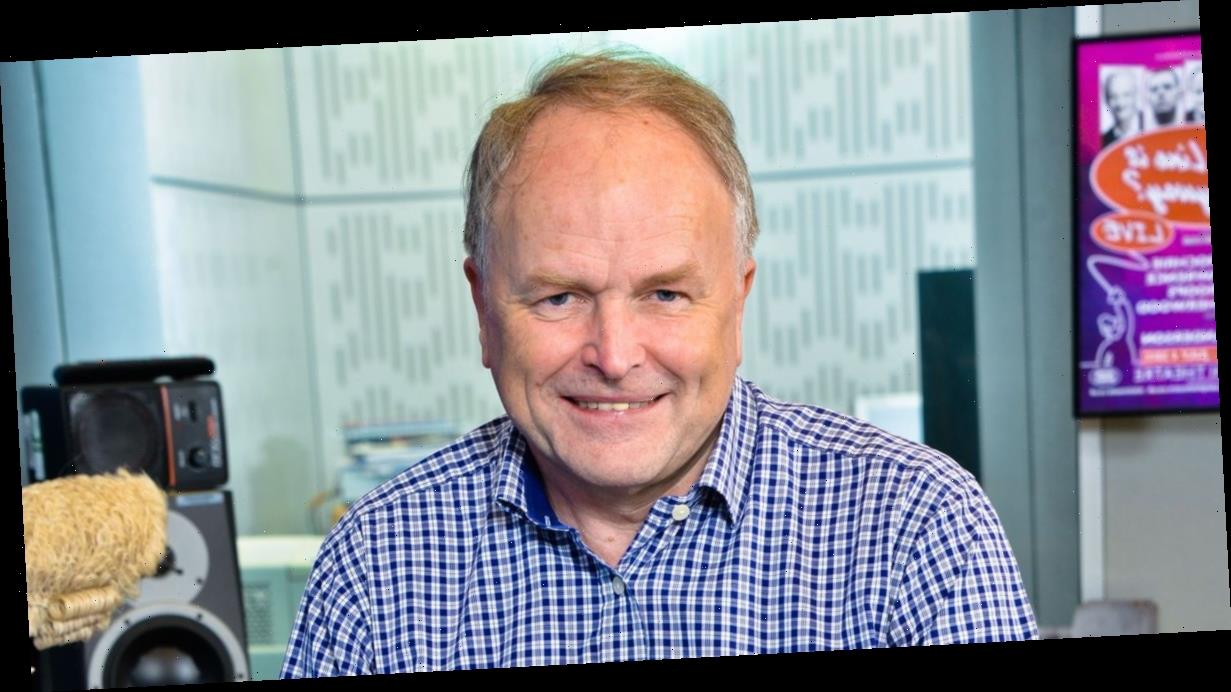 'These questions are my idea of hell! None of them I want to answer. I prefer waffling!’

Clive Anderson is shifting around in his seat in a rooftop bar near Broadcasting House.

Then he takes a swig from the glass in front of him and grimaces, ‘Urgh! Fizzy water from a warm glass! That’s a taste to be acquired.’

Luckily, he’s laughing. And while his words might suggest curmudgeonly agitation, the TV star is actually such witty, warm and self-deprecating company, it’s impossible not to be charmed.

Dressed in a checked shirt and navy trousers, ‘plucked from my snappy wardrobe of clothes,’ Clive has aged surprisingly little since his TV heyday in the 1990s.

Balding then, the chat show host doesn’t appear to have shed any more hair. ‘Oh I think I must have,’ he dismisses, smoothing his scalp. ‘But I’m on a slow burn.’

At 67, the talk show host could be forgiven for putting his feet up. Instead he’s taking a solo show, Me, Macbeth and I, on a nationwide tour.

Using the Bard’s Scottish play as a structure, Clive penned it and performs it himself. ‘It’s basically me standing up and talking about myself, with jokes,’ he explains.

‘I took it to the Edinburgh Festival last summer. There was a cutting edge, Russian version of Swan Lake with naked dancers… And then there was me, some old fart who used to be on telly.’

Once the darling of TV, former barrister Clive shot to fame in the late 80s as the anchor of popular improvisation show Whose Line Is It Anyway?

Then equally successful chat shows followed. Viewers adored Clive’s slightly awkward, fun-poking interview style. But not all the guests did. Famously, Barry Gibb of the Bee Gees walked off the set, upset at being branded a ‘to**er’ in a gag that misfired.

‘That was the interview where I most offended someone,’ admits Clive. ‘It was a bit of a hoo-ha’. There was also the time Virgin entrepreneur Richard Branson poured a glass of water over him.

‘It was nothing in particular I’d said,’ insists Clive. ‘He was having a bad time and in disputes with British Airways, I don’t know why he came on really – and I suspect he soon thought the same!

'I was teasing him about his business and his big teeth, nothing out of the ordinary, then he suddenly asked for a glass of water and promptly tipped it over my head.

‘When I read Branson’s memoirs, he said that he hated me sitting there with all this make-up plastered on my head to cover my baldness. But it wasn’t my decision to wear make-up on my head!

‘When you are on TV with my kind of colouring and hirsuteness they’re obsessed with stopping it shining, so they trowel on make-up!’

Before turning to showbiz, Clive was a criminal barrister for 15 years and admits that, now he has peers who are High Court judges, he sometimes questions his career swap.

‘I’ve done it the wrong way round. I should have done comedy first as TV is for young people. Whereas, to be a lawyer it’s good to be older and have gravitas.’

Clive has been happily married to Jane, an HIV specialist, since 1981. ‘She’s a distinguished doctor and professor. If I say so myself, she’s big news. She mostly has no interest in anyone famous. At least one of us has a proper job.

‘She’s the love of my life, but I have to say that!’ he grins. ‘It was like at first sight. We met as London flatmates, it was like The Young Ones , there were lots of pieces of furniture that didn’t work.

'I had two places to choose between to live in, and as I often say to my children, their whole existence relies on that one decision I made.

‘We married at 28, which seemed a perfectly ordinary age to get married at the time but these days seems young. Perhaps I would tell my younger self to go a bit crazier when it came to women.’ Then he cries, ‘Oh God, why have I been nudged into saying that!’

‘We get on well but we very rarely agree on anything. She’s the organiser. She’s an enthusiast and I’m a pessimist. It’s good to have that balance.’

The couple live in Highbury, north London, and have three adult children, Isabella, 30, Flora, 28, and Eddie, 26. ‘Isabella works at the V&A, Flora does stand-up comedy.

'I suppose I can take some credit for that, but I am reticent about advising her. Young people don’t want an old fart like me advising them. Eddie plays poker. An interesting career choice, but it generates money. With traditional parents – one lawyer and one doctor – I thought at least one of them would have a solid profession.’

Arsenal fan Clive happily walks to the Emirates Stadium from his house most weeks. And still enjoys a weekly kickabout himself with pals including Angus Deayton, David Baddiel and Hugh Dennis.

‘I get called a “goal hanger” but that’s only happened in later years, since I run around less. There’s a huge age range as we now have people’s sons playing. The young people run around and are skilful, they don’t fit in with the ethos of being rubbish, which I represent.’

Does getting older scare him?

‘I can cope with joints stiffening up, or less good eyesight, you don’t welcome those things but you know where you are.

'The most worrying concept about ageing is the idea of dementia. I’ve always had quite a bad memory, I’m terrible with names, so it’s hard for me to notice what’s dementia and what’s just me.’

He’s not tempted by offers of appearing on reality TV shows like Strictly . ‘I am pretty certain I wouldn’t win it but – I may have delusions of grandeur here – I don’t think I would be the worst.

Unless you win it, are comedy bad, or have an affair with a beautiful Russian dancer, you become completely unmemorable.’

So for now he’ll stick to performing, giving after-dinner talks, presenting radio show Loose Ends , and TV appearances. ‘I’m a nervous performer and assume I will be a disaster and I must do everything I can to avoid it.

'Some people are confident of their abilities, but I’m not. The good thing about being a pessimist is that I’m constantly pleasantly surprised by life. I don’t know how optimists keep going!’

Up with the lark or lazy lie-in? I’m always up early because of our dog, Albert, a terrier mix. By 6am he’s crossing his legs desperate to get outside.

Hungover or fresh as a daisy? I don’t get so many hangovers these days, I’m not sure whether that’s because I drink less or my body has become more attuned to it.

Fry-up or healthy breakfast? I like a fry-up, but my wife is a doctor, so it’s hard to sizzle away sausages while she’s munching on green grass and almonds.

Gym or yoga? I did yoga for a few years because I’m a tense sort of person and thought it would help. But the teacher would ask whether I’d been practising and I’d have to find a way of saying no, without actually saying no. I never improved.

Pub lunch or home-cooked roast? We normally do a roast at home. Jane cooks more than me, I’m not adventurous but I can roast a chicken and prepare some veg.

Newspapers or Netflix? I like reading a paper. The last thing I watched on Netflix was Cheer, a US documentary about cheerleading.

Beer or wine? With dinner I drink wine, but otherwise I like beer. I’m not averse to a glass of whisky. If I say I drink anything though it makes me sound like an alcoholic.

I couldn’t get through Sunday without… Finding out the football results.

– Clive Anderson: Me, Macbeth and I is on a UK tour from 13th March – 24th May. For tickets go to socomedy.co.uk