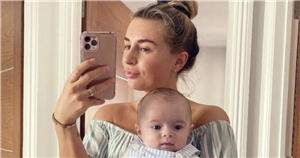 Dani Dyer’s hopes for a second baby may have been dashed as her boyfriend Sammy Kimmence has been sentenced to 40 months in prison.

Dani revealed in her most recent YouTube update that she wanted to have her second baby when her son Santiago – who was born in January – is “about two."

The star was giving an update on her life as a new mum when she went into detail about when she'd like another baby.

Dani said: "So many people say to me, ‘oh when do you think you’ll have your next baby?’ I’ll probably wait until Santi is about two. I don’t want to even plan these things.

"When I feel like I’m ready, I don’t want to rush it. People that have two babies under one, I reckon it’s amazing when they’re older as they’ll be like best friends, but it must be difficult. I feel like you can’t plan, I don’t think you can plan.”

The star continued: “I’m just loving being Santi’s mum at the minute and I’m enjoying just him growing up. I really just want to cherish these moments and not rush it.”

However, Dani’s plans may well have been shattered as her boyfriend Sammy has received a 3.5 year prison sentence.

Sammy has been jailed for 3.5 years for "despicably" scamming two pensioners out of almost £34,000 by posing as a financial advisor.

The 25 year old was sentenced on Wednesday at Portsmouth Crown Court, where the court heard how his actions left an RAF veteran "living on the breadline".

The court heard how Sammy's victims were legitimate clients of an investment company where he used to work, with him taking them on when the business stopped operating.

It was then that he falsely claimed to Peter Martin, 90, and Peter Haynes, 80, that he was authorised to provide financial services through his company S&S Trading Ltd, taking £33,919.

Kimmence pleaded guilty to five counts of fraud back in April,where the judge warned him that his offences were serious enough to cross the custody threshold and land him a prison sentence.

Sammy and Dani dated for a year before splitting shortly before she entered the Love Island villa in 2018.

While on the show, Dani met Jack Fincham and went on to win the £50,000 cash prize together. The pair remained together until April 2019, when they went their separate ways.

Dani rekindled her romance with Sammy weeks later and the couple welcomed baby Santiago in January 2021.

In April, Dani’s representative told The Sun Online she and Sammy, 24, are “still together” when asked if she was continuing to support him following his last-minute plea change.

For more showbiz updates and news about Dani, sign up to OK!s daily newsletter here.