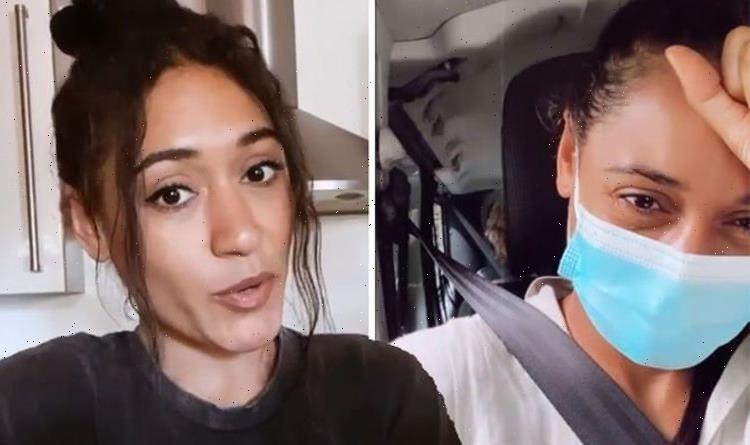 Josephine Jobert, 36 shared with her Instagram followers a setback she has had whilst filming the hit BBC drama Death in Paradise. She shared the news with her 93,000 followers.

She has been documenting her time filming the show on social media, keeping fans updated on every move.

On Tuesday (31 August) fans were startled when an incident occurred, delaying filming.

Josephine shared a video of her in a car on the way to set when out of nowhere, the road was blocked by a car and a truck.

She said: “On our way to set. Blocked on the road.”

The TV star then posted another video shortly afterwards, updating fans on the latest.

In the video, Josephine shows the car she was travelling in, trying to get through the hold-up, knocking passing trees over.

The actress can be seen smirking under her face mask in the video.

She captioned the video hilariously: “Everything is fine…”

Fans are delighted with Josephine’s constant updates whilst filming the hit show.

She started on the BBC series in its fourth season in 2015.

The star decided to leave the show for “personal and professional reasons” in 2019 before she returned for the show’s tenth series in 2021.

Fans have been over the moon since Josephine returned to the show, with the actress filling in the fans with the latest news.

The star had fans feeling nostalgic earlier in August when she rewatched old episodes of the show that featured comedian Ardal O’Hanlon.

Ardal played DI Jack Mooney, from season six to season nine, with the character leaving to return to London.

Josephine recently replied to a fan comment about the speculation of a relationship between her and co-star Ralf Little’s DI Neville Parker in the series.

She quickly replied: “Ahaha I love your imagination and enthusiasm.

“But, without spoiling anything, maybe a wedding would be a bit rushed, don’t you think?”

Death in Paradise blessed our screens from 2011 and has run for a strong 10 seasons so far.

On 7 January 2021, the BBC announced the show had been re-commissioned for another two series, with a Christmas episode also announced in July.