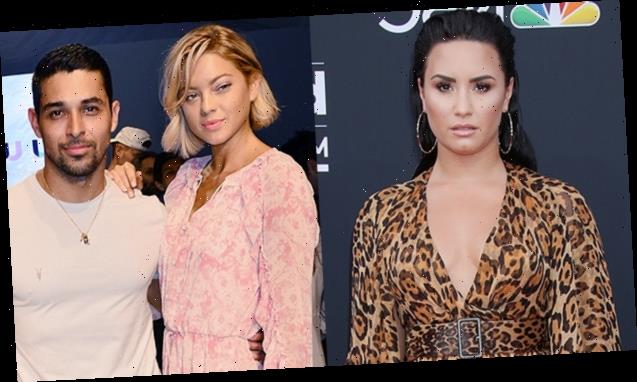 Demi Lovato appears to be tossing an Easter egg about ex Wilmer Valderrama’s engagement in her new music video for ‘I Love Me.’ She also seemingly addresses her near-fatal overdose.

Demi Lovato‘s uplifting new single and music video “I Love Me” drops at midnight on March 6. In a snippet from the vid obtained by TMZ that you can watch here, it appears she’s going to be looking back at her past and present in the self-empowerment themed jam. In one scene a bride and groom in their wedding attire run past her and she looks directly at them then gives an “over this!” stare. It seemingly could be a reference to her boyfriend of six years Wilmer Valderrama, 39, getting engaged to model Amanda Pacheco, 28, on New Year’s Day after eight months of dating.

It’s not the only reference to something personal in the video. In a street scene with dancers around her, an ambulance is parked. A woman is being wheeled into it by paramedics and Demi reaches down to touch her as she walks past. Demi herself was rushed to the hospital by EMT’s on July 24, 2018 after a near fatal overdose at her Hollywood Hills home. She spent a week in the hospital before going to rehab. While hospitalized at Cedars Sinai Medical Center in Los Angeles, Wilmer was photographed paying several visits to his ex, who he dated from 2010-2016.

Demi, 27, had admitted to falling off the wagon in her song “Sober,” which was released on June 21, 2018, a month before her overdose. Prior to that she had six years of sobriety under her belt. Now that she’s sober and healthy again, the singer has had quite a comeback in 2020. She released her first new single since her O.D., a self-reflection ballad titled “Anyone.” She performed the emotional song at the 2020 Grammys on Jan. 26 and got a standing ovation. A week later she flawlessly sang the National Anthem at Super Bowl LIV. Big stuff!

Now with her uplifting and empowering song “I Love Me,” she’s putting all of the drama of the past few years behind her and focusing on self-love and affirmation. Demi revealed in January 2020 that after rehab, she wasn’t sure if she’d even return to her musical career. “We didn’t know what was going to happen. We didn’t know how healthy I’d be when I left, it was a scary time in my life for sure,” she told Andy Cohen on SiriusXM’s Radio Andy on Jan. 30.

She also sat down with Zane Lowe on Apple Music’s Beats 1 in January and said that she is “really excited” for this new music. “I also have some stuff coming out with other people that’s really exciting. So it’s just, it’s going to be a big year and I feel the momentum, I feel the excitement and I’m ready for it,” Demi revealed about her comeback.