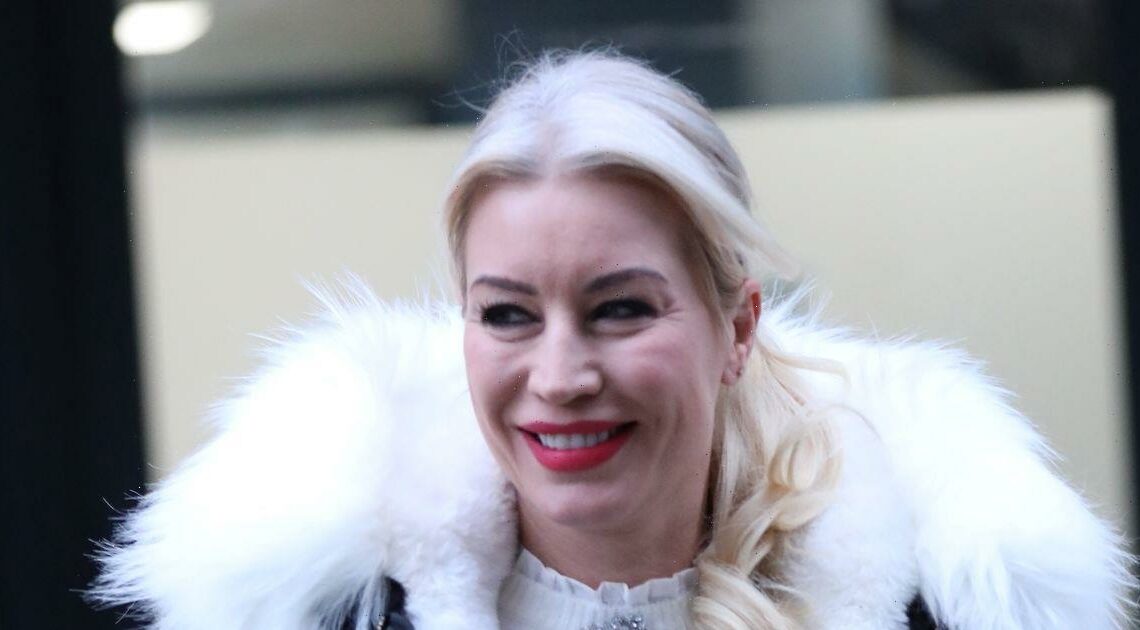 Denise Van Outen was spotted putting on a brave face when she was seen out and about for the first time following her split from Eddie Boxshall, and she was all-smiles and waving to fans.

The 47 year old TV presenter was engaged to her beau of seven years, also 47, before they decided to call it quits amid claims she had discovered he was sending secret messages to other women behind her back.

New snaps of the former Big Breakfast host showed her dressed to the nines in a stunning white fluffy jumper that featured a black bow and diamond buckle at the collar.

She paired the sweater with a red and black tartan mini skirt, and finished her look with a pair of black heels and a puffa jacket to keep warm as she departed Steph's Packed Lunch.

The TV personality's platinum blonde locks were styled into a wave and swept back into a ponytail for her outing. She also opted for pale foundation and dramatic smokey eye makeup, finishing off with a slick of red matte lipstick.

In one photo, the presenter grinned as she waved to onlookers.

While in another, she could be seen strolling across the road in London.

It comes after Denise confirmed she and former fiance Eddie had decided to break-up at the weekend.

Opening up to her fans on Instagram, the star acknowledged there had been a lot of speculation over her relationship and she had had to make the difficult decision to end things.

She shared a black and white photo of herself walking her two French Bulldog pups Tilly and Remy on the beach and began her caption: "Over the past couple of months, there has been much speculation regarding my relationship with Eddie.

"It saddens me to confirm that we are no longer a couple. I had to make the difficult decision not to continue in our relationship."

"I will always treasure the good times we spent together, and the memories made," Denise continued.

"We ask that you please respect our privacy at this time, especially for our children."

Denise's statement followed reports that she had allegedly found messages to other women on Eddie's phone while they were together.

"Denise is both ­furiously angry and utterly heartbroken," a source told The Sun. "It’s the very last thing she expected to happen after she had been so happy with Eddie.

"She thought this was forever. But while she has been out at work he’s been sat in her home betraying her trust," they claimed.

Mum-of-one Denise has daughter Betsy, 11, from her marriage to Lee Mead, while Eddie has two children from a previous relationship.

For all your latest updates on Denise Van Outen, sign up to OK!'s daily newsletter.