Home » Celebrities » Dr. Ranj takes HIV test LIVE on This Morning after It's a Sin success 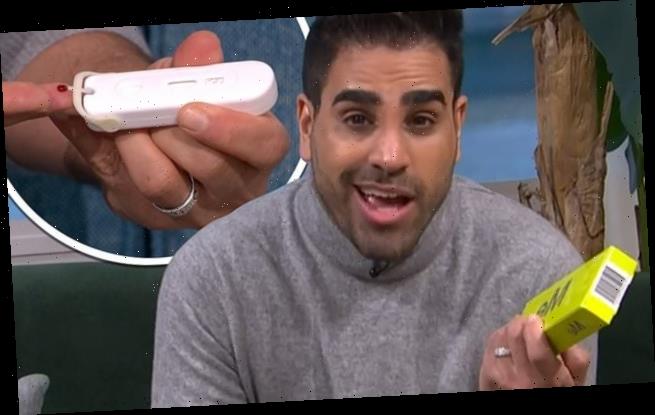 Dr. Ranj takes HIV test LIVE on This Morning after It's a Sin success

Dr. Ranj Singh takes a HIV test LIVE on This Morning after record number of people were inspired to get tested watching It’s A Sin

The TV doctor, 41, used a home-testing kit to perform the test on air as he showed how it is simply a case of pricking your finger and collecting blood in a vial.

The segment took place following a discussion with hosts Holly Willoughby and Phillip Schofield about the hugely popular TV series It’s A Sin, about the rise of HIV in the 1980s, and how things have changed since then. 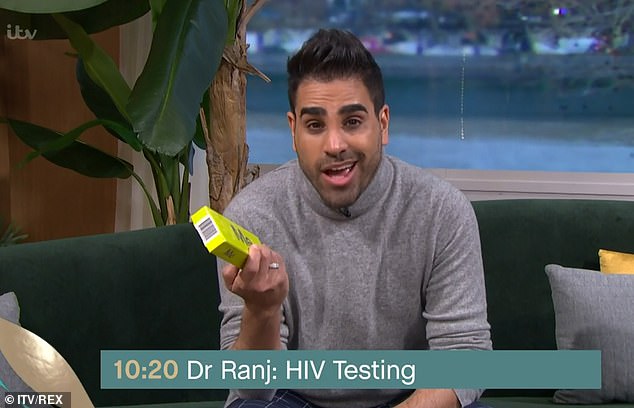 Home-testing kit: Dr. Ranj Singh underwent an HIV test live on This Morning on Tuesday following the upsurge in testing as a result of the success of Channel 4’s It’s A Sin

Dr. Ranj took the test to demonstrate to viewers that home-testing kits are now available to buy and said that with testing, HIV could be eradicated in the UK in less than 10 years.

Unlike the HIV/AIDS crisis of the 80s, medication is now available for those with HIV that means they can become ‘undetectable’, and can’t pass the virus on. 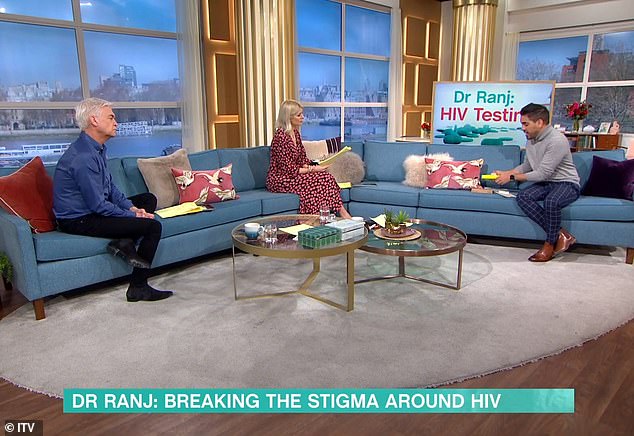 Demonstration: The TV doctor, 41, sat on the couch opposite Holly and Phil as he took the test to demonstrate to viewers that home-testing kits were now available to buy

Dr. Ranj explained that an early diagnosis of HIV along with ‘effective treatment’ allows people to live a ‘normal life’.

He sat on the This Morning couch opposite Holly and Phil and held up the set of in instructions that comes with the home-testing kit.

‘It gives you a result on the spot and it comes with a set of instructions,’ he said.

‘You just take the green bit off. Here’s a trick, a lot of people struggle getting enough blood out. 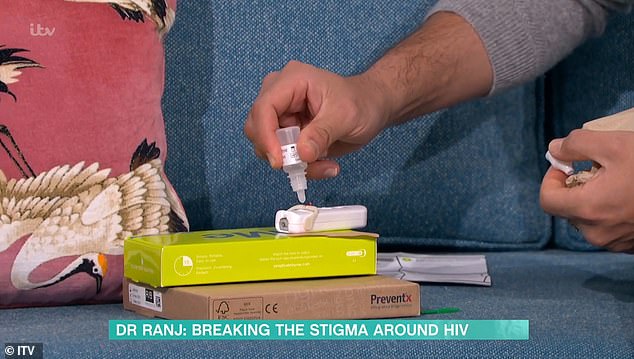 Breaking the stigma: He said that unlike the HIV/AIDS crisis of the 80s, medication is now available for those with HIV that means they can become ‘undetectable’, and can’t pass it on

‘The important this is to warm your hand up, put it in warm water. Milk the finger, get it nice and juicy, then you jab the end, like that.

‘Gradually give it a squeeze. There’s a nice little juice droplet there, catch it in this cartridge.

‘It is like a straw. Tip that over, four drops of this agent into the cartridge. Now let’s leave that for 30 seconds to a few minutes and then we should have a result.’

The doctor tested negative for HIV, however,  he told viewers if their test came back positive, they would need to go to a doctor to get it ‘formally confirmed’. 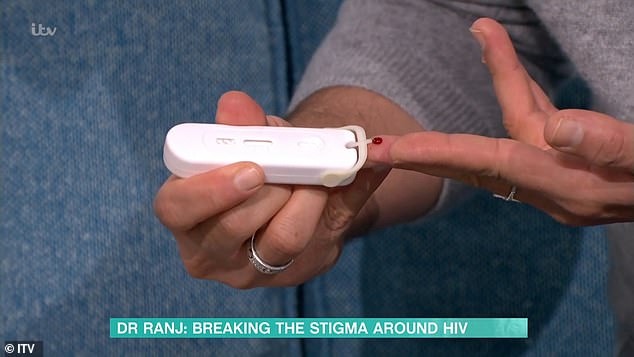 Simple! The medical doctor showed how the test is simply a case of pricking your finger and collecting blood in a vial

It comes as the show, It’s A Sin, has inspired a record number of people to get tested for HIV.

Starring Years & Years frontman Olly alongside a cast of rising stars and celebrated favourites including Keeley Hawes, Stephen Fry and Neil Patrick Harris, It’s a Sin has been universally praised by fans.

Russell T Davies, the writer and producer behind Queer As Folk, the 2005 revival of Doctor Who and Cucumber, loosely based It’s A Sin on his own experiences in the eighties. 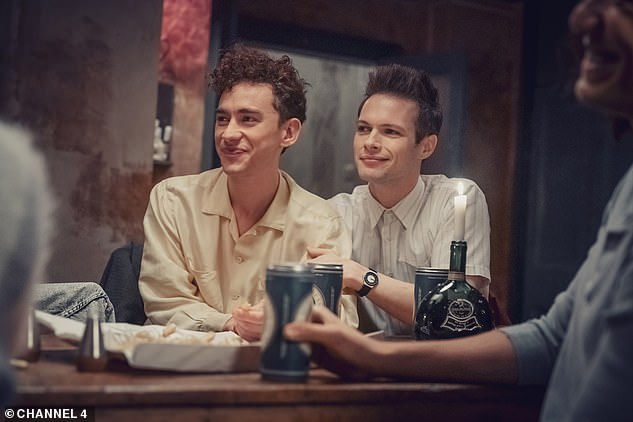 Popular: It comes as the show, It’s A Sin, has inspired a record number of people to get tested for HIV. Pictured: Olly Alexander and Nathaniel Hall in the popular TV show

The Terrence Higgins Trust told MailOnline on Friday: ‘There has been a surge in HIV test following the It’s A Sin effect.

‘This is the biggest ever National HIV Testing Week (1-7 Feb) with tests being ordered at a faster rate than we’ve ever seen before.

As a result, the Public Health England has released 10,000 additional HIV self-sampling tests due to demand to make sure tests continue to be available.’

They continued: ‘We’re calling it the ‘It’s A Sin’ effect, with people re-engaged in important discussions around HIV.

‘Testing is crucial for seeing the end of new HIV cases by 2030 – which is the goal we’re working hard to achieve.’

Prior to 1996, HIV was a death sentence. Then, ART (anti-retroviral therapy) was made, suppressing the virus, and meaning a person can live as long a life as anyone else, despite having HIV.

Information about HIV, other sexually transmitted infections and how to maintain good sexual health can be found out at https://www.tht.org.uk

HOW MANY PEOPLE HAVE IT?

HIV is a virus that damages the cells in the immune system and weakens the ability to fight infections and disease.

Without treatment, HIV can turn into AIDS (acquired immune deficiency syndrome), which is a syndrome (or, a set of symptoms) not a virus.

In layman’s terms, AIDS has been referred to as ‘late-stage HIV’. A person has AIDS when their immune system is too weak to fight off infections. AIDS cannot be transmitted from one person to another; HIV can.

WHAT IS THE PROGNOSIS?

Those diagnosed with HIV need to be on medication for life to prevent it turning into AIDS, which is often fatal.

A decade ago, people who were HIV positive were given a shorter life expectancy because the medication, suppressing the immune system, made patients highly vulnerable to fatal infections.

They allow for people who are HIV positive to live as long as anyone else in good health.

They can also suppress the viral load to such an extent that it is undetectable and untransmittable, meaning it’s possible to have intimate relationships without passing it on.

Who have David Schoen and Bruce Castor defended?