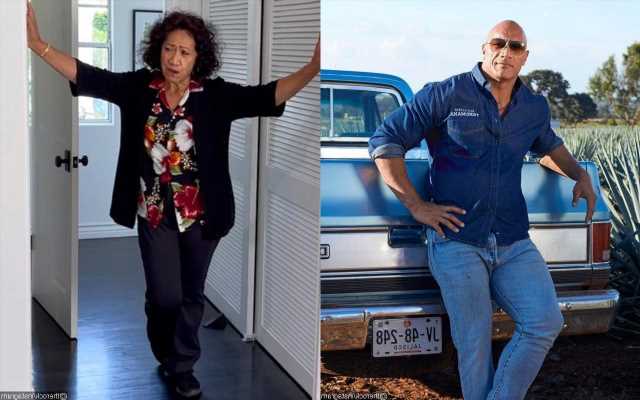 Sharing with fans how his mother reacted to his surprise for her, the ‘Jumanji: The Next Level’ star explains in the caption of his social media post why this very property is special.

AceShowbiz -Dwayne “The Rock” Johnson took pleasure in making his mother cry, but it was all for a good reason. On Saturday, June 4, the “Jumanji: The Next Level” star expressed his joy as he shared with the world his mother’s happy reaction when she checked out the new house he bought for her as a gift.

“Love you mom and surprise!” Dwayne wrote in the caption of an Instagram post that saw how he surprised his mother with the generous present. He went on explaining to his followers, “When I was a little boy, I hated when my mom would cry – These days, I’ll happily take her tears of joy. I surprised my mom and bought her a new home.”

In the short clip, the “Red Notice” actor took his mother, Ata Johnson, for a tour of the house. Starting from the front door of the renovated property, his mother moved on to see the inside that left her breathless and overjoyed. As she examined the surroundings, she could not help but fight her tears from falling.

Dwayne and his design team took 8 weeks to get the house ready. The Luke Hobbs of “The Fate of the Furious” explained in the caption, “Took me and my design team 8 weeks to get it ready, where she could walk thru her front door for the very first time and everything she saw was brand new and a total surprise.”

This house was not the first Dwayne purchased for his mother. The former professional wrestler revealed in the same caption that he has bought a few homes over the years. Elaborating on why this one was special, he stated, “She’s told me over and over these past few years, ‘After a lifetime of traveling, I want this home to be my last. Thats my dream.’ “

“I always say, if you got a good mom then you got a shot at becoming a good, caring human being,” the 50-year-old concluded his lengthy caption. Still, he added a small reminder at the end, “Let’s all give our mamas a big grateful squeeze this weekend and make ’em happy.”

Reba McEntire: Why a Family Vacation With Narvel Blackstock Left Her With a Lump in Her Throat