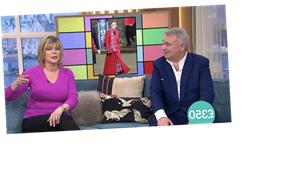 Eamonn Holmes has been accused of "fat-shaming" his wife Ruth Langsford while presenting ITV's This Morning show.

The 61 year old and his other half, 60, were playing It's Behind You with members of the public when he made a brutal jibe about Ruth's weight.

During the game, the Duchess of Cambridge Kate Middleton, 39, flashed up onto the screen as Eamonn and Ruth had to guess who the caller was describing.

Figuring out who it is, the TV presenter Eamonn turned to his wife and said: "She's very thin… Well it's not you darling." However, Ruth was quick to ignore his comments, focusing on getting the answer right as she said: "Are we allowed to get that? Married to Prince William. Kate Middleton!"

Eamonn, who recently shared the heartbreaking way his mum marked Valentine's Day 30 years after her husband's death, then laughed as he said: "He wouldn't say she's very thin and married to Eamonn Holmes, would he? No, wouldn't have done that!"

Outraged viewers flocked to Twitter to voice their anger over the remarks as one person wrote: "Imagine body shaming your wife on national telly".

Another said: "As if Eamonn Holmes just said to Ruth “well it’s not you then” when the clue was “she’s very thin” …. how bloody rude!! #ThisMorning @thismorning," followed by two pouting face emojis.

While a fourth added: "@EamonnHolmes that wasn't very nice what you said to Ruth about her weight #thismorning she's beautiful".

Although some were left unimpressed by Eamonn's behaviour on the show, many were delighted to see the pair back on their screens. Eamonn and Ruth, who recently received her coronavirus jab, are filling in for regular hosts Phillip Schofield, 58, and Holly Willoughby, 40, for the half term break.

The married couple used to present the hit ITV morning show every Friday, but were replaced by Alison Hammond, 46, and Dermot O'Leary, 47, earlier this year.

Fans of the show were quick to rush to social media to reveal their happiness at seeing the pair back on screens.

One viewer tweeted: "Looking forward to having @RuthieeL and @EamonnHolmes back on our tv this morning! Fridays aren’t the same without them!"

While a third told the duo: "Welcome back, we've missed you! Looking forward to watching this week…," alongside a thumbs up emoji.

Parler is back as app relaunches after being cut off by Amazon, Apple and Google – The Sun