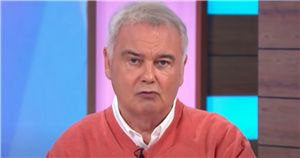 Eamonn Holmes thanked fans for their support in his struggle with long-term chronic pain, telling them he is finally on the mend.

The This Morning presenter sparked an outpouring of support earlier this year when he told fans he was in agony after suffering three slipped discs.

Taking to Twitter on Tuesday to update his one million followers, Eamonn wrote: "Another session of Physio rehab – feels like I'm making progress – slowly but surely."

He explained that he had been receiving treatment, which had been helping: "Chronic Pain now gone because of Steroid injections – Thank God. Got to strengthen my back now. Small steps , literally. but feeling positive.

"Thanks for sharing your stories."

Fans flocked under the 61 year old's post to send him well wishes, advice, and share anecdotes from their personal experiences.

One well-wisher wrote: "Keep going Eamonn your get there, you have the majority of the UK rooting for you. Cheers."

"Really glad to hear you're on the mend, Eamonn. Fantastic stuff!," another added.

Eamonn responded to a number of the comments under the tweet and told one person that he could now sleep easily, something he is "so thankful" for.

Just last month he appeared on Loose Women alongside his wife Ruth Langsford and admitted that he came to the show with crutches.

He said his injury would take up to a year to heal.

Eamonn revealed that he was told that the slipped discs were his fault, which he thought was bizarre and vehemently denied.

Speaking on the daytime talk show, he said: "My slipped discs are apparently my fault. I don't know how they're my fault, I don't even know how they happened.

"But I would say this, I think it's the fault of the people who designed chairs, who designed cars and there's so many things… beds too!"

The presenter first opened up about his struggle with chronic pains back in March when he tweeted a glum-faced selfie lying on a physio table.

In the tweet alongside the selfie, he wrote: "Starting the day by tackling the pain from the night before ….. On the Physio table. Chronic pain . Just can't get it to go away

"Sadly so many of you know the feeling. Thanks for sharing your stories. I'm determined to beat this …however much it hurts."

San Jose shooting victim helped others to safety, family says — plus what we know about 8 others killed
Recent Posts