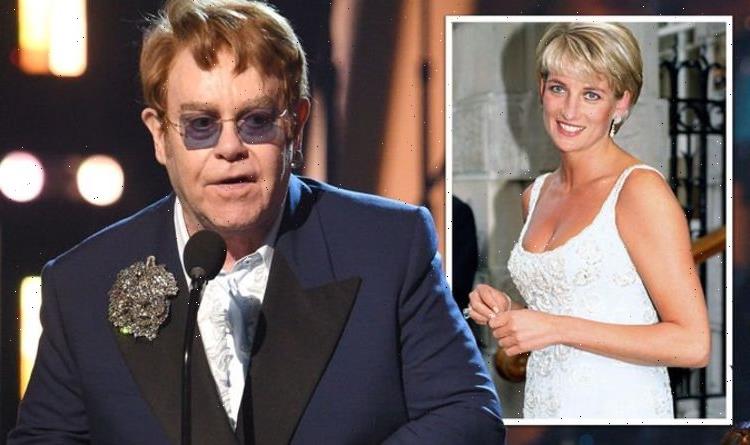 Sir Elton John was invited to attend an event in honour of Princess Diana this month to celebrate the life of the late royal and mark what would have been her 60th birthday. The celebration was due to take place earlier this year, but was postponed because of the coronavirus pandemic.

Prince William, Diana’s eldest son, invited the 74-year-old musician to the memorial, which is scheduled for October 19, along with 100 other guests.

It coincided with the unveiling of a new statue of the Princess of Wales, who died in 1997 at the age of 36.

Unfortunately Elton is reportedly no longer able to attend the party, as he is still recovering from a hip operation, which he underwent earlier this month.

The Candle in the Wind singer has already sent his apologies to the Royal Family, The Sun has reported.

A source told the publication: “Elton underwent hip replacement surgery at the start of the month.

“It went well and he is on the mend but is taking things slow.“

Express.co.uk has contacted a representative for Sir Elton for comment.

In September, Elton was forced to delay the European leg of his Farewell Yellow Brick Road tour until 2023 due to problems with his hip.

At the time, he took to Twitter to share a statement after falling on a “hard surface”.

“At the end of my summer break I fell awkwardly on a hard surface and have been in considerable pain and discomfort in my hip ever since.

“Despite intensive physio and specialist treatment, the pain has continued to get worse and is leading to increasing difficulties moving.

“I have been advised to have an operation as soon as possible to get me back to full fitness and make sure there are no long-term complications.

“I will be undertaking a program of intensive physiotherapy that will ensure a full recovery and a return to full mobility without pain,” he tweeted.

Earlier in the week, it was reported that Prince Harry will not attend the memorial party for his mother.

The Duke of Sussex, who flew over for the initial unveiling ceremony in the summer, will not return to the UK from his home in America for the event.

A spokesperson for the Duke and Duchess of Sussex confirmed to The Telegraph they would not be in attendance.

When the brothers unveiled the Ian Rank-Broadley designed statue, they released a joint statement.

“Today, on what would have been our Mother’s 60th birthday, we remember her love, strength and character – qualities that made her a force for good around the world, changing countless lives for the better.

“Every day, we wish she were still with us, and our hope is that this statue will be seen forever as a symbol of her life and her legacy.”

The memorial is situated in the sunken garden at Kensington Palace.

It shows Diana standing next to three children.