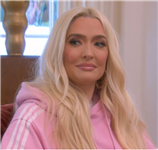 The Real Housewives of Beverly Hills once again turned into The Erika Jayne Show this week.

After being confronted last week by Sutton Stracke over her ongoing legal problems, and whether or not she had any role in her estranged husband’s embezzlement scheme, Jayne fired back on Wednesday night.

Sitting down with Kyle Richards and Lisa Rinna early on, Jayne reacted to Sutton’s previous remark about how she was basically embarrassed these days to have anything to do with Erika.

“How small town of her,” said Jayne in response.

“The ‘I don’t want to be associated with you because of what the neighbors may think,’ to me, is cowardice. It’s like, girl, come on.

“What are we in, small town Georgia?”

“We’re not in Augusta bitch, who the f–k cares!

“It has nothing, zero, negative to do with you Sutton.

“You think you have fear? What about my f—ing fear?”

For those just catching up… Jayne remains under investigation for allegedly helping her soon-to-be-ex-husband, Tom Girardi, steal money from his former legal clients.

There’s been talk that Jayne only filed for divorce late last year as a way to hide the assets the couple purchased with these embezzled funds.

Jayne may one day face charges for her involved in this scam.

But she has continually denied all knowledge of Tom’s reportedly illegal and disgusting actions.

On this latest installment, Jayne also touched again on how Tom cheated on her during their marriage… a lot.

She discovered this infidelity by checking her then-husband’s phone awhile back, but didn’t leave him right away.

“It’s been a really mental f— for a long time, it’s really hard,” explained Erika, who added she wanted to “make sure what I was seeing was what I thought I was seeing” and get herself into a better financial situation before leaving him behind.

She added to her friends:

“I still don’t have a prenup, but I don’t have one f—ing dime from him,” and she also said Tom would have “driven me into the f—ing ground” had she left sooner.

“You be quiet, ‘Miss Small Town, I’m Worried About My Reputation,’ you shut up,” Jayne yelled at Stracke.

“You can laugh all you want girl, I can go all day with you. Go get another motherf—ing legal opinion.”

Sutton appeared blindsided by the rant, telling Erika not to take out her own issues on her.

“My problems are my problems, don’t turn them around on me, they don’t affect you,” Erika fired back.

The Real Housewives of Beverly Hills airs Wednesdays at 8/7c on Bravo.

Where are the EastEnders kids now? A look back at the soap’s most memorable child stars and what they’re up to these days
Recent Posts