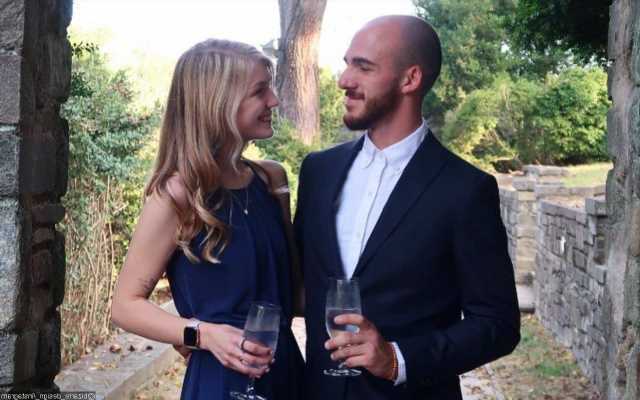 Meanwhile, the YouTuber and her fiance’s inner circle shares details about their alleged toxic relationship as one of their friends claim that ‘things weren’t 100% wonderful’ between the couple.

AceShowbiz -Federal arrest warrant for Brian Laundrie has been issued, two days after his fiance Gabrielle Petito a.k.a. Gabby Petito was confirmed dead. FBI Denver announced the update on its official Twitter account on Thursday, September 23.

“On September 22, 2021, the U.S. District Court of Wyoming issued a federal arrest warrant for Brian Christopher Laundrie pursuant to a Federal Grand Jury indictment related to Mr. Laundrie’s activities following the death of Gabrielle Petito,” the tweet read. In a follow up tweet, the FBI claimed that they will continue “to seek information from anyone who utilized the Spread Creek Dispersed Camping Area between Aug. 27-30, 2021, who may have had contact with Ms. Petito or Mr. Laundrie, or who may have seen their vehicle.”

The post also included a statement from Special Agent in Charge Michael Schneider. “While this warrant allows law enforcement to arrest Mr. Laundrie, the FBI and our partners across the country continue to investigate the facts and circumstances of Ms. Petito’s homicide. We urge individuals with knowledge of Mr. Laundrie’s role in this matter or his current whereabouts to contact the FBI,” the statement read. 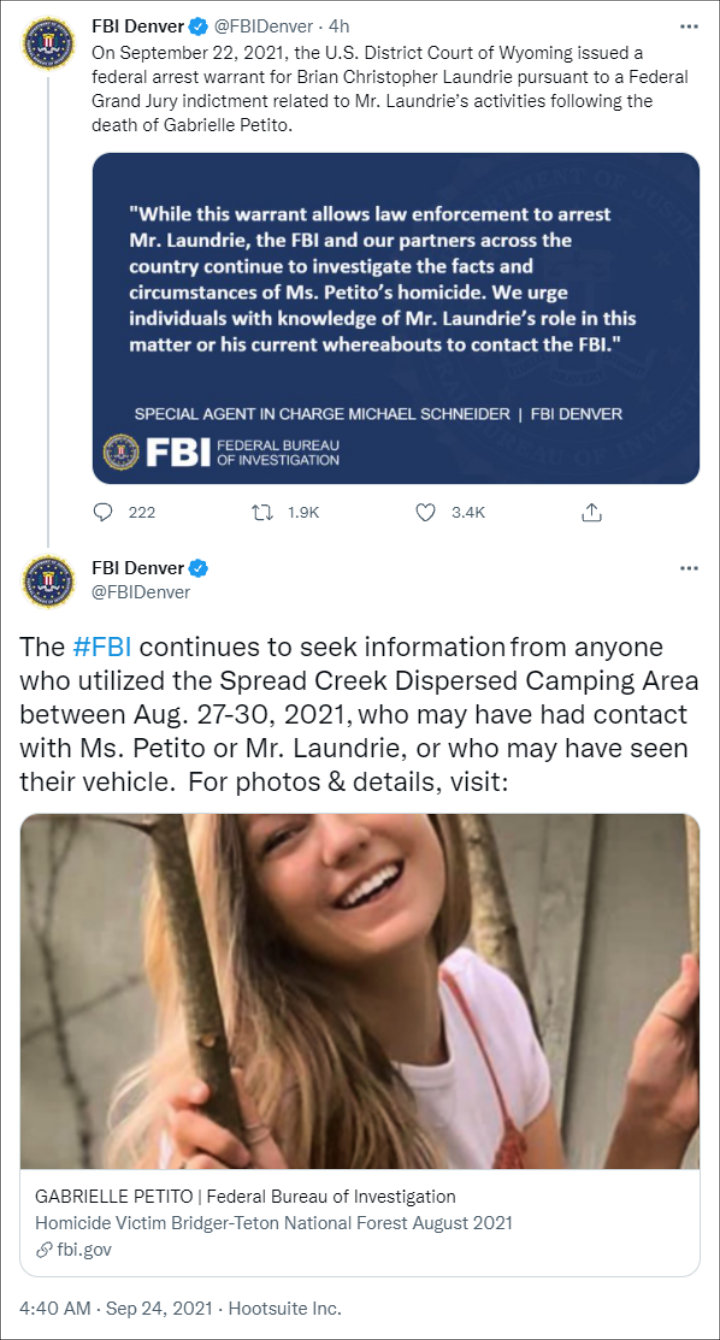 Federal arrest warrant for Brian Laundrie has been issued.

Meanwhile, the indictment, which was obtained by E! News, said that Laundrie “knowingly and with intent to defraud, used one or more unauthorized access devices” including a debit card and bank account between Aug. 30 and Sept. 1. By such conduct, the indictment claims Laundrie “obtained things of value aggregating to $1,000 or more during that period.”

After the arrest warrant was issued, Steve Bertolino, the Laundrie family attorney, issued a statement to the site, saying, “It is my understanding that the arrest warrant for Brian Laundrie is related to activities occurring after the death of Gabby Petito and not related to her actual demise.” The lawyer added, “The FBI is focusing on locating Brian and when that occurs the specifics of the charges covered under the indictment will be addressed in the proper forum.”

In related news, the YouTuber and Brian’s inner circle shared details about their alleged toxic relationship. Ben Matula, who knew the couple as teens in Long Island, New York, told PEOPLE that “things weren’t 100% wonderful” between them. “There was always something below the surface. One minute, they’d be all over each other, the next minute, he’d be like, ‘We’re fighting.’ They always had some drama,” Ben claimed.

Meanwhile, Petito’s friend Alyssa Chen, said, “They had times they were toxic and times where everything seemed a lot more healthy. They had very low lows and very high highs. But they really seemed to love each other.”

“When things were good, you’d be like, ‘Why can’t I have a relationship like that?’ When they were bad, you’d be like ‘Oh my God, just break up and spare yourself from the drama and everyone else from having to hear about it,’ ” Alyssa added.

Gabby was reported missing by her parents on September 11 as she was on a road trip with fiance Brian, who got back to the North Port, Fla. on September 1. Brian himself was missing his parents claiming they haven’t seen him since he went hiking in the nearby Carlton Reserve area on September 14.

Later on September 19, the Denver branch of the FBI, the National Park Service and law enforcement revealed in a press conference that a body was found in the vicinity of Spread Creek Dispersed Camping Area in the Bridger-Teton National Forest in Wyoming. On September 21, authorities confirmed that the body belong to Gabby and her manner of death was determined as homicide.

If I HADN'T seen my patient in person, he'd have died, writes DR SCURR