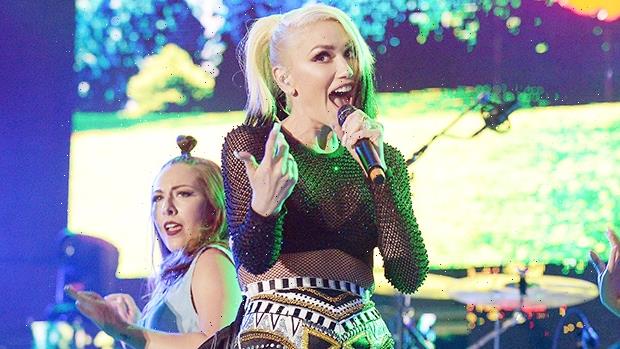 Gwen Stefani has stunned in a yellow plaid jacket with sparkly, black short shorts as she supported her husband Blake Shelton on tour in Ohio.

Blake Shelton, 45, and Gwen Stefani, 51, are a serious power couple! The “Hollaback Girl” singer supported her husband when he hit the stage for an August 25 concert at Bash on the Bay in Put-in-Bay, Ohio. The blonde beauty shared a series of selfies backstage, including a clip of Blake hitting the stage, and a sneak peek at his set list. It featuted a number of his biggest hits, along with the couple’s duets “Nobody But You” and “Happy Anywhere.”

“#honeymoon 🌙 tour w my @blakeshelton #ohio #happyanywhere #nobodybutyou gx,” Gwen captioned the post, which featured snaps of her rocking a yellow and red plaid jacket, which she paired with glittering black short shorts, a white crop top and bright orange bralette. She also donned her signature red lip, and styled her platinum blonde hair in sleek, straight tresses. The former No Doubt rocker previously surprised fans in July by joining her now-hubby onstage at the CMA Summer Jam in Nashville.

The newlyweds, who tied the knot back in July, exchanged vows in a backyard chapel on Blake’s Oklahoma ranch with a handful close friends and family members in attendance, including Gwen’s three sons, Kingston, 15, Zuma, 13, and Apollo, 7, whom she shares with ex Gavin Rossdale. Though 40 people were in attendance, there was one person fans were surprised to see didn’t get an invite: Adam Levine.

Blake opened up about the situation to Storme Warren on SiriusXM’s The Highway, explaining, “I’ve had awkward conversations with so many of my friends. ‘Oh, oh, yeah. I read about that. How was that?’ Listen, we kept it small, get over it. That’s not about you. So, there’s a lot of them,” he explained. He also revealed why he and Gwen decided to delay their honeymoon.

“We still are probably going to [go on a honeymoon]. We did have some time after the wedding, just she and I, but you know, we wanted something calm for a minute and not to run off and then go do something else … We just stayed there in Oklahoma and had some quiet time, just she and I.”

Woman claiming she was struggling in lockdown sent images of toddler

'I See Myself as Her Bodyguard': Beanie Feldstein on Playing Monica Lewinsky
Recent Posts