If you’re one of Halle Berry’s Instagram followers, chances are, you were at least low-key convinced she was married for a brief amount of time this weekend. If it makes you feel any better though, a whole bunch of celebrities were also accidentally duped by a two-photo gallery post Halle shared on her Insta.

Here’s how it went down: On Saturday, Halle decided to celebrate New Year’s Day by sharing some loved-up pics of her and her boyfriend, musician Van Hunt. This is a normal thing that people who are madly in love with someone do. NBD. The problem arose because the first picture in the gallery just happened to be of Halle and Van kissing at an altar in front of a huge, arched window that showcased the romantic AF tropical paradise they were visiting. And, in addition to being a very “wedding-y” pic in general, the caption read, “well…IT’S OFFICIAL!”

Those who took the time to swipe over to the second pic before commenting were treated an adorable selfie of the couple with “It’s 2022!” As in, “It’s official that it is now the year 2022!” 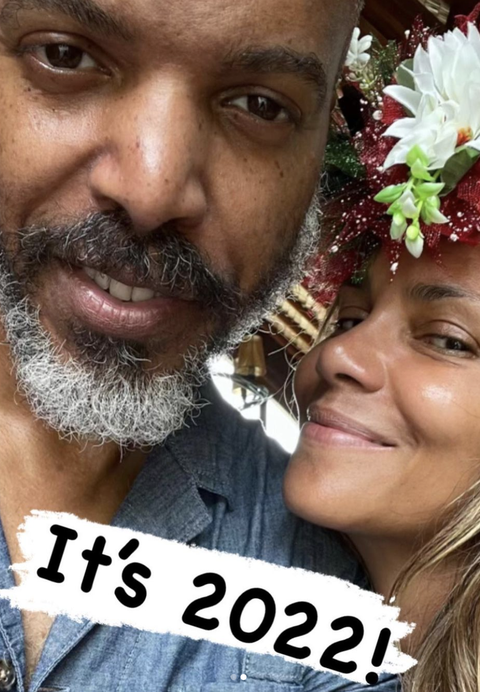 Several celebrities clearly did not catch the nuance though, and jumped into the comments to congratulate Halle and Van on the wedding that didn’t happen. According to Page Six, celebrities fooled by the post included Ava DuVernay, who commented, “Blessings, Queen! Wonderfulllll,” and Dwayne “The Rock” Johnson, who gushed, “Congrats you two!!! Beautiful!!” Octavia Spencer, Tia and Tamera Mowry, Naomi Campbell, Taraji P. Henson, and Questlove also left love for the appeared-to-be-newlyweds in the comments.

It doesn’t seem like this was an intention prank though, since Halle pinned a comment from filmmaker Oge Egbuonu that explained the mixup and encouraged people to scroll through to the second pic and then posted a followup IG clarifying the situation.

“We were just having some New Year’s Day fun! People clearly don’t swipe as much as we thought they did. 😂,” she wrote along with another selfie of her and Van. “Thank you for the well wishes, tho’, it really touched our hearts! Now it’s OFFICIAL, the internet is no longer undefeated 😜 #nomoreswipes4me #Januaryfoolsday.”