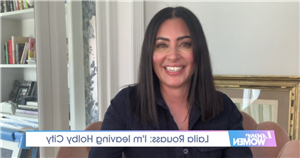 She has been playing Sahira Shah in the BBC series since February, her second stint in Holby where she played the same character from 2011 to 2012.

But talking about her latest storyline on Loose Women, which includes the suspicious death of her father Reyhan Shah (Raad Rawi) who had been involved in grooming activities, Laila dropped the bombshell that her time on the show was already up.

She said: “My father’s just had a cardiac arrest but they suspect that all is not what it seems, that his death is actually suspicious, and that’s where it’s left this week.

“Next week we find out if it was suspicious circumstances and who did it, and it’s actually – can I tell you my news?

“It’s my last week on Holby next week!”

Loose Women panellist Linda Robson asked: “Is it because you’re going to prison for murdering him?”

But Laila kept her cards close to her chest as she replied: “I can’t say! Trust you, Linda.”

The real-life footballers’ wives have been locked in a court battle over libel accusations with Coleen alleging that Rebekah leaked details of her personal life to tabloids, while Rebekah strongly denies the accusations.

It kicked off with Coleen posting a now-infamous tweet where she detailed the detective work she’d done to catch out the person who had been supplying stories about her, which ended “It’s…Rebekah Vardy’s account.”

However, Rebekah has said she knows nothing about the leaks and is suing Coleen for libel.

Laila starred as Amber in the tongue-in-cheek show in the early 2000s, where her character often got into spats with other wives including Tanya, played by Zoe Lucker.

She said: “The way that Vardy and Coleen are dealing with it, sorry, we would have just been at each other’s throats, there’d be none of this going to court and all of that.

“We would have dealt with it in the players lounge, woman to woman, pulled each other’s hair extensions out and it would have been done.”

YouTubers to Be Deported From Bali for Painting Fake Mask On