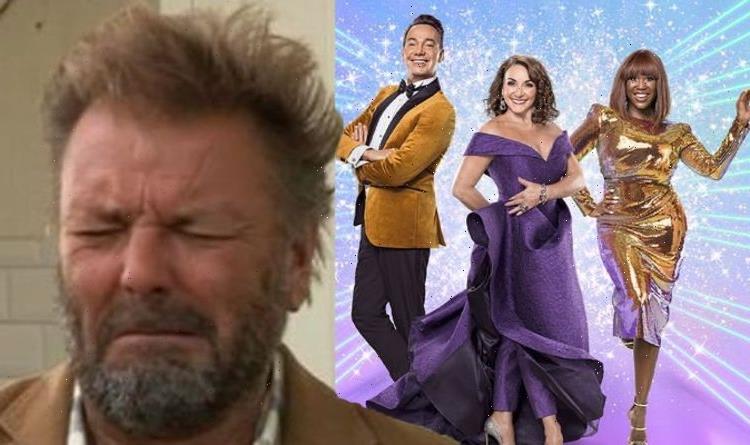 Martin Roberts, 58, has teased the possibility of wanting to take part in Strictly Come Dancing, however, they do not want him on the show, according to the Homes Under the Hammer star. The presenter revealed exclusively to Express.co.uk that he was “really keen” to put on his dancing shoes, but they would not take his calls.

They still wouldn’t allow me to do it.

Martin recently took part in Strictly: The Real Full Monty, where he stripped off in order to raise awareness for life-saving cancer checks.

He braved the challenge despite falling to pieces on the first day of filming after he lost his best friend Dave to bowel cancer.

Martin spoke about how ironic it was that he was taking part in the strip show.

“You know, I was really keen to try and do Strictly, but, you know, they wouldn’t even take my calls.

“So it’s very funny and ironic that I end up doing especially the Full Monty, so I don’t know if that means I will never do Strictly or maybe they’ll see that I can actually dance.

“But they still wouldn’t allow me to do it.”

The show was a huge success, being broadcasted Monday and Tuesday last week.

The performance, a 1940s-themed routine choreographed by Ashley Banjo in the iconic Blackpool Tower Ballroom, went perfectly despite the errors during the rehearsal.

At the very end, the men stripped to their pants and the ladies to their bras, with the men pulling off their pants at the end of the show.

Martin was very nervous for his ex “TV wife” Lucy Alexander to watch his striptease.

He said: “She was my screen wife and as you know we never consummated our relationship and funny enough she is one of the people I really don’t want her to watch.

“Only because I worked so closely with her, it’s like having your mum and dad watch? NO!

Lucy, however, was amazed by his performance and took to Twitter to tell Martin about the wonderful job he did.

In view of her 38,700 followers, she penned: “Wot STRIP I cannot tell you how much I’m LOVING watching my mate @TVMartinRobertson #StrictlyTheRealFullMonty. (sic)

“@AshleyBanjo you are an amazing host & I love watching your sincerity #itv.”

Martin and Lucy both joined the show in 2003, when it launched. However, Lucy left in 2016 to focus on other areas of her career.

She and Martin have stayed in contact, with the latter revealing he is keen for her to return to the show.

You can watch Homes Under the Hammer today on BBC One at 11.15am.

‘Thinks she knows everything!’ Sex And The City’s Patricia Field hits out at Cynthia Nixon
Recent Posts