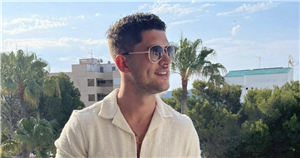 Jordan Davies – who rose to fame on Ibiza Weekender and Celebrity Big Brother – has spoken out about how he suffered mentally during lockdown.

The reality star and DJ, 29, told OK! he went into "quite a dark place" when he lost his summer work overnight due to the nation shutting down because of the coronavirus pandemic.

Jordan told us: "I found lockdown really tough. Being a DJ, I had an 80 gig tour last year for the summer of 2020. It was in Ibiza, Ayia Napa, Kavos.

"All of the party islands and I lost that work overnight.

"So I went into quite a dark place. I was drinking every day and stuff like that."

Jordan, who previously dated Megan McKenna, went on to share: "So I feel better now that we’re going back to normality a little bit.

"Obviously, people live in a lot worse situations than me. But I did find lockdown really tough."

The Big Brother favourite was then asked whether he would be open to doing I'm A Celeb at some point in the future.

Revealing he would jump at the opportunity, Jordan said: "If I had the chance to do I’m A Celebrity… Get Me Out Of Here! that would make my life complete."

"It’s still up in the air with COVID and we missed out last year."

He continued: "I know I said I left, but if the show had a big comeback, I’d love to go back and do it again one more time."

Fans of the ITV show were in tears when Jordan announced his decision to leave the show in the series' final episode.

The star broke down into tears when he said he would "love to stay" but added "he has to do what was right for him".

Now, Jordan has gone on to release his new single Undercover with producer Alfie Cridland, which is out Wednesday June 30.

Undercover by Alfie Cridland x Jordan Davies is out on June 30 on Perfect Havoc.

Slainte! Celtic Club buys an Irish pub – but it may not be home for long