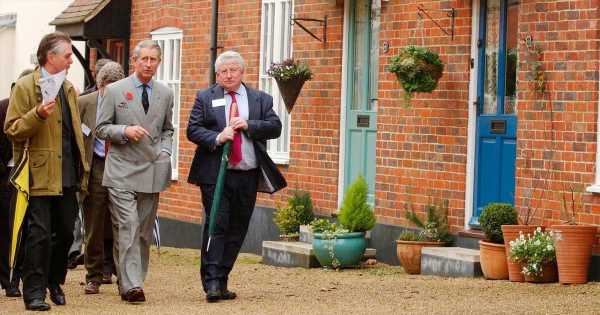 Poundbury is, literally, The Town That Prince Charles Built.

A new development, the first foundations of which were set down in 1993, it is HRH’s vision for a better Britain.

His aim was to create a community rather than a housing estate, somewhere providing a job for everyone and, with his eco-goals in mind, where walking is more important than driving.

After all, Charles has long been vocal over his dislike for new-build estates on the urban fringes, which require a car to pop to the shop for a loaf of bread.

The heir to the throne was hell-bent on building his own town against all the odds.

“Everybody was against it, I was told it was totally uneconomic. But I’ve gone on regardless of the endless criticism because I believed in it for the long term,” said Charles.

He never let the fact it’s been referred to as Dorset’s Disneyland, and, as one local said, “a bit of a Marmite place” get in his way. And it has paid off massively.

Accounts show Harry and Meghan still received funds from it in 2021, despite stepping down as front-line royals.

In fact, it has been producing a revenue for holders of the Princes of Wales title going back 700 years and owns farmland double the size of Greater London – most of it across the south west of England, including a whopping 70,000 acres of Dartmoor National Park.

Secrets Of The Royal Residences

This special collector's edition of OK! looks inside the hidden tunnels at Buckingham Palace, the spectacular gardens at Highgrove, the Cambridges' town and country retreats and the cosy Welsh bolthole loved by Charles and Camilla.

It explores exactly what it takes to run a royal household, with experts and former staff revealing how they prepare to host state dinners and celebrations.

Plus, discover the history and hauntings of the residences and how you can holiday on the royal estate.

You can purchase the special edition magazinehere for £4.99.

The project also owns some very random and varied buildings – Dartmoor Prison, a 1960s office block next to MI6 in London, the Oval cricket ground and, most bizarrely, a B&Q warehouse in, ironically, the kind of new town Charles rallies against, Milton Keynes.

Poundbury is said to contribute £20 million to the Duchy’s staggering wealth, totalling around £1 billion. It’s home to 3,500 people and growing; 40% of them are retired.

But what’s it like to live there? Residents observe the prince’s rules – no extensions, no satellite dishes, front door colours to be chosen from a selection of Prince Charles-approved hues.

They’re also banned from erecting walls or fences, putting house names or any other signs on the exterior of their homes, or parking caravans in the vicinity.

“When you come for the first time it feels like a film set and you can’t really believe anyone lives here,” commented one local.

And house prices are high, particularly for the region. When OK! scoured the property pages for the area, there was a penthouse suite for sale for a cool £1.7 million.

But it’s not just for the rich – Charles dictated that 35% of homes there must be available for the less well-off.

The social housing, rented to low-income tenants, is scattered among the more well-to-do dwellings, to avoid social divides.

Retirement properties are also on the more affordable scale for the area, with a one-bedroom flat costing roughly £100,000.

The locals sup their pints at The Duchess Of Cornwall – named lovingly after his wife and designed by her interior decorator sister – and The Poet Laureate, in honour of Ted Hughes.

Charles is such a fan he apparently has a private shrine to the late poet at Highgrove.

There’s also a market hall designed with columns in the shape of milk bottles, crooked streets, small market squares and, instead of a high street, the shops, cafés and restaurants are dotted around, seemingly randomly.

Do you love celebrities, fashion, home interiors and beauty? Then do not waste another minute of your time and sign up to our daily newsletter, where you will receive all that – and more – straight to your inbox at 5pm every day.

From exclusive at home tours, cleaning hacks, the latest in beauty trends – and of course, all the latest celebrity gossip, look no further.

Pop your email address in the box at the top of this article, and et voila! Enjoy

Keep up-to-date with all the very latest celebrity, health, beauty, parenting and entertainment news with the OK! app

Only select news that interests you by picking the topics you want to display on the app's homepage.

Go behind the scenes on your favourite OK! shoots, take a look inside your favourite star's homes and be introduced to their new babies before anyone else!

There is even a huge 2,000 square metre playground opening this spring.

“I like the cleanliness, tidiness, lack of rubbish; the sense of being in harmony with nature and a feeling of being “at home”, yet in an interesting and constantly evolving development founded on a vision,” says Poundbury resident Jim Potts.

And fellow local Kathie Curtis enjoys the sense of community.

“We love it. We’ve made so many friends,” says Kathie, who upped sticks from Gloucester. “People have moved into Poundbury from far away. There is no cliquey-ness – it is such a wonderful mix of people.”

There are two yearly royal “inspections” when Charles comes to ensure all is shipshape.

He also visited to unveil a statue of his dear granny by sculptor Philip Jackson in Queen Mother Square, the central hub of Poundbury, where there’s a Waitrose (handy for filling the fridge with Duchy Organics products) and buildings designed by Ben Pentreath, the architect and designer who transformed the interiors of William and Kate’s Anmer Hall.

And there’s more than one nod to the Queen Mother – many of the streets are named after racehorses she owned, and the retirement community Bowes Lyon Court is so called after her maiden name.

As you’d expect from our future king, there’s much focus on sustainability.

Each new property has a built-in bird box, and there’s a community orchard where local volunteers help maintain the apple trees, and look after the geese and ducks, as well as tend to bees and hens.

Plus, with beekeeping being a favourite pastime of the Prince of Wales, on the community farm there is a beehive producing honey.

There are electric-car charging points around the town, with all new houses now having provision to install a personal one, and there’s a plastic-free shop, Naked Brace, selling produce from nearby farms.

One hundred and eighty businesses are currently flourishing in Poundbury, including a chocolate factory and the headquarters of Dorset Cereals, providing around 2,500 jobs for the community.

And there’s plenty more to come – the town is less than half finished and the plan is for 6,000 people to live there eventually.

Ben Pentreath is managing the latest phase of housing. While he’s at it, maybe he can design a new Poundbury home for Kate and William, who will inherit the Duchy when Charles becomes King.

William is planning to run the empire in the same vein as his father but admits he’s “less interested in the architecture”.

So only time will tell what this means for the future of his father’s very own town.

Content taken from Secrets Of The Royal Residences, a special Royal edition of OK! magazine on sale here for £4.99.

For all your updates on the Queen, sign up to our daily OK! newsletter.