Home » Celebrities » Jenelle Evans: Y’all Are Stupid For Getting Covid Tests! Them Things Cause the Cancer! 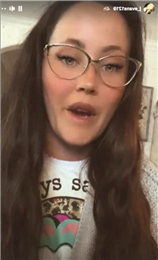 Jenelle Evans: Y’all Are Stupid For Getting Covid Tests! Them Things Cause the Cancer!

The Dunning-Krueger effect is the phenomenon in which people of low intelligence don’t realize how much they don’t know, and thus, tend to think that they’re much smarter than they actually are.

You may have noticed a lot of this sort of thing on social media over the past year, as your friends and family members transformed into experts on communicable diseases during the Covid crisis.

Thankfully, your aunt Karen has 43 Facebook friends, so she can only do so much damage with her bonkers conspiracy theories.

Jenelle Evans, on the other hand, has millions of followers, so when she ignorantly spreads misinformation it can be quite dangerous.

For much of the past week, Jenelle has been whining about being sick..

Now, despite this debilitating illness of hers, she flew to another state and attended her son’s kindergarten graduation, all while unmasked, of course.

Ms. Evans doesn’t strike us as one to tune into the nightly news every evening, but even she’s aware of the pesky little virus that’s killed a few million people in the past year.

So it shouldn’t have come as a surprise when her followers started suggesting to Jenelle that she get tested for Covid.

But apparently, Evans was taken aback by this response.

Jenelle responded by saying that she would not be getting a Covid test, because … reasons.

“Listen, whether you have Covid or not, there’s no medicine that can help you,” she said in one of her dumbest TikTok videos to date (which is really saying something).

Yeah, why bother figuring out what’s wrong with you! All illnesses are basically the same … right?

In case you forgot, Jenelle thinks Covid is a scam, and she refuses to wear masks or get vaccinated. Cool stuff.

In her own defense, Jenelle shared some clips from an account named @notcarolinaconservative.

Speaking from her car, this vaunted expert in field of epidemiology explained that Covid tests cause cancer. Seriously.

She claims that the test swabs are “saturated with ethylene oxide” a substance that’s known to cause “lymphoma and breast cancers.”

Jenelle, of course, knows a fellow genius when she sees one, so she commented, “Yeah…Idk about that test.”

Her clips garnered quite a few comments, and the word “idiot” was used liberally.

Yes, Jenelle received quite a bit of backlash from her followers who aren’t crazy about her sharing her foolish views about the largest public health crisis in any of our lifetimes.

“Thanks but I’ll get my information from professionals, not some random on TikTok. She’s such an idiot…..” one person wrote.

“She has a medical degree, y’all! She knows what’s up,” a second sarcastically added.

“It’s insane how people can be THIS f–king stupid. Like, seriously,” a third chimed in.

“She is so stupid,” a fourth observed.

“Thank you, Juhnelle MD. So happy she’s here to educate us,” a fifth hilariously quipped.

“I freaking hate her I just can’t anymore,” a sixth opined!

You get the idea.

It’s a shame that those Dunning and Kruger guys beat her to the punch.

If they hadn’t, the phenomenon of smooth-brained dummies thinking they’re smarter than everyone else could’ve been called Jenelle Evans Syndrome.