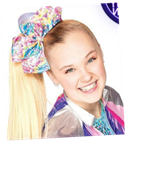 JoJo Siwa: I’ve Got a Girlfriend! And She’s Perfect!

As in, the former Dance Moms star says she’s a proud member of the LGBTQ community.

On Wednesday night, however, appearing as a guest opposite Jimmy Fallon, JoJo Siwa came out once again as gay.

This time, as in… she’s super duper happy.

Without revealing her name or any other information about her partner, Siwa told The Tonight Show host the following:

“I do have the most amazing, wonderful, perfect, most beautiful girlfriend in the whole world. It’s not something I’m ashamed of, I just haven’t shown the internet yet.'”

Siwa further explained that she recently made a TikTok with friends who are members of what is known as the “Pride House,’ a group of LGBTQ TikTok creators.

Before publishing the video, she stopped and realized for a moment that the footage might make her sexual orientation known to the world.

The Dance Moms alum said that she figured she was gonna have some fun with her fans before publicly addressing the rumors about her sexuality.

Therefore, Siwa went ahead and posted a TikTok of herself dancing to Lady Gaga’s “Born This Way.”

A few days later, she was inspired to officially confirm her status while on a FaceTime call with her girlfriend, who was the one who pushed Siwa her to share a photo of herself wearing a “Best Gay Cousin Ever” T-shirt.

Later in her chat with Fallon, Siwa said that she knew going public could be “a very scary thing.

However, she wanted to share her truth in an effort to help others going through a similar experience.

“And like I say, even if there’s a million people that don’t accept it, there’s a hundred million that do.”

Siwa, who previously received strong support from Abby Lee Miller, has thus far been an inspiration… to all.

“Right now, I’m super duper happy and I want to share everything with the world, but I also want to keep things in my life private until they are ready to be public,” she told followers a couple weeks ago.

“Right now what matters is that you guys know that no matter who you love, that it’s okay.

“It’s awesome and the world is there for you.”

“That it’s this really, really scary thing, but it’s not anymore.

‘There are so many accepting and loving people out there that it’s okay.”

Of course people are going to say it’s not normal, but nothing is normal.

That’s something we should never, ever be afraid of.

That’s something we should be proud of. … I’m the happiest I’ve ever been, that’s what matters.