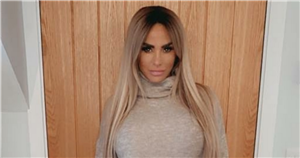 Katie Price considering jetting off for space after alleged assault

Katie Price is reportedly hoping to jet off for some "time and space" after she was allegedly assaulted last week.

The 43 year old has reportedly been receiving support from family and friends and is said to have been told there is "no rush" for her to return to work.

Katie, who's £50,000 engagement ring is said to have been stolen in the incident, recently said she was left "shocked" and "devastated" after the alleged incident.

Model Katie claimed she "ran away" after being punched while watching TV.

Now, after the man arrested on suspicion of the alleged assault, theft and coercive behaviour was released on bail, Katie is said to be getting stronger each day.

A source has told The Sun: "She’s been through hell.

"But her family and friends have rallied round and been amazing."

After pulling out of her first public appearance following the alleged incident, the insider close to Katie added: "Katie’s actually really proud of the decision she made not to attend the Awards show.

"In the past she might have jumped right back in but Katie is trying to be kind to herself and try to get her head round what’s happened.

"It’s been tough but day by day she is getting there now. Katie is strong and will come through this."

Mum-of-five Katie is now said to be hoping to get away on a trip abroad to help take her mind off the alleged ordeal.

The insider said: "Her management team have told her there’s no rush to return to work but Katie would like to get back to normal as quickly as she can and if she can get back to work for a bit next week she will.

"She’s also thinking about jetting off for a few days away next month to get some more time and space."

It comes after Katie spoke out about the alleged incident earlier this week.

She said: "I’ve got a big bruise, my face is all puffy, and I went to hospital. I’m still all dazed. I’m devastated. I’ve told police that I was assaulted, and am in shock that this happened."

Katie continued: "I ran away after being punched — I ran to Harvey’s house nearby and have now done damage to my feet, which I previously injured.

"I was just sitting there watching telly when the assault happened. I can’t say any more," she added.

Later, Essex Police confirmed the man arrested on suspicion of "assaulting" Katie Price had been released on bail.

A spokesperson for Essex Police told OK! on Tuesday 24 August: "A 32-year-old man arrested on suspicion of assault, theft and coercive and controlling behaviour has been released on bail until 20 September."

Stay up to date on all the latest Katie Price news and much more by signing up to OK!'s daily celebrity newsletter.