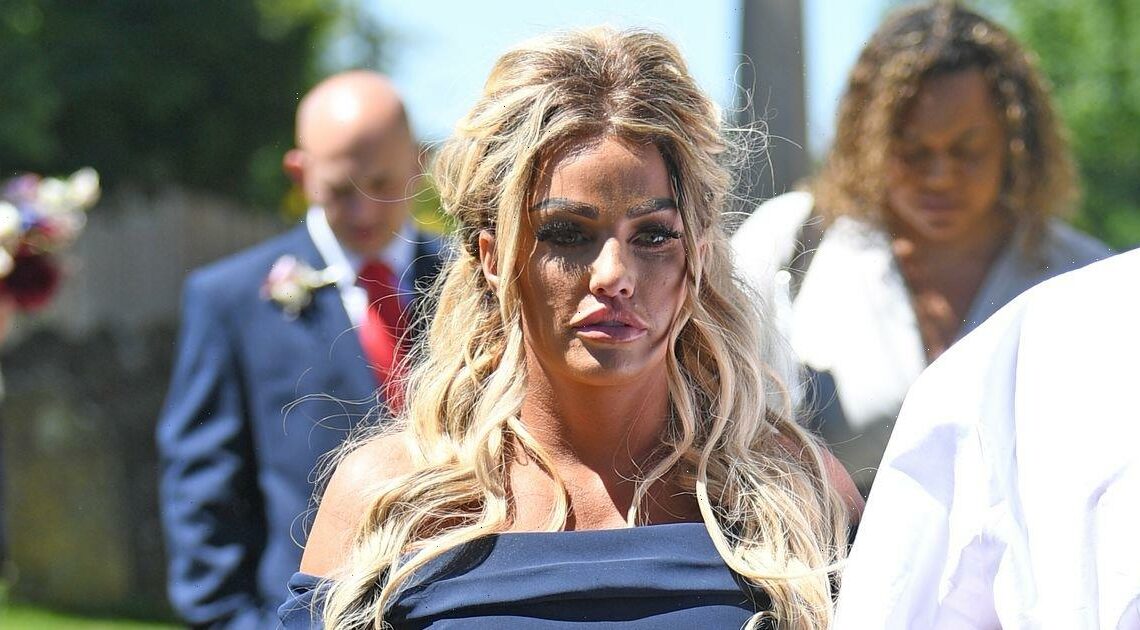 Katie Price was pictured in attendance at sister Sophie’s wedding ahead of her upcoming court sentencing.

The 44 year old reality star was joined by her five children – Harvey, 20, Junior, 17, Princess, 14, Jett, 8 and 7 – for the wedding of Sophie to her long time partner Harry, where the couple tied the knot at a beautiful church ceremony in East Sussex.

For the occasion, bridesmaid Katie wore a navy blue off-the-shoulder gown which came in a silk material and clutched a bunch of colourful flowers as part of her bridesmaid duties.

Completing the look, the former glamour model wore her long blonde locks in a half-up, half-down style and opted for a smokey eye and a nude pink lip.

Daughters Princess and Bunny wore similar blue dresses as they joined the bridal party alongside brothers Harvey and Junior.

Katie’s eldest son Harvey looked smart in a pair of dress shorts, a white t-shirt and a red tie, while Junior – who just followed in dad Peter Andre’s footsteps by releasing his first single – wore a dark suit with a similar red tie and shirt to his brother.

Youngest brother Jett, meanwhile, joined his brothers wearing a little suit, shirt and tie of his own.

Katie and Sophie’s mum Amy looked radiant as she sported a summery yellow floral maxi dress and accessorised the look with a trendy basket bag.

She was joined by partner Paul Price, who wore a smart grey suit and stayed close to the side of Amy as the pair arrived to watch their daughter get married.

Bride Sophie stunned in a simple yet elegant bridal gown, which featured long sleeves and a high neckline. She wore her hair in an up-do that was decorated with flowers and had a stunning floor length veil alongside her wedding dress.

Sophie’s big day comes amid Katie’s upcoming court date where she will be sentenced for breaching a restraining order.

The star will return to court on Friday June 24 for sentencing after pleading guilty in May to breaching a restraining order against her ex Kieran Hayler's fiancée Michelle Penticost.

The star could face a maximum sentence of up to five years in jail after admitting to the charge at Lewes Crown Court.

On 25 May this year, Judge Stephen Mooney told Katie: "Clearly you have accepted responsibility for an offence.

“You have pleaded guilty and you are aware that you committed that offence while you were subject to a suspended sentence and you are at risk of going to prison. “Your lawyer says there is a lot of information relating to the background of this offence and the offence which led to you receiving the suspended sentence. I will need to know about the relevant parts of the background.

“Be under no illusions, I am adjourning for a pre-sentence report but you do run the risk of receiving a custodial sentence.” Katie's lawyer Nicholas Hamblin said the star should avoid jail again because only the words “tell your” were a breach of the restraining order.

As previously reported, he said: “Were it not for those two words in the message this would not be a breach. It is very telling in this case that there is a great deal of background information which will need to be placed before the court.

“Much of it is in a therapist’s report and the court would need to be updated about her current situation and indeed the matters which have taken up so much of her time and other people’s time over quite a number of years.

“You will notice she has been subject to conditions of a suspended sentence. Part of my function will be to seek to persuade the court that in this case, because of the mitigation available it will be unjust to activate that suspended sentence.”

Sarah Hyland Keeps Her Hair Hydrated With This Tangle-Taming Mist