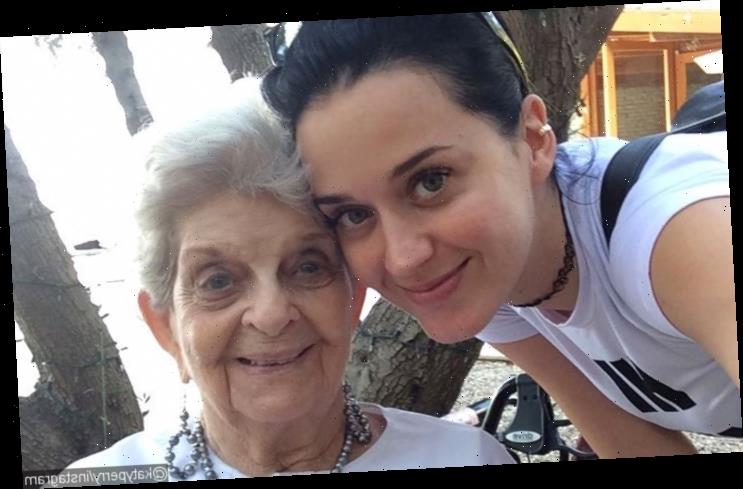 The ‘Never Worn White’ singer shares a video of her telling her ailing grandma Ann Pearl Hudson about her pregnancy before Ann’s passing, writing in the caption that she’s got a lot of her good traits from her.

AceShowbiz –Katy Perry has just lost one of her beloved family members. Days after announcing her pregnancy, the “Never Worn White” songstress shared a heartbreaking news that her grandmother Ann Pearl Hudson passed away at the age of 99 on Sunday, March 8.

Paying tribute to her late grandmother, the 35-year-old posted on Instagram a series of photos and videos that capture their happy time together. Among the pictures shared one displayed her fiance Orlando Bloom giving the elderly a kiss on cheek, and another saw the two of them posing with President Barack Obama. One particular video, meanwhile, documented the moment she informed her grandmother about her pregnancy.

“I don’t know when a soul enters a new vehicle but if there is an afterlife where there’s a waiting room of the coming and going my mind wonders if the soul that is waiting to come into my world is getting a kiss on the forehead from my sweet Grandma that departed this earth yesterday,” Perry wrote in the Monday, March 9 post. “My heart hopes so.”

“If she is able to speak with the soul in waiting the conversation would probably include ‘are sure you wanna pick this wild group?!’ There would most definitely be some sarcasm, a witty quip or two,” the hitmaker continued. “tbh grandma probably had a glass of her favorite blush wine ready upon arrival to this afterlife… and a most fashionable look, jewels included, naturally.”

The “Roar” hitmaker then described how her “fighter” grandmother has lived a full life. “She survived the Great Depression, raised 3 kids on her own as a seamstress, making G strings for showgirls and other such characters in Vegas,” she detailed. “She was always authentically herself, funny and full of all the sweet cozy things you think of when you think of grandmas … She was a wonderful grandma and I will forever carry some of her in me.”

Noting that she got a lot of her good traits and “stubbornness” from Hudson, Perry concluded her tribute with a hope that her grandmother would “rest in deep peace and kiss the forehead of the soul to come and let them know everything is gonna be OK, especially now that they have gained an angel to look over them.”