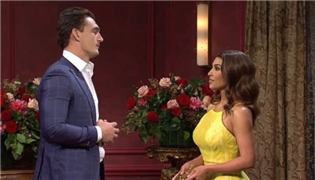 Even if you gave up on the show around the time that Will Ferrell moved on to better things, you’re still probably aware that Kim Kardashian hosted Saturday Night Live last week.

Social media was abuzz with both good and bad reviews of her performance, with some praising Kim’s monologue, while others roasted her for her wooden delivery in sketches.

In case you missed it and steered clear of all the feedback, one sketch in particular caught the public’s attention.

And it wasn’t because of Kim’s comic timing.

No, this sketch stood out because of Mrs. Kardashian-West’s chemistry with one of her co-stars.

The premise was simple:

Kim played the lead on a Bachelorette-like dating show, and she was presiding over a rose ceremony for her final six contestants.

The joke was that despite the fact that he was competing with an array of celebrities such Blake Griffin and John Cena, an overly-confident nerd played by Kyle Mooney was certain that he would be moving on to the next round.

Not exactly the most inventive (or funny) sketch, but this is still SNL we’re talking about.

One of the eligible hunks was played by Tyler Cameron from Hannah Brown’s season of The Bachelorette.

And the five seconds that they were on screen together was enough for fans to know that they wanted to see more.

“So I did a thing last night… so much fun joining Kim on her big night on SNL! Being vulnerable pays off! See you in the hot tub,” Cameron wrote on Instagram the morning after his surprise appearance.

As Cosmo reports, fans of Kim’s and of Tyler’s — two groups that previously had little interaction with each other — joined forces in eagerly shipping this potential couple.

“I ship a Tyler C + Kim K romance,” another added.

“You guys would quite literally make the hottest couple!” a third chimed.

“I’m so here for tydashian,” tweeted a fifth user, who’s not quite up on the rules of celeb couple names.

(First name plus lasy name? That is simply not how things are done!)

And one fan really went there like no one else, tweeting:

“You guys would make cute babies.”

Of course, the connection between these two goes deeper than co-starring on a crappy SNL sketch.

As you may recall, Tyler dated Gigi Hadid shortly after he was dismissed by Hannah Brown.

Hadid is close friends with Kim’s sister, Kendall Jenner, so it’s possible that these two crossed paths before their recent collab at Rockefeller Center.

Of course, that doesn’t make it any more likely that they’re dating or are planning to start dating anytime soon.

Kim is a 40-year-old billionaire with four kids and several businesses to run in LA.

Tyler is a 28-year-old New York City-based model who doesn’t seem to have a ton of interest in settling down.

We’re not saying it would be impossible for these two to make a relationship work, but Tyler’s probably not quite what Kim is looking for at the moment.

Now, Kim and Van Jones, on the other hand — that’s a shippable power couple!

Virgin launches US flights sale – with New York from £311pp