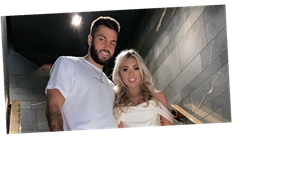 Former Love Island castmembers Callum Jones, Molly Smith, Priscilla Anyabu and Mike Boateng all got together to discuss their worst roommates, who was the biggest drama queen and who they thought will break up first.

The foursome, who all missed out on the the 2020 winter finale, discussed how Finn Tapp was the worst person to live with because he snored so much and kept everyone awake.

Finn managed to redeem himself by being voted the 'most loyal' islander, but runner-up Siânnise Fudge was thrown under the bus by the gang saying she was the biggest 'drama queen' and the 'messiest'.

Gathering around a fake fire pit Molly was the first to brand Finn, 20, the worst person to live with, saying: "Because he snored so much!"

Mike and Priscilla nodded, but Callum threw in his former bedmate Jess Gale in for good measure: "I would say Jess, I shared a bed with her for three days and within a few minutes she would be like [snore]."

Looks like winner Paige Turley will need earplugs to get some shuteye if her friends' stories are anything to go by when she and Finn eventually move in together.

The group also discussed their untidy housemates and pointed the finger at Siânnise: "Her wardrobe… and she never did the dishes. She got away with it so well!"

Callum laughed about her drama queen status: "Yes she was… she just couldn't cook… everything was a problem."

They even said that Luke Mabbott and Demi Jones would be the first to break up out of the final three: "I would say Luke and Demi but just because of distance," Callum added.

The secrets from the villa come as runners-up Siânnise and her boyfriend Luke Trotman shared their plans to move in together.

They are hoping to move to somewhere mutually convenient like Windsor: “I’m from Luton and Siânnise is from Bristol. We’re thinking we’ll move to wherever is in the middle,” Luke admitted.

And Paige and Finn have been out and about looking more loved-up than ever as they enjoyed a day in London together on Wednesday following their first date in the capital. Love Island: What are the old islanders like Rykard Jenkins and Jess Hayes up to now?

The couple, who were crowned as the winners of the ITV dating show , looked smitten as they cosied up in the wet weather in the capital.

Earlier in the week Paige had gushed about her evening with her boyfriend to Hakkasan for dinner and even teased her fans about the special date 29 February, as it is often tradition on a Leap Year that a woman proposes.

Meanwhile Finn posted a snap of his other half at dinner, who wore a stunning corset style-white dress and matching stiletto heels, writing simply underneath: "Unreal."