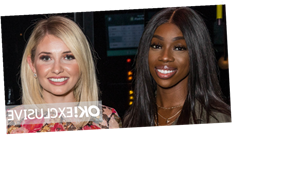 After 23-year-old Lucie claimed Yewande, 26, had "bullied" her in a series of old Instagram comments, the Irish beauty hit back, saying: "You refused to call me by my name because it was too “hard to pronounce” now you wanna say I bullied you !! Bullied” followed by an angry face emoji.

The star was supported by her fellow Love Island pals Amber Gill, 23, and 28 year old Amy, who appeared to quote Lucie as she wrote: “‘Is there really NOTHING else I can call you?’” She then added a GIF showing Joey from Friends mispronouncing French words when trying to learn the language from Phoebe.

The blonde later told her followers: “My final thought of the evening, this beautiful,respectful QUEEN has sat on this for almost two years.

"We haven’t spoken about it publicly because it was Yewande’s story to tell. I remember dates, times, locations of every conversation in that villa. There’s so much you don’t see x”.

Now, Amy has spoken exclusively to OK! Online about the ordeal, explaining that she thought it was incredibly "brave" for Yewande to speak out.

"I don't want to reignite it all because it's not my argument. But obviously over the last year, from Black Lives Matter we've learned a lot. I have learned a lot about racism and institutionalised racism… Silence is compliance and silence is violence," she started.

Amy then addressed the feud between Yewande and Lucie and the role she had to play in it as she continued: "I have always known this story and we have always talked about it when we've been us.

"When we sort of recall things from the villa, that does come up quite a lot because you think at the time we were all very like, 'That's not okay'."

Insisting that it is not her story to tell, she went on: "I haven't publicly talked about it so then when Yewande was brave enough to stand up and say, 'Actually, it's not okay,' then that was my point to say, 'I saw this happen, I called it out at the time, it's not been my story to tell…'

"Yewande has been very gracious, I think, in not bringing it up. She only brought it up now that she's been provoked. Yewande has gone on to use her platform for so many amazing things.

"She did an article talking about how for anyone else it would be a one off thing, but for her, it's so deep rooted in who she is because it's happened time and time again from when she was a child."

Yewande wrote an article for the Independent explaining why her name is important and how "pronouncing it correctly is key to my identity" in January this year.

Amy continued: "So to us, we saw it happen once, but to Yewande it's happened so many times that it is a thing that she needs to raise awareness of."

The reality star, who recently said she and ex Curtis Pritchard "check up on each other", went on to confess that before being friends with either Yewande or Amber, she "probably wouldn't have thought about" issues like this and described the two women as her "mentors".

"I'm so lucky that I have, in her, and in Amber, the best teachers to be a better person and to be a more thoughtful person in things that I wouldn't necessarily realise.

"I'm so lucky to have them as my mentors to learn to be a better person everyday," she concluded.

Serena Williams Had 'This Sense' About Alexis Ohanian Sr. Being The One