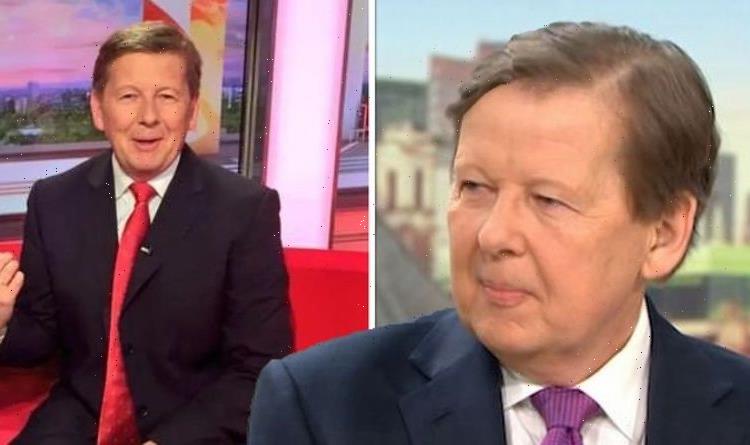 Bill Turnbull, 65, has shared his well wishes to one of his colleagues at Good Morning Britain. The former BBC Breakfast broadcaster posted in response to the news that GMB director Erron Gordon was stepping down after 13 years.

Bill has been known for hosting a number of stints on GMB, with his latest coming earlier this year.

Therefore, when the show’s director announced he was stepping down from the show, the broadcaster was among those paying tribute.

Posting in response to the news, Bill typed: “Didn’t get to work with you much, Erron, but enough to know you’re a top bloke.

“You always made us feel safe.

“Up there with the best of them. Good luck, pal,” he added.

“After 13 years at @ITV and 7 as the Series Director of @GMB I am leaving the programme at the end of the year to take on an exciting new challenge.

“’I’ve had an amazing time working with a brilliant team in front of and behind the camera and I am so proud of the programme I helped launch in 2014.

“Not forgetting somehow getting a part in Bridget Jones Baby!”

Erron then issued thanks to some of his co-workers in particular at ITV.

“The formidable studio crews that make me look good each day and our fabulous on air team.

“I’m looking forward to the next chapter and a lie in!” he finished.

Bill was one of many singing the praises of Erron as he exited the show.

Susanna Reid posted: “Our talented Director @errongordon is so good that when Renee Zellweger needed to cast a TV Director in Bridget Jones 3 she picked him.

“He’s been with @gmb since the start. He’s the best in the business.

“Congratulations on your new job Erron – we’ll miss you.”

Ex-presenter Piers Morgan also couldn’t resist weighing in as he praised the director.

He penned: “The very best TV directors thrive off unpredictability, spontaneity & flying by the seat of their pants.

“Loved working with Erron because the more I tried to trip him up, the more he enjoyed it.

Erron’s future colleague at Sky News also shared their excitement about the news.

Beth Rigby replied: “Great news for us. Very excited about working with you @errongordon.”