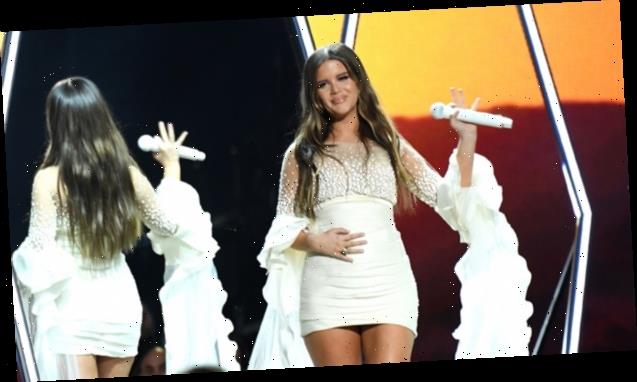 Maren Morris brought the house down at Houston Rodeo when she performed while nine months pregnant, and we officially feel like underachievers!

Country singer Maren Morris is absolute goals! The 29-year-old took the stage at Houston Rodeo on March 7, bringing the house down — oh, and she did it while NINE months pregnant. The mom-to-be belted out hits like “80s Mercedes” and “The Bones” in a bedazzled, skintight jumpsuit and made it look effortless. She took to Instagram after the performance to show her 1.3 million followers that she made it through without going into labor. “That’s a wrap, Texas,” she captioned the pic, along with the hashtag, “#9monthsAndDidTheFreakingRodeo.” She posed by a private jet in her glittering jumpsuit which featured a plunging neckline. She accessorized with a belt covered in rhinestones, and silver sequined boots while she styled her brunette hair in soft, romantic waves. Maren also held a massive Whataburger tote bag and cradled her baby bump while posing for the post-rodeo snap. Did we mention we feel like underachievers?

Famous friends were quick to comment on Maren’s incredible feat. “I’ll repeat myself, 9 months pregnant, performing at a rodeo, in Texas, with full make up and hair is the stuff country music was founded on…..This is the big league stuff, that only legends do,” Jamie Lynn Spears, the younger sis of Britney Spears commented. A fan who was in the audience also remarked that Maren’s massive baby bump had no bearing on the quality of her performance. “Even at 9 months pregnant she did not fail to hit every single note,” the Twitter user wrote. While on stage, Maren even cracked a joke about her baby boy potentially wanting to be born in her home state. “If I go into labor during this show, it’s all good because it just means that my kid really wanted to be born in Texas,” the “I Could Use a Love Song” songstress reportedly quipped.

The news, which is very fitting given today is International Women’s Day, comes less than five months after Maren revealed she would be giving birth to her first baby, with fellow country singer husband Ryan Hurd. In Oct. 2019, she posted a photo of herself clutching her bare, growing baby bump while sheathed in nude-colored sheer fabric. Ryan lovingly leans into her in the beautiful pic. “The irony is just too rich that after a year of living in the ‘GIRL’ headspace, the universe would give us a baby boy to even things out. See you in 2020, little one,” she captioned the photo. Maren is referring smash 2019 album Girl, which took home Album of the Year at the 2019 Country Music Awards.

Maren and Ryan, 32, began dating in 2015 after first meeting during a songwriting session two years prior. They became engaged in July of 2017 and tied the knot in a fairytale Nashville ceremony on March 24, 2018. With Maren’s incredibly successful 2019 work commitments behind her, it’s the perfect time for the couple to start their family. In addition to her album and world tour, Maren made her Coachella debut in April, performing her monster pop hit “The Middle” during collaborator Zedd‘s headlining set. We can’t wait to watch her thrive in 2020!