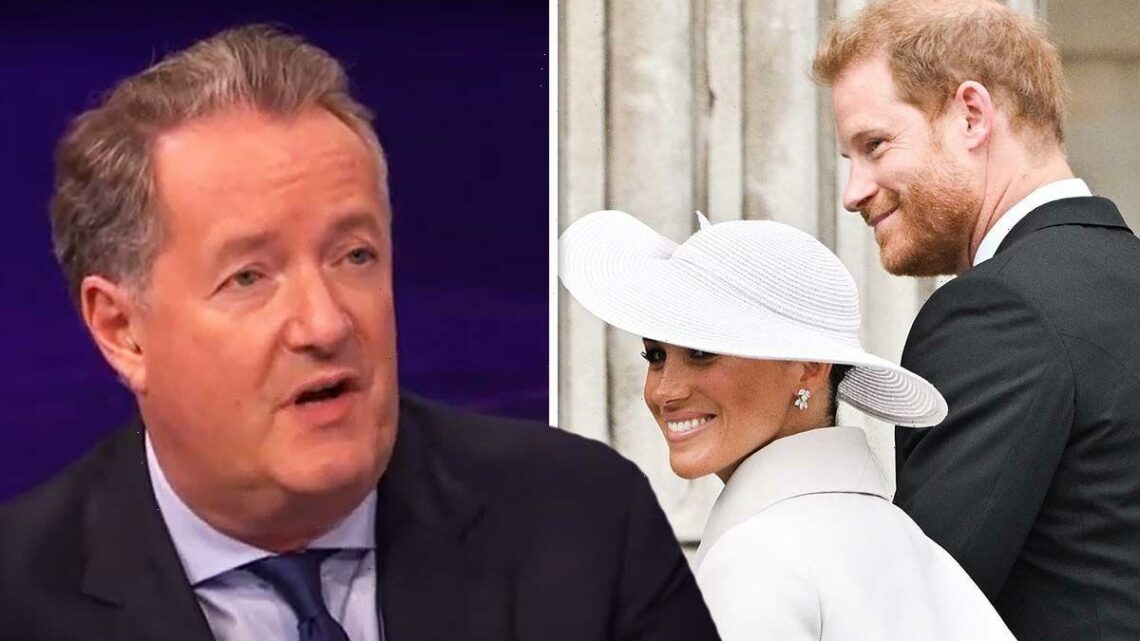 Harry and Meghan at the jubilee celebration was 'tense' says Piers

Piers Morgan, 57, has claimed that an insider told him Meghan Markle, 40, and Prince Harry’s, 37, reunion with the Royal Family was “pretty tense”. The Duke and Duchess of Sussex returned to the UK on Wednesday and made their first appearance the following day to watch Trooping the Colour.

While senior royals including Prince William, Kate Middleton and Prince Charles joined the Queen on Buckingham Palace’s balcony to watch the RAF flypast, Meghan and Harry watched from a window and were not part of the carriage procession.

Speaking on his TalkTV show, Piers Morgan Uncensored, the host said that royal sources informed him that the atmosphere was “frosty”.

He adds that while other members of the Royal Family mingled in the garden following Trooping the Colour, Meghan and Harry “disappeared”.

He said: “I was told by a very good source that it was pretty tense behind the scenes.

“Apparently there was some disquiet from Palace officials that Meghan and Harry turned up apparently 15 minutes late.

“Not for the actual start of the parade but 15 minutes later than they were supposed to.

“Apparently it was all quite frosty behind the scenes.

“The rest of the family went out in the garden and were milling around, and they just disappeared.

“So, there is already a lot of tension there and the only glue it seems in this whole tension is the Queen, and she’s not going to be there.”

Piers went on to discuss today’s thanksgiving service at St Paul’s, which the Queen is not attending after she experienced “some discomfort” during Thursday’s events.

A statement from Buckingham Palace said: “The Queen greatly enjoyed today’s birthday parade and flypast but did experience some discomfort.

“Taking into account the journey and activity required to participate in tomorrow’s National Service of Thanksgiving at St Paul’s Cathedral, Her Majesty with great reluctance has concluded that she will not attend.”

Meghan and Harry arrived at St Paul’s Cathedral today and publicly reunited with the rest of the Royal Family for the first time in over two years.

The Duchess smiled as she walked up the stairs of the London cathedral in the company of her husband.

They arrived shortly before Prince William and Kate Middleton.

The quartet have not been seen together since the Sussexes final engagement as working royals at the Commonwealth Day service in March 2020.

Since then, the couple relocated to California and have had another child, Lilibet ‘Lili’ Diana.

It is understood that the Queen finally met her great-granddaughter for the first time when Meghan and Harry brought her to a special lunch.

Their three-year-old son Archie was also present, making it the first time the Queen has seen him since the Sussexes stepped down from royal duties and moved to America.

Zara Tindall attends Service of Thanksgiving for the Queen